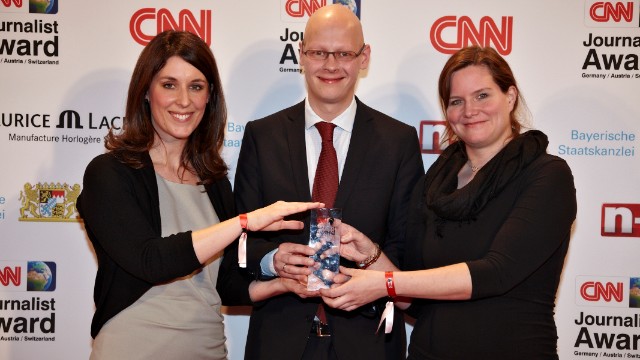 (L-R) Anne-Kathrin Thuringer, Matthias Deiss and Eva Muller pose with their award after scooping both the TV category and CNN Journalists of the Year.
STORY HIGHLIGHTS

Munich, Germany (CNN) -- A documentary about the murder victims of a German neo-Nazi terror cell has scooped the top prize at this year's CNN Journalist Awards ceremony in Munich.

"Eight Turks, One Greek and a Policewoman" -- by Matthias Deiss, Eva Muller and Anne-Kathrin Thuringer -- won both the CNN Journalists of the Year award and TV category Thursday night. The awards are open to young German journalists.

The report, which aired on German television, tells of the search for answers following the "Doener Murder Series" -- a string of fatal attacks across Germany which took place between 2000 and 2007, leaving 10 people dead. The killings were committed by suspected members of the National Socialist Underground. The journalists' search for the victims' families led them to discover an alleged murder target who is still alive.

Full coverage of the CNN Journalists of the Year award (German) 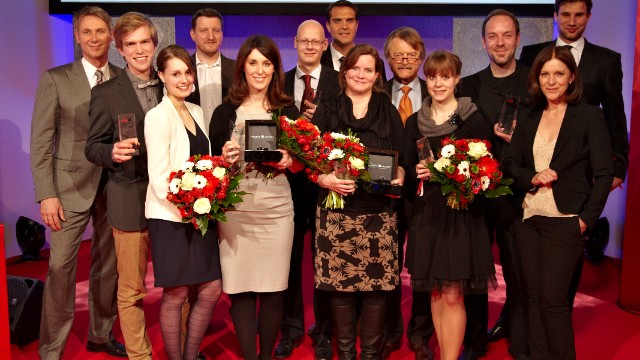 Jurors commended the recipients for their well-researched, investigative journalism. "The journalists showed persistence to stay on an explosive topic, putting it into a new perspective in the focus of attention," said Franz Fischlin, head of the awards panel.

Watch video of the CNN Journalists of the Year award

Print category honors went to Takis Wurger of Der Spiegel, who accompanied a unit of German marksmen in Afghanistan. The piece told the story of Christian Sommerkorn, a soldier who is waiting to kill someone for the first time in his life.

Sabine Rossi's "Call From Damascus," in which a young father in the Syrian capital regularly discusses the Syria unrest via telephone, won the best Radio category. Jurors praised Rossi's ability to provide the WDR Funkhaus Europa listeners with "a direct insight into the life and fate of a family."

Also recognized were Salome and Lukas Augustin, who won the Online category, for their video piece "Afghanistan -- Touch down in flight." Their film posed the question to viewers: What do we have in common with the people in Afghanistan? It displayed vivid footage of everyday life in the country without the use of words, text or links and was first published on iPad app Suddeutsche Zeitung Magazin before it went viral on the Internet.

Originally published in Liga -- the magazine for the Austrian League of Human Rights -- Fabian Weiss' portraits of "Lesbian Women in China -- A life bordering on life" focused on the women at the LaLa Shalongs in Beijing, a meeting place for lesbians. Judges awarded Weiss top accolade in the photographic category and said his work was "poetic, expressive and very authentic."

Tony Maddox, Executive Vice President of CNN International, said: "These young journalists and press photographers who are nominated for the eighth CNN Journalist Award have had the courage to cover difficult topics in a distinctive way. They give a face to stories which would not have been brought to the focus of society without their attention and their relentless journalistic curiosity."

"Underpinning the sheer courage of this year's reporting on controversial sometimes inconvenient issues that more often evade the spotlight is an intense regard for detailed research. The importance of this quality can be overlooked but is an integral facet to quality journalism."