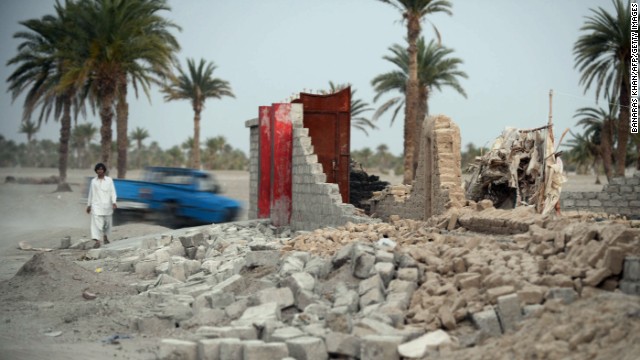 An earthquake survivor walks past a collapsed house in the Mashkell area of Pakistan's Baluchistan province on Thursday, April 18. The casualty count from an earthquake that struck near Pakistan's border with Iran stands at 35 dead and more than 150 injured, authorities said Wednesday. 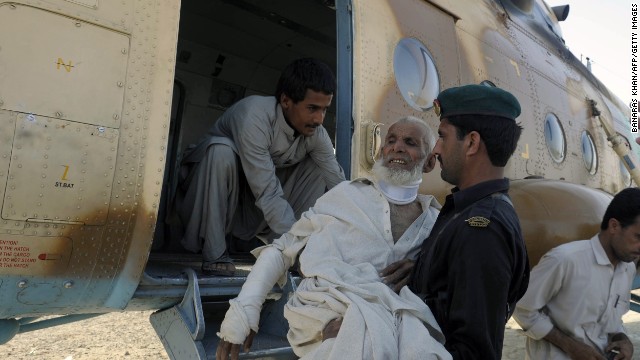 A Pakistani Frontier Constable carries an injured earthquake survivor into an army helicopter in Mashkell on Thursday. 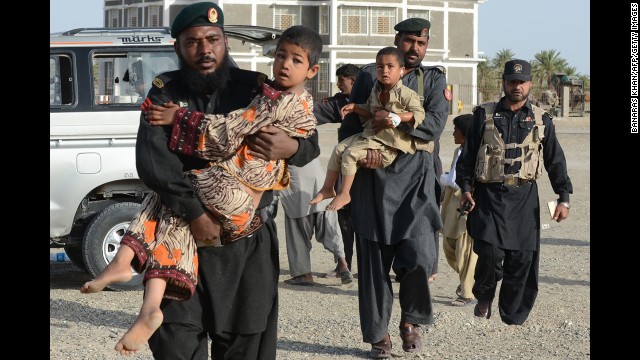 Pakistani Frontier Constables carry survivors toward an army helicopter in Mashkell on Thursday. 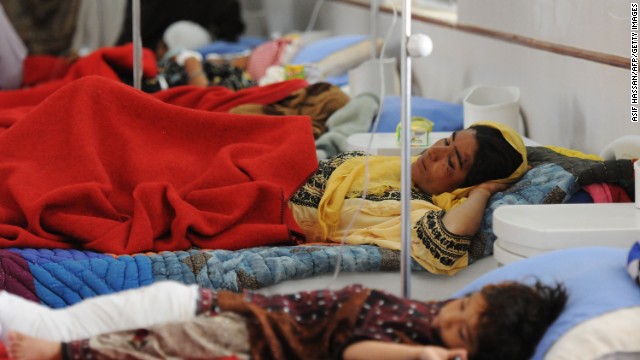 Earthquake victims lie on beds at a military hospital in Quetta, Pakistan, on Wednesday. 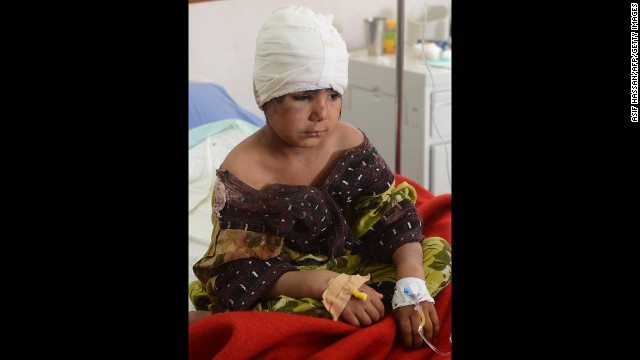 An injured Pakistani girl sits on a hospital bed in Quetta on Wednesday. 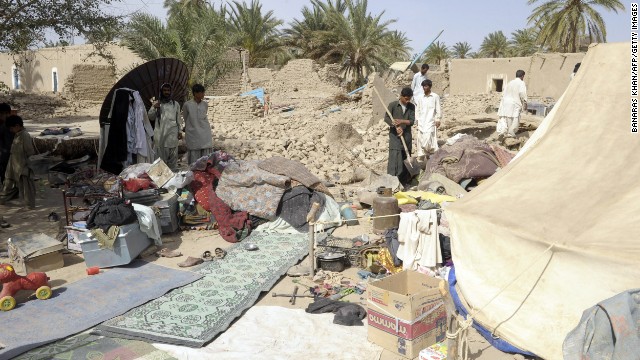 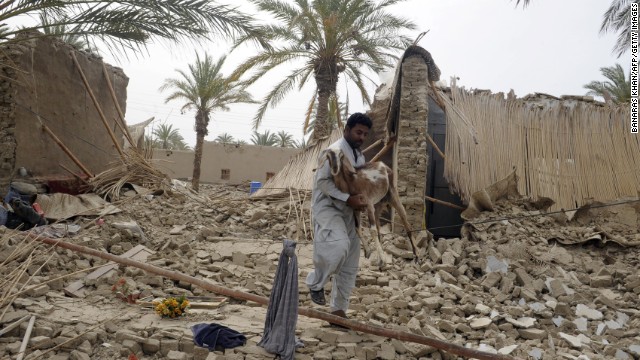 An earthquake survivor carries a goat through the rubble in Mashkell on Wednesday. 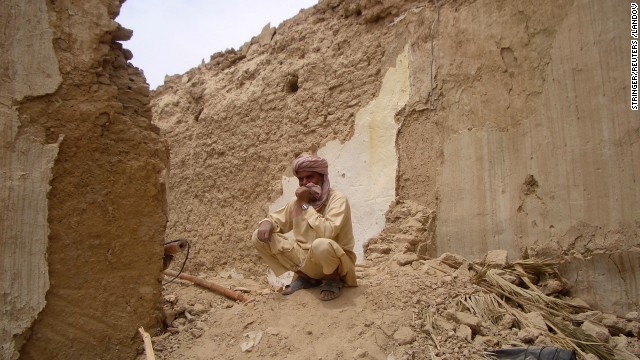 A Pakistani man sits on the remains of his mud house in Mashkell on Wednesday. 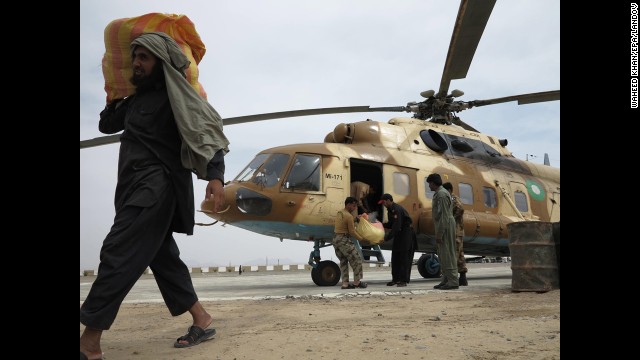 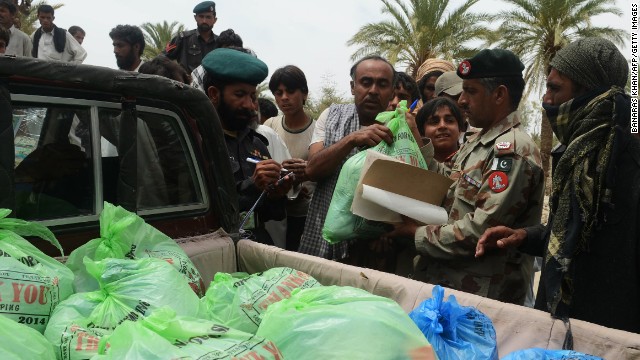 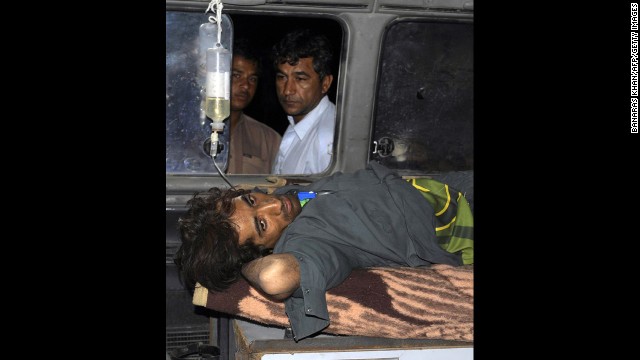 An injured Pakistani man lies in an ambulance outside a hospital in the town of Dalbandin in southwestern Baluchistan province on Wednesday. 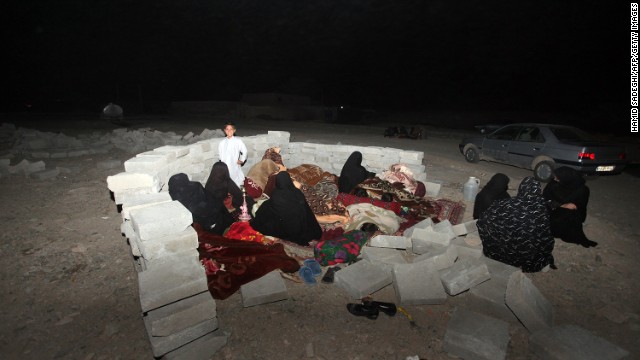 Iranian residents take shelter in a field after the earthquake in the city of Saravan in southeastern Iran on Tuesday, April 16. 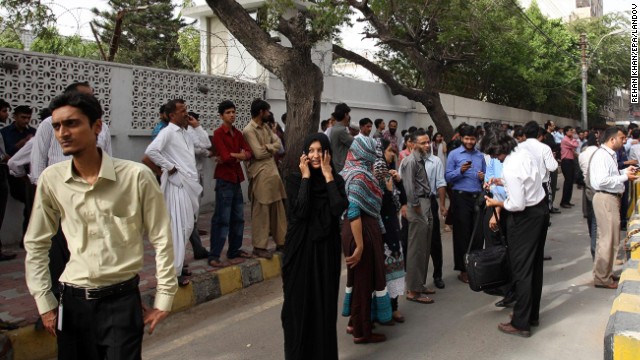 People evacuate buildings in Karachi, Pakistan, following a powerful earthquake near the border with Iran on Tuesday, April 16. 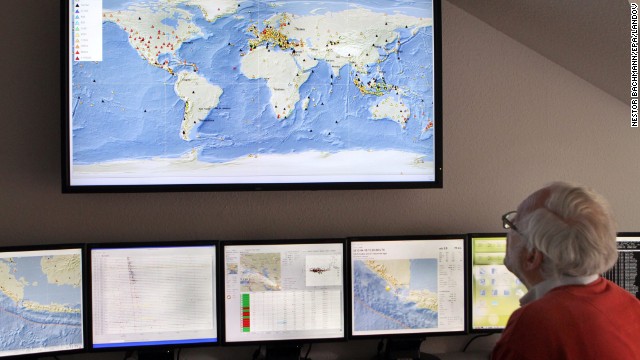 A scientist from the German Research Center for Geosciences looks at the earthquake region in southeast Iran on Tuesday from Potsdam, Germany. 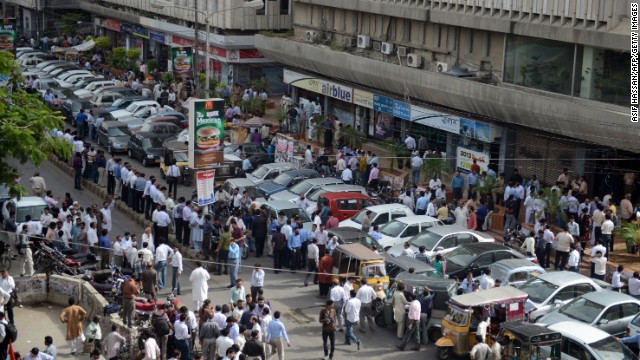 People stand outside after evacuating buildings following tremors in Karachi. 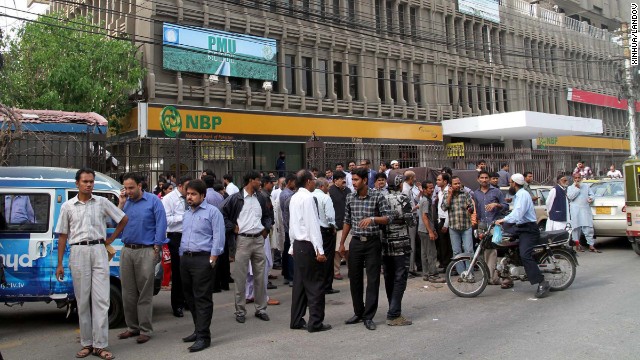 People stand outside in Karachi after the quake on Tuesday. 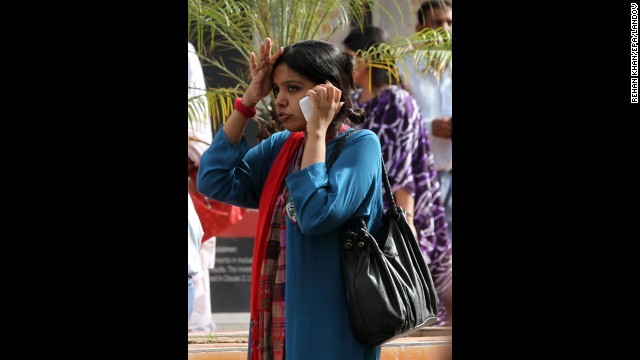 A woman talks on the phone after she was evacuated along with hundreds of other workers on Tuesday in Karachi. 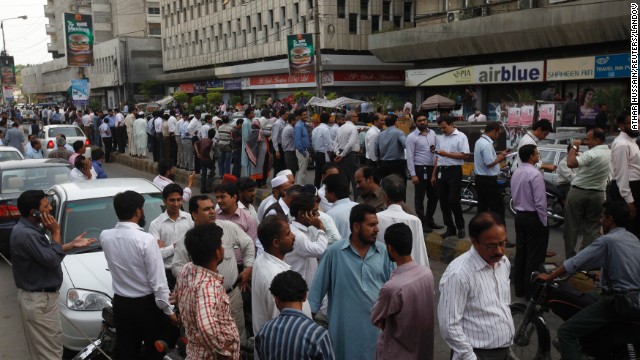 Are you in the region, and did you feel the quake? Send us your images and experiences, but please stay safe.

(CNN) -- At least 34 people have died and 80 are injured in Pakistan after a powerful earthquake struck near the country's border with Iran, sources tell CNN.

Army doctors and Frontier Corps paramilitary forces are taking part in rescue efforts in Mashakel, according to a Pakistani official involved in relief efforts.

Officials earlier said that dozens more were injured in both countries.

Akbar Hussain Durrani, home minister of Pakistan's Balochistan province, confirmed that six people had died and more than a dozen were injured in the province's Washuk district.

The quake injured a dozen people in southeastern Iran, authorities said. They were treated at a hospital, the Crisis Management Office of Sistan and Baluchestan province reported. No one was killed, said Reza Arbabi, the office's director.

Earlier Tuesday, Iran's semiofficial Fars news agency quoted a politician from the province as saying that 40 people had been killed in the earthquake.

However, Arbabi and Sistan and Baluchestan Gov.-general Hatam Narouie disputed that there were deaths.

Fars later quoted Narouie as saying, "Fortunately, the quake did not cause any deaths or serious property damage. Telephone lines are now working, and water and electricity (are) normal."

Narouie told Fars that the news outlet should rely only on information from the crisis office.

The quake destroyed more than 50 shops in the Washuk district, Durrani said.

"Thank God it doesn't appear that there is too much destruction," a disaster official said on a broadcast by Iran's IRIB from the city of Khosk.

The official described seeing five injured people and some cracked or collapsed walls but no sign of major damage.

The epicenter of the quake, which struck about 3:15 p.m. local time, was about 50 miles (80 kilometers) north of the city of Saravan, according to the Iranian Seismological Center.

A state of emergency has been declared in the Saravan area, and rescue workers have been deployed from other provinces, Iran's state-run IRNA news agency reported.

"Our teams have been deployed to the area for the first rapid assessment, but they have not reported back yet," said Hassan Esfandiar, head of communications for the Iranian Red Crescent.

The area is rural and sparsely populated, leading to hopes that casualty figures may not climb much higher.

Carrieann Bedwell, a USGS seismologist, said a 7.8-magnitude quake was "a large event for any area" and could be expected to cause damage in inhabited places.

No effects have been reported on any nuclear plants in the region.

Interactive: Measuring the magnitude of earthquakes

Aftershocks can be expected for days or weeks after a quake of that magnitude, she said.

The USGS placed the epicenter 53 miles east-southeast of Khash, 103 miles northeast of Iranshahr and 123 miles southeast of Zahedan.

It initially said the quake had a depth of 15 kilometers (9.3 miles) but later revised that to 82 kilometers (51 miles.)

Shafiq Ahmed, an official with Pakistan's meteorological department, said the tremor, which he put at magnitude 7.9, struck inside southern Iran, near the border with Pakistan.

Tremors were felt in southern Pakistan, including the city of Karachi, and across Balochistan province from Gwadar on the southern coast to Quetta and the border with Iran.

Taghi Akhavan, an employee at Shaygan Hotel on the Iranian resort island of Kish, said he felt the quake about 3:30 p.m. local time.

He said several guests also reported feeling what they described as a mild tremor, but the hotel did not evacuate guests. He said he has not seen any damage.

Journalist Rabia Ali was among those to feel the quake in Karachi.

"I was at home. I was in my bed, and the bed started moving for a good 15 seconds," she said. "We realized it was an earthquake, and we started evacuating. Everyone came out onto the street and started praying. The children were crying."

She said that she had not seen any damage in her neighborhood and that things have now calmed down.

The earthquake was felt as far away as Abu Dhabi, where buildings shook for 40 seconds or more, but it's not clear what damage has been caused across the region.

The lest earthquake comes on the heels of another last week in southern Iran, which left at least 37 people dead.

That quake, centered near the city of Kaki, was measured at magnitude 6.3. It did not damage the Bushehr nuclear plant, just over 60 miles away, according to Iranian state media.