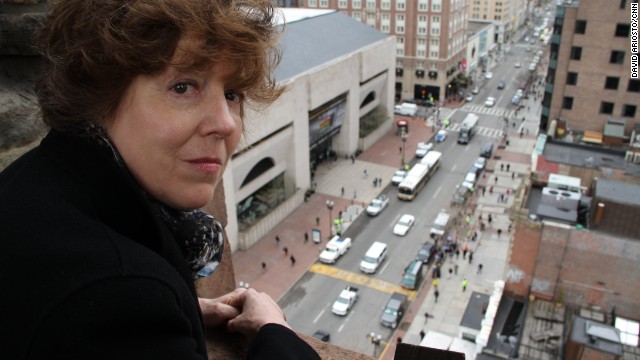 Boston (CNN) -- From her perch atop a church bell tower high above downtown Boston, Nancy Taylor watched as runners from all over the world trudged down Boylston Street for the final stretch of the city's 117th annual marathon.

"People often call it the 'Marathon Church,'" said Taylor, a senior minister and CEO of the Old South Church in Boston, pointing to the brush of blue and yellow paint that spell out the word "FINISH" in bold letters on Boylston Street's pavement outside.

The church's Colonial-era congregation -- which included Ben Franklin and the Americans who first gathered to plan the Boston Tea Party -- is part of the legacy of a city propped up by its past. The church reopened Monday as authorities removed the last remaining barricades to restore a semblance of normal life.

"There is no question that we are shaken," said Taylor. She doesn't think the city will be quite the same.

Many shops, restaurants and bars along Boylston Street have reopened since twin bombings at the marathon's finish line on April 15 killed three people and wounded more than 260 others.

Maura Guillet was sipping a mimosa with some friends at the Atlantic Fish Company when a fireball ignited outside her window.

"It was thunderous," she recalled. The restaurant, a Boylston Street fixture, remains closed as a result of the blast.

By most accounts, many in Boston seem to have come to terms what transpired, though a once-distant perception of terror has now become more personally felt in the days since the attack. 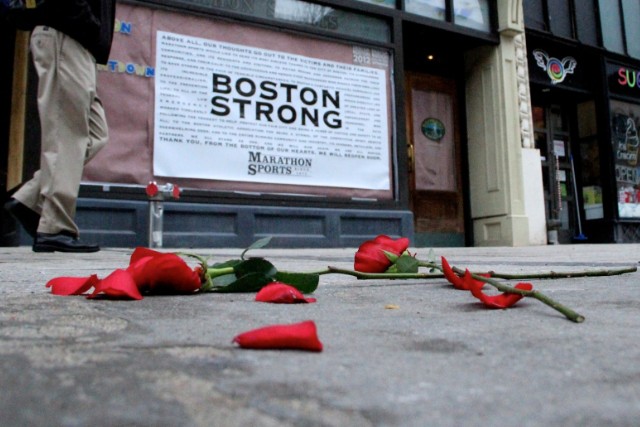 Flowers lie on the sidewalk adjacent to Boston's Boylston Street, which reopened a week after the twin terror bombings.
David Ariosto/CNN

"There's a pause and a fear, but we're not going to be defeated by two punks," said Gerardo DeFaeritiis, whose shoe store reopened Monday after being part of a crime scene for the past week.

Cleaning crews continue to mop up the remnants of glass and scattered debris, while painters splash green paint onto wrought iron gates and wooden moldings atop store fronts, blackened in last week's attack.

The courage I was witnessed from 246 feet up was amazing.
Nancy Taylor, senior minister, Old South Church in Boston

Dolly Lakkis, who owns an eyeglass store on Bolyston Street, said that returning to work brought an eeriness accompanied by sadness. A floral memorial sits directly outside her window, where passersby come to pay their respects.

She catches herself staring at it when work is slow.

After Boston: The pros and cons of surveillance cameras

"We're ready to get back to normal," she said. "We're not going to sit back and take it."

Tough talk is commonplace here, as hardy New Englanders appear to be keen to move on.

That sense of resiliency also seems inextricable from the city's history. Even younger residents drop off-the-cuff references to figures like Paul Revere in their casual bar-room banter.

Her stone church looms almost directly over the marathon finish line, where its 19th-century spire is a welcome sight to runners, signaling their 26.2-mile trek is nearly over.

Up until last week, the church had been shuttered only once in its history, which dates back to America's first European settlers.

"We were taken over by the British, who were a little upset with us because we dumped their tea," said Taylor, describing the only other time the church formally closed in 1775.

In runners' tent and ER, a rush to save lives, and limbs

From her vantage point view atop the church's 246-foot campanile, she witnessed the clouds of smoke and debris that filled Boylston Street after the blasts.

"One of most extraordinary things was watching people down on the ground sorting themselves out," she said. "Some people were running literally towards the danger to help people out.

There's a pause and a fear, but we're not going to be defeated by two punks.
Gerardo DeFaeritiis, Boylston Street store owner

"The courage I was witnessed from 246 feet up was amazing."

Now, residents who were directly and indirectly affected by the attack are returning to Old South Church looking for ways to cope with their trauma.

"I came today to pay my respects after picking up my medal," said Lauren Tourgee, a runner whose race was cut short by the attacks. "This is a place that's usually filled with happiness, especially on Marathon Monday."

Tom Ralston said he planned to return later in the week; it will be the first time that he will have seen the familiar downtown street since the second explosion ruptured his eardrums and left shrapnel buried deep in his hand.

"I don't know what to expect," said the longtime member of the Old South Church. "I have nightmares. I have flashbacks." 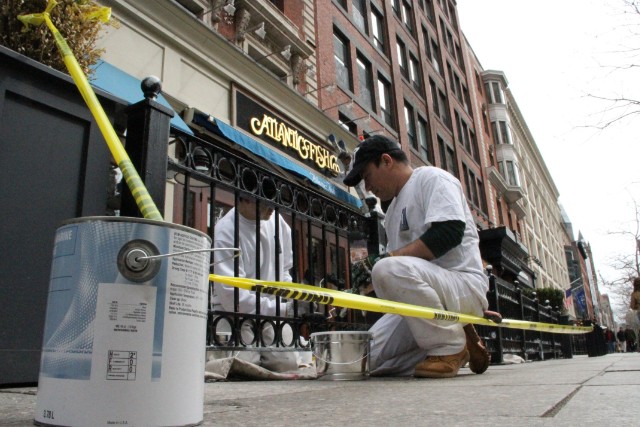 Workers at a Boylston Street restaurant paint over the damage caused by the Boston marathon bombings.
David Ariosto/CNN

Since the attacks, Ralston has sought counseling like many Bostonians.

"Talking with friends, and others like Nancy, are making me understand that the only way you're going to get through some of the worst parts of this is by talking," he said. "I think I've got a lot more talking to do."

But for the moment, a lingering trauma has left him still wary of public places.

"I actually turned down four wonderful Red Sox tickets for Saturday night because I'm not sure that I'm ready for an open-air crowd just yet," he said. "I'd have no idea who's sitting next to me or behind me."

After visiting Fenway Park "hundreds of times before," he's just going to wait.

Part of complete coverage on
Boston Marathon Bombings
Beyond Boston

Survivors of three earlier bombings describe their journeys forward — and offer poignant words for those just one year away from the day that changed their lives.
A year later, Boston perseveres
updated 2:15 AM EDT, Wed April 16, 2014

"United, we will always persevere." That was the message Massachusetts shared on the anniversary of twin bombings that turned last year's Boston Marathon from a celebration into a day of horror.
Why I'm running Boston again
updated 2:47 PM EDT, Tue April 15, 2014

I'm running it to make a simple statement: Acts of cowardice will not stop me from exercising my rights as an athlete and a human.
How to help survivors, one year on
updated 3:40 PM EDT, Mon April 14, 2014

Many of those whose lives were shattered are still struggling to put the pieces back together. Here are some of the victims, as well as larger funds, who continue to need your support.
How did Boston Marathon attack change you?
updated 11:22 AM EDT, Mon April 14, 2014

As April 15 approaches, the fact that we tell time in circles brings us to remember the attack on the Boston Marathon one year ago.
Bloody flag still carried by hero
updated 10:47 PM EDT, Mon April 14, 2014

CNN's Bill Weir talks to Carlos Arredondo about helping those injured immediately after the Boston Marathon bombing.
Why we're still running a year after Boston
updated 10:39 AM EDT, Mon April 21, 2014

By running in response to the tragedy, we weren't attempting to negate the irreparable harm done to the people of Boston last year. We wanted to do something, anything, to try to process it.
Four things we learned about the bombing
updated 7:24 AM EDT, Tue April 15, 2014

All of our assumptions have turned out to be wrong. Here are four things we've learned since then:
Dzhokhar Tsarnaev awaits trial
updated 4:17 PM EDT, Tue April 15, 2014

Adrianne Haslet-Davis' life as a dancer was shattered last year at the Boston Marathon bombings.
Survivor engaged and expecting a child
updated 7:40 AM EDT, Mon March 24, 2014

A man who lost both legs in the Boston Marathon attack is engaged to the woman he was waiting for at the finish line.
The victims: Krystle Campbell
updated 10:21 AM EDT, Wed April 17, 2013

Mistaken identity in the hospital added to her family's grief.
The victims: Sean Collier
updated 11:38 AM EDT, Wed April 24, 2013

The graduate student from China followed her passion to Boston.
The victims: Martin Richard
updated 1:10 AM EDT, Wed April 17, 2013

Mery Daniel couldn't wait for Marathon. It was one of the things the aspiring doctor and Haitian immigrant loved most about living in Boston.
Timeline: Bombing, manhunt and investigation
updated 9:09 AM EDT, Thu May 2, 2013

After twin blasts shook Boston -- killing three and wounding more than 260 others -- investigators sprung into action looking for those responsible.
The final hours that paralyzed Boston
updated 11:05 AM EDT, Sun April 28, 2013

The black Mercedes SUV sped down Spruce Street going about 70 mph, the driver struggling to maintain control. The vehicle had a busted headlight and flat tire.
Photo galleries: The Boston attacks

Click through our galleries of the Boston Marathon bombing, from perspectives on the attack to the suspects, as well as the manhunt and celebrations in Boston after both suspects were found.