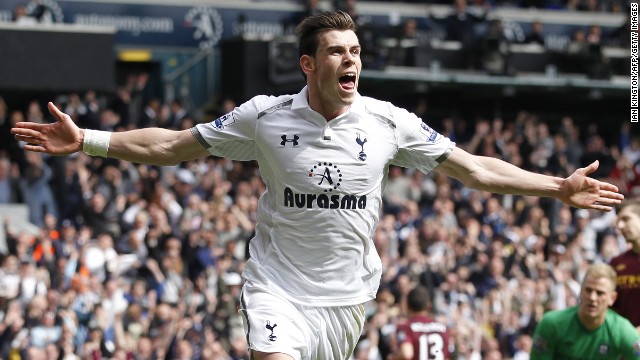 (CNN) -- it is common knowledge that Gareth Bale is a gifted footballer. But just how good is he?

"He will eventually work himself into the top one or two players in the world, he's that good," Spurs goalkeeper Brad Friedel told CNN. "The future is in his hands."

Real Madrid's Cristiano Ronaldo won both awards in 2007 while playing for Manchester United and Bale is now being compared to the Portuguese attacker and Barcelona's four-time FIFA Ballon d'Or winner Lionel Messi.

"He's a great professional, he works at his game every day.," added Friedel, speaking ahead of the award ceremony. "On top of that he's a very humble and good kid. He's a great servant to the game."

According to teammate Mousa Dembele, what makes Bale so talented is his ability to make match-winning contributions.

"He's an unbelievable player," said Dembele of the Welsh winger. "Everybody can see he's top class, and he can make the difference for us every game."

Dembele, who arrived at Tottenham following a high-profile move from Fulham at the start of the season, believes Bale is one of the best players on the planet.

And the Belgium international, who has impressed during his debut campaign at White Hart Lane, believes Bale is key to his club's chances of challenging the elite of European football.

"Everybody has a different style, but for me personally he's one of the best in the world," continued Dembele.

"If you know you have someone in your team who can do something and who can win games for us ... It's unbelievable."

The Welsh winger's hard work has paid dividends for Spurs this season.

Andre Villas-Boas' team sit fifth in the English Premier League table, with Bale's 19 goals in the competition putting Tottenham firmly in the hunt for a top four finish and qualification for the lucrative European Champions League.

Spurs have four matches left to play and sit two points behind fourth-placed Arsenal, who have just three games remaining.

Tottenham will qualify for Europe's premier club competition if they win their remaining fixtures.

While his teammates flocked to praise Bale, the former Southampton player was quick to acknowledge the contribution of his colleagues.

"It's a massive honor," the 23-year-old, who also picked up the Player of the Year award in 2011, told Spurs' official website.

"To be voted by your peers is one of the biggest things in the game. It's great to win it and I am delighted.

"When you look at the list there are some massive names on it but I couldn't have done it without the team. They have been fantastic this year and so has the manager.

"I couldn't have won it without them so I would like to give them all a big thank-you as well.

"The other nominees have been unbelievable, they have been outstanding for their clubs and it's a massive moment to win, especially as it's both awards and it's something that I'm extremely proud of."

Champions League qualification could be key to Spurs' hopes of keeping hold of Bale.

One way or another, he looks destined to join Messi and Ronaldo at football's top table sooner rather than later.