Bangladesh vs. the U.S.: How much does it cost to make a denim shirt? 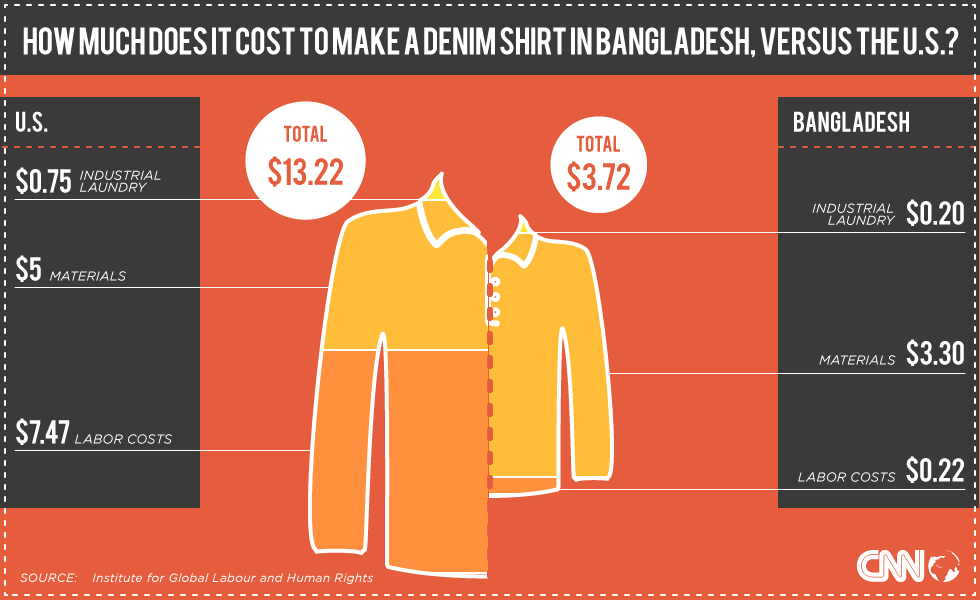 (CNN) -- The collapse of the Rana Plaza garment factory in Bangladesh last week, which killed more than 500 workers, has highlighted serious issues with safety and poor pay for garment workers in the country. As our graphic illustrates, there are stark contrasts in the cost of making clothes in Bangladesh, compared to the U.S.

The garment industry accounts for 77% of Bangladesh's exports -- a $20 billion industry for the nation.

The European Union, Bangladesh's largest trade partner, said Tuesday that it was considering trade action against Bangladesh. U.S. State Department spokesman Patrick Ventrell said businesses that operated in the collapsed building "appear to have links to numerous companies in the U.S. and Europe." He added they would work with U.S. companies on "improving working conditions, including in Bangladesh."

READ MORE: The bloodshed behind our cheap clothes

Part of complete coverage on
Tragedy in Bangladesh
The seamstress in the rubble
updated 5:36 PM EDT, Wed May 15, 2013

Reshma, the last survivor of the collapse, describes 17 harrowing days buried underground in pitch-black darkness.
How can one survive 16 days in rubble?
updated 3:49 AM EDT, Mon May 13, 2013

A well-placed pool of water and an air pocket appear to have combined to help a young woman survive in the rubble for more than two weeks.
Opinion: Stop cashing in on workers
updated 3:15 PM EDT, Thu May 9, 2013

Questions remain over who was ultimately responsible for the Bangladesh tragedy. Is the huge profit buyers make on clothes ethical?
Cost comparison: U.S. vs Bangladesh
updated 7:30 AM EDT, Fri May 3, 2013

It costs more than three times as much to make a denim shirt in the U.S. as it does in Bangladesh. We break down the numbers.
Bangladesh's PM: 'Accidents happen'
updated 4:27 PM EDT, Thu May 2, 2013

CNN's Christiane Amanpour asks Bangladesh's prime minister why more wasn't done to prevent a building collapse which killed more than 400.
Bangladesh: We will fix industry
updated 6:50 AM EDT, Fri May 3, 2013

Prime Minister acknowledges nation's garment industry is beset with problems, but says her government is trying to fix them.
'My heart hasn't stopped breaking'
updated 3:08 PM EDT, Tue May 7, 2013

A nurse who was meant to be on the Boston Marathon finishing line finds herself treating trauma victims in Bangladesh.
The true cost of producing a T-shirt
updated 5:51 PM EDT, Thu May 2, 2013

CNN's Richard Quest talks to the editor of Women's Wear Daily, James Fallon, about the garment industry in Bangladesh.
Calls for action after factory collapse
updated 5:23 AM EDT, Thu May 2, 2013

CNN's Jim Boulden reports on the growing pressure on clothing companies after a Bangladeshi garment factory collapsed.
Why Bangladesh said no to aid
updated 6:04 AM EDT, Wed May 1, 2013

Journalist David Bergman discusses why the Bangladeshi government said no to international rescue offers.
'Bloodshed' behind cheap clothes
updated 9:48 AM EDT, Fri May 3, 2013

Despite the many warnings of dangerous cracks in the walls. thousands were still sent to work to proceed with business as usual.
Shahina's death brings grief to fore
updated 6:04 AM EDT, Tue April 30, 2013

After so much horror and heartache, the death of one woman they were trying to rescue was too much for emergency crews.
Trauma beneath Dhaka factory rubble
updated 3:05 PM EDT, Tue May 28, 2013

Fire breaks out in the rubble of a collapsed Bangladesh building, and one girl recalls the choice she was given: Your hand or your life.