(CNN) -- Tropical Cyclone Mahasen jogged northward Thursday prior to striking the coast of Bangladesh, averting the widespread disaster that government authorities had prepared for.

Still, at least 12 people were killed, thousands of thatched houses were damaged and trees uprooted, the state news agency said.

"The damage was not that much what we feared, and people who took shelters have already started moving to their houses as the weather is becoming almost normal," he said.

Bangladeshi authorities had relocated hundreds of thousands of people in vulnerable areas to safer ground ahead of the storm's arrival. 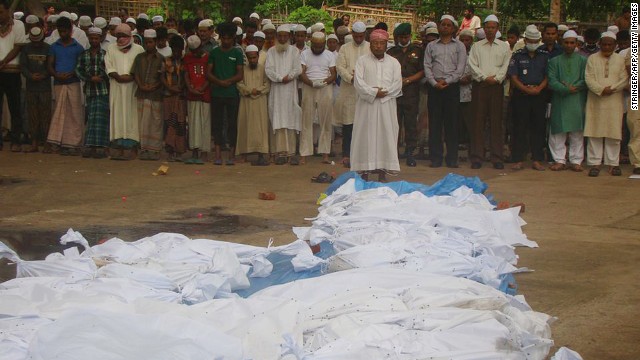 Bangladeshi men pray in front of the bodies of victims of Cyclone Mahasen in Tekna, south of Dhaka, on Friday, May 17. The bodies washed up on the shores of Bangladesh after the victims' boat capsized while sailing from Myanmar. At least 12 deaths have been reported in Bangladesh due to the cyclone. 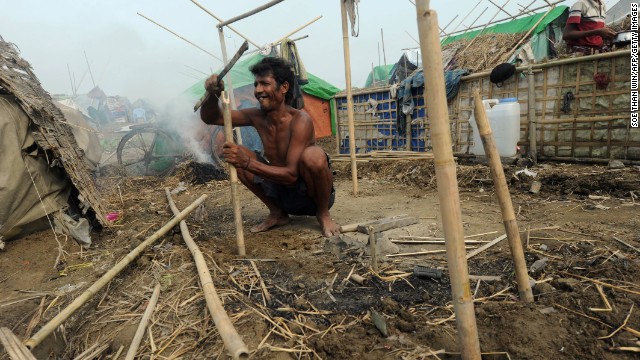 A man works on a tent after arriving at a camp for internally displaced people in the village of Mansi, Myanmar, on Friday, May 17. Safety concerns prompted authorities and relief agencies to try to relocate tens of thousands at these makeshift camps as Tropical Cyclone Mahasen neared. 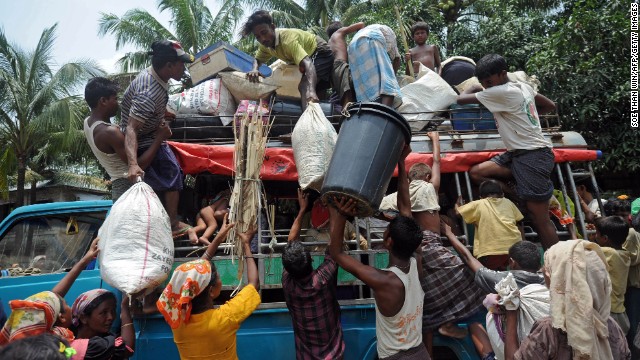 Families load their belongings onto a truck before returning to a temporary relief camp at a mosque in Thetkaepyin, Myanmar, on May 17. 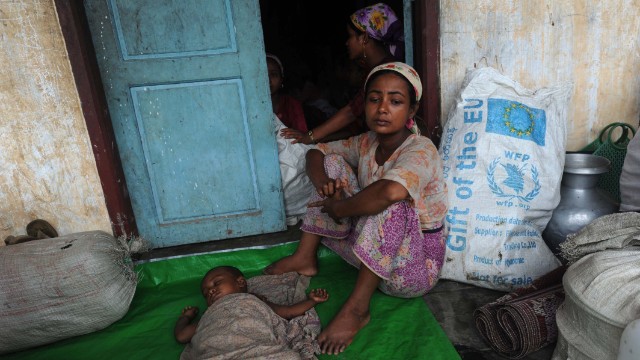 Members of a displaced Rohingya Muslim family rest at a camp outside Sittwe, Myanmar, on Thursday, May 16, as heavy rains and strong winds from Tropical Cyclone Mahasen lash coastal areas. 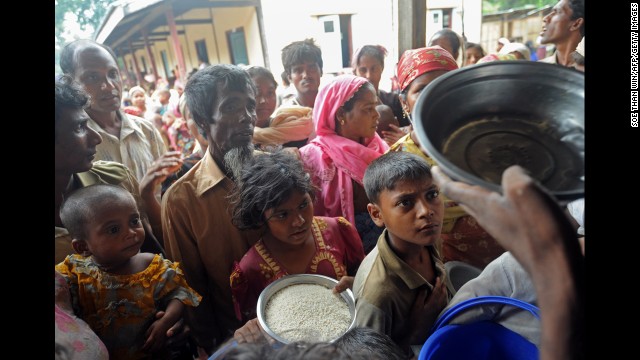 A group of Rohingya families wait for rice supplies at a temporary relief camp near Sittwe on May 16. 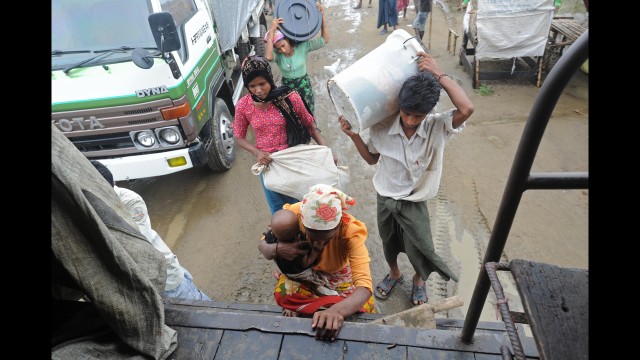 Rohingya family members board a truck with their belongings as they prepare to move from tents to a safer area on May 16. 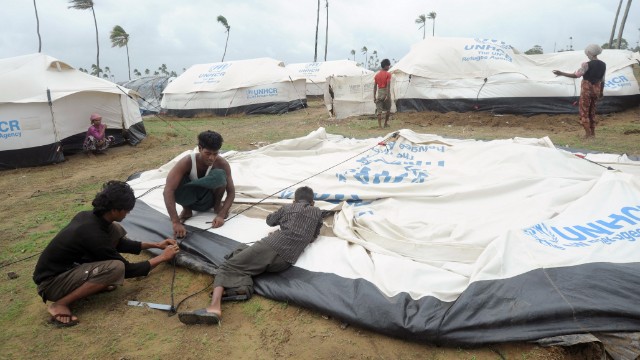 Rohingya men dismantle their tent as they prepare to move to a safer area on May 16. 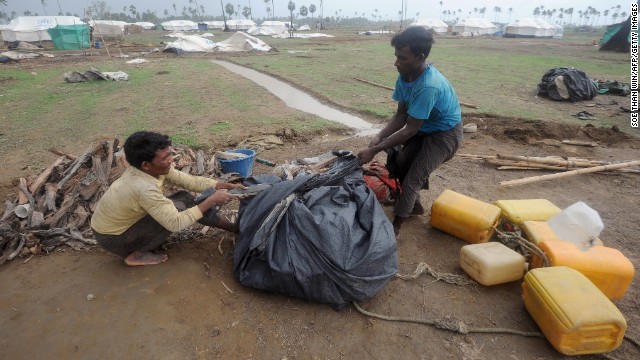 Rohingya men pack their belongings as they get ready for the move on May 16. 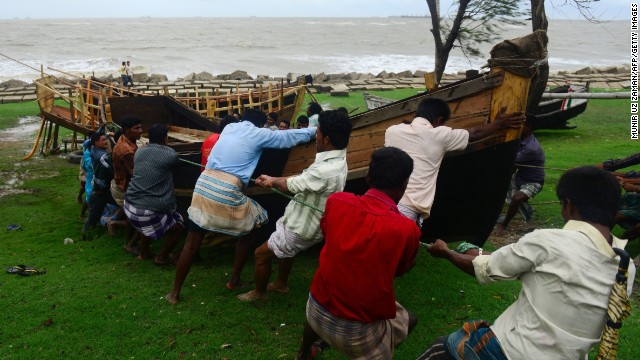 Bangladeshis pull a boat away from a beachfront in Chittagong on May 16 as Tropical Cyclone Mahasen approached. 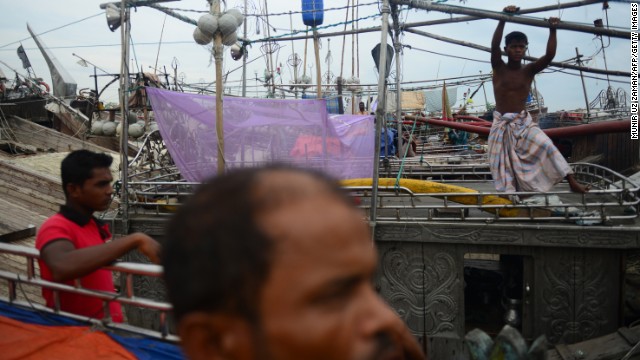 Bangladeshi fishermen tie up their vessels in the Chittagong Harbor on Wednesday, May 15. 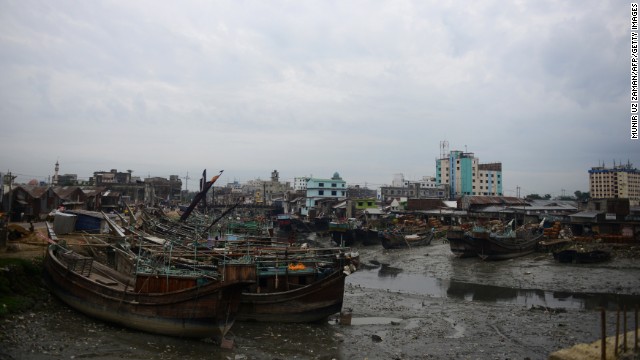 Fishing boats are tied up in Chittagong on May 15. The storm is forecast to make landfall late Thursday or early Friday in southeastern Bangladesh, near the port city of Chittagong. 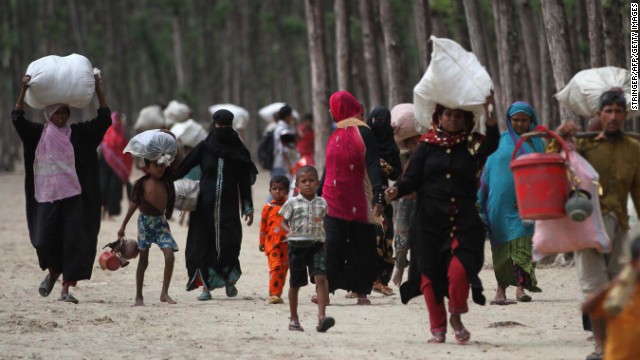 Bangladeshi evacuees head toward shelters on May 15 in Cox's Bazar. 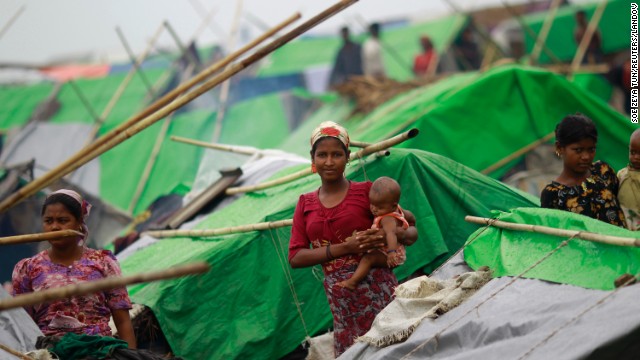 Women pass time in a Rohingya displacement camp outside Sittwe, Myanmar, on May 15. Authorities and relief agencies have been relocating tens of thousands of internally displaced people at camps throughout the low-lying region. 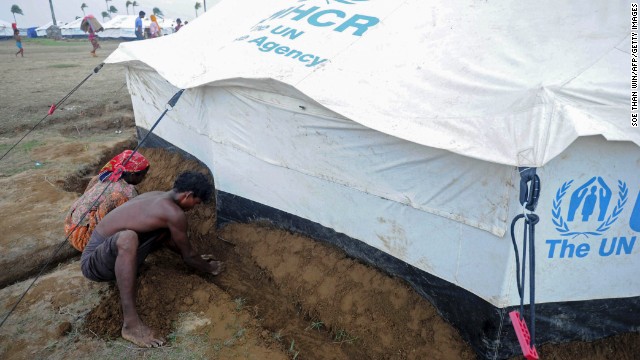 Displaced Rohingyas dig a drainage ditch around a relief tent at the Ohnedaw camp on the outskirts of Sittwe on May 15. Rohingya people are a stateless Muslim minority who suffered during decades of military rule in Myanmar. 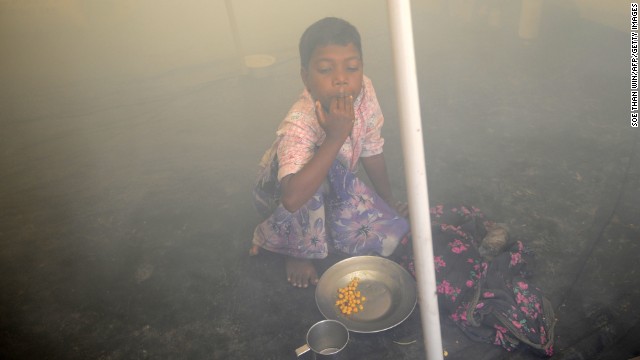 A Rohingya child has breakfast inside a relief tent at the Ohnedaw camp on May 15. 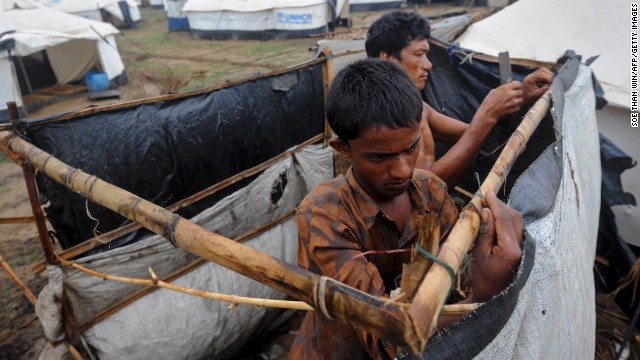 A man fixes his tent on May 15 at the Ohnedaw camp. 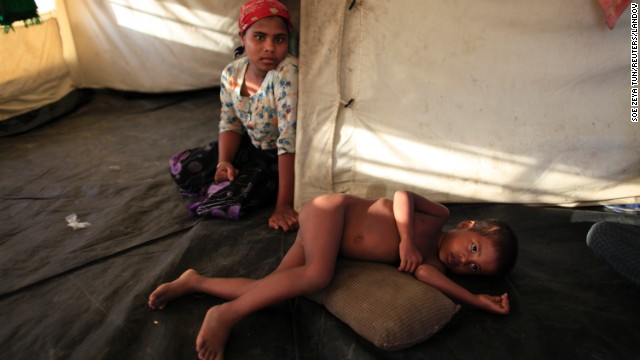 A Muslim family rests in their temporary shelter outside Sittwe on May 15. 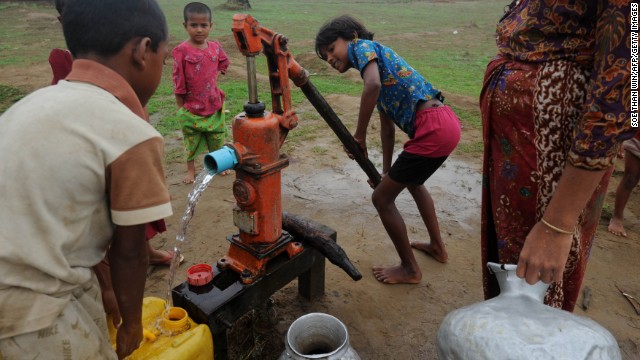 Children pump water at the Ohnedaw camp near Sittwe on May 15. 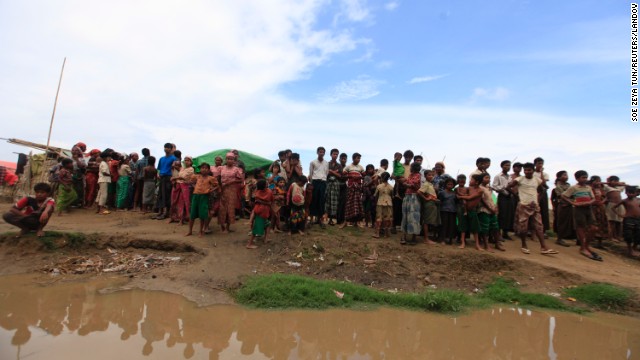 Thandawli villagers stand by the bank of a river in a displacement camp outside Sittwe on Tuesday, May 14. 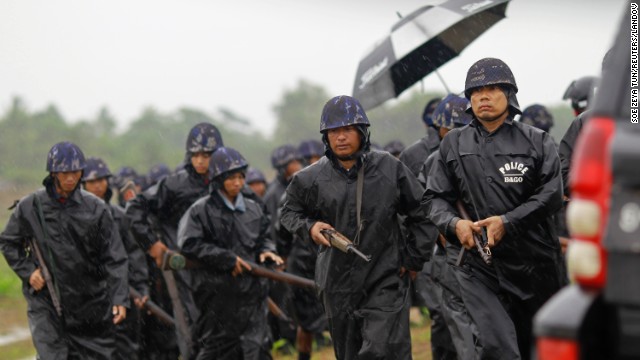 Police officers walk in the rain as they guard a Rohingya displacement camp outside Sittwe on May 14. Efforts to relocate some of the displaced appeared to be hindered by distrust of the security forces involved. 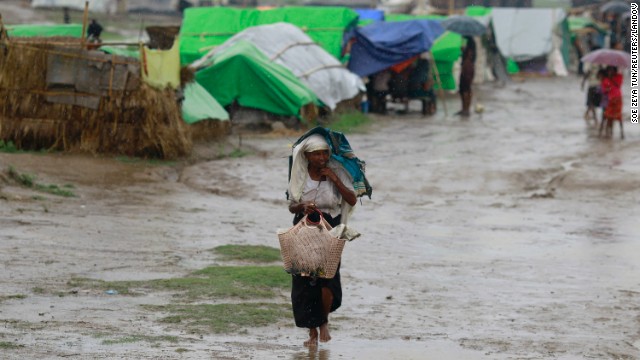 A woman from the Thandawli village walks through the rain in a Rohingya displacement camp outside Sittwe on May 14. 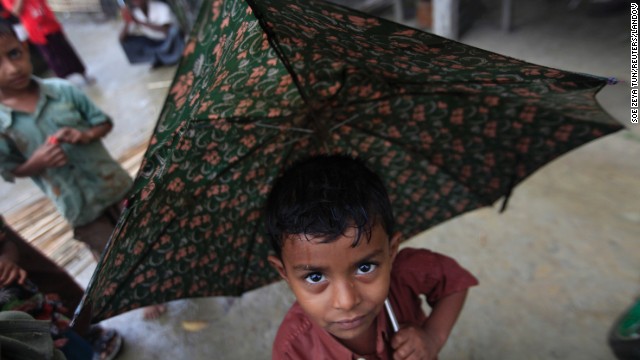 A boy from Thandawli shelters himself from the rain in the Rohingya camp near Sittwe on May 14. 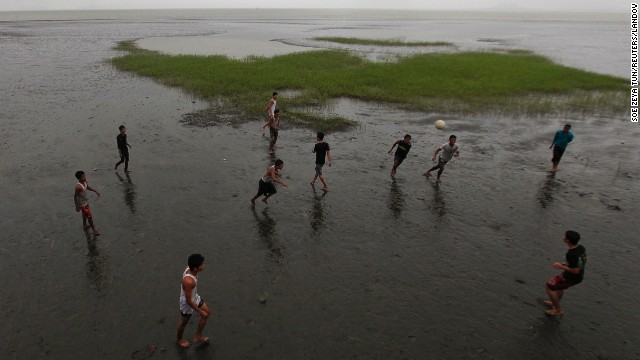 Young men play soccer on the beach in Sittwe on May 14. 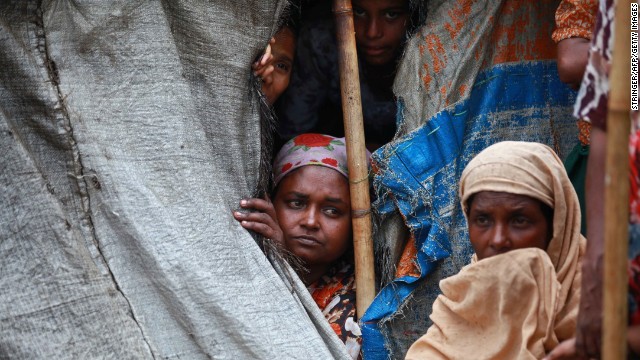 Muslim Rohingya women sit inside a tent at the Mansi displacement camp in Sittwe on May 14. 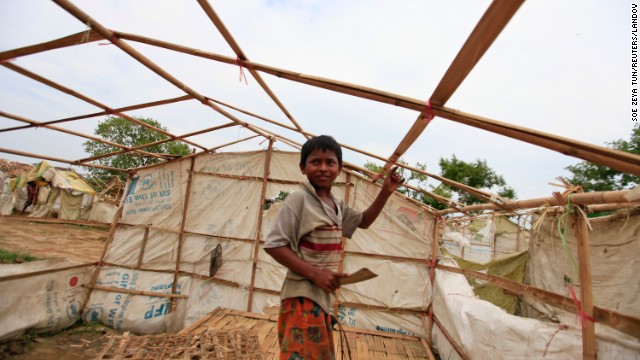 A boy dismantles his tent near Sittwe before moving to safer ground on Monday, May 13, in light of the approaching cyclone. 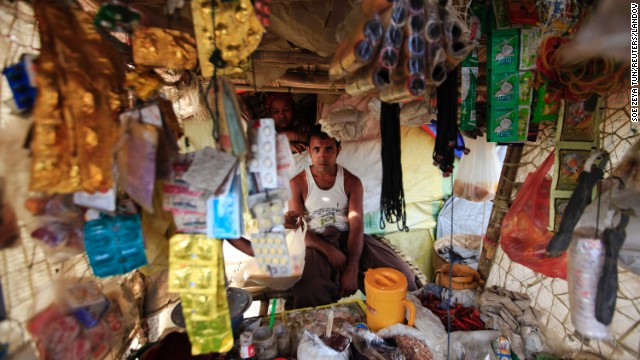 A man sits inside a tent that he has turned into a makeshift shop at a displacement camp for Muslims outside Sittwe on May 13. 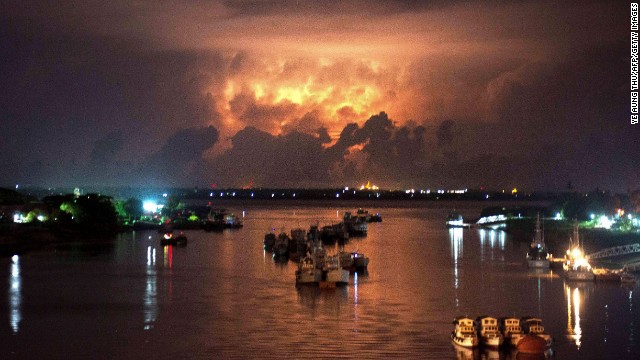 Authorities had suspended port activities at Chittagong, a major transport and commercial hub, and canceled all flights to and from the city's airport.

The United Nations Office for the Coordination of Humanitarian Affairs had warned that Mahasen could put millions of people in the surrounding region at risk.

On Wednesday, aid agencies and local authorities scrambled to prepare residents and to put emergency supplies in position.

Bangladeshi authorities relocated at least half a million people from the coastal districts of southeastern Bangladesh, the top administrative officer of Chittagong Division said.

The OCHA put the number of people ordered to relocate by the Bangladeshi government at 1 million nationwide.

A vulnerable group in Myanmar

On Rakhine's coast, Myanmar authorities and relief agencies worked to relocate tens of thousands of Muslims who had been living in makeshift camps in low-lying areas since last year, when their homes were destroyed in sectarian violence.

Most of them are Rohingya, a stateless Muslim minority who suffered during decades of military rule in Myanmar.

Sectarian violence erupted last year in Rakhine between Buddhists and Muslims, resulting in the deaths of scores of people, most of them Rohingya. Since then, more than 100,000 Muslims have been forced to live in camps.

In a report last month, the advocacy group Human Rights Watch accused Myanmar authorities of involvement in a Buddhist campaign of "ethnic cleansing" against the Rohingya in Rakhine. The Myanmar government dismissed the report as "one-sided."

The efforts to relocate some of the displaced Rohingya living in the camps appear to have been hindered by distrust of the security forces involved.

On Monday night, a boat ferrying people from one camp in Rakhine to safer areas hit rocks and capsized, the OCHA said, citing the government. Fifty-eight people were missing and an unspecified number died, the agency said.