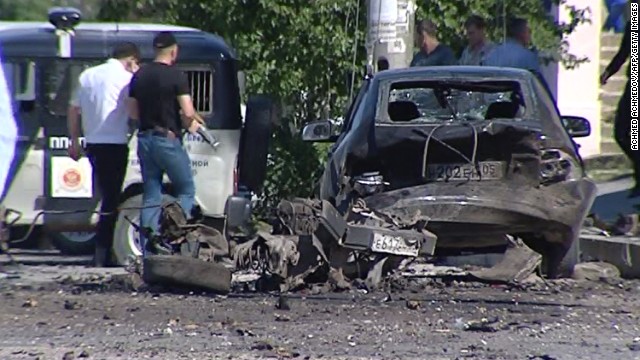 A video grab made on May 20, 2013 shows a blast site outside a building used by court bailiffs in central Makhachkala.
STORY HIGHLIGHTS

Thirty-one of the injured were hospitalized, it says.

The incident -- which occurred in Makhachkala, capital of the semi-autonomous republic of Dagestan -- also caused significant damage. Security officials say they believe law enforcement officers may have been the target because the explosion occurred outside a local marshal's building.

One car bomb was discovered by a police patrol, who called in a unit to defuse it. Before that could be done, the bomb went off, but the explosion was minor, security officials said. Then, as a crowd of people gathered, a second, more powerful device detonated, causing the casualties.

An Islamic insurgency has taken hold in the North Caucasus and there is a strong presence of Islamic militants fighting Moscow's rule.

Tamerlan and Dzhokhar Tsarnaev -- the suspects in the Boston Marathon terror attack last month -- had ties with the region. The brothers are ethnic Chechens who lived in Kyrgyzstan and Dagestan.

Authorities who've been investigating how the brothers became radicalized are interested in a trip Tamerlan Tsarnaev took to Dagestan last year.

Russian authorities asked U.S. officials to investigate Tsarnaev before the trip, saying they believed he was becoming increasingly involved with radical Islam. The FBI investigated, but found no evidence of extremist activity, FBI Director Robert Mueller told a Senate committee.

Dzhokhar Tsarnaev is in custody. His older brother died after a shootout with police just outside Boston days after the bombing.

READ MORE: Keys to Boston attack could lie half a world away in restive region of Russia

Russia has been on edge over militant activity and its security forces announced on Monday that they foiled a terror attack planned for Moscow.

A spokesman at the National Anti-Terror Committee said security forces killed two militants and detained another. All three are described as Russian citizens trained in Afghanistan and Pakistan, he said. Security forces conducted their operation in the Orekhovo-Zuevo region of the Moscow suburbs.

"They were planning a terror attack in Moscow," the spokesman said.

No civilians were injured during the operation, but one Federal Security Service officer was wounded, state news agency Ria Novosti reported, citing an unnamed security source. The source said the attack was planned for central Moscow.

Former Chechen rebel: 'I have nothing to do with' Boston bombings