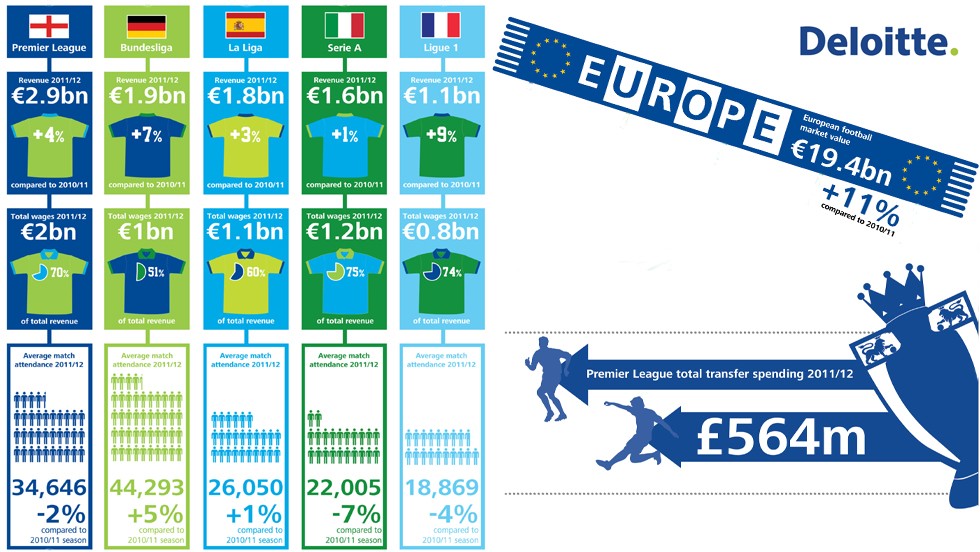 London (CNN) -- The German Bundesliga has set the standard on the football pitch in recent months, now the league's bank accounts are the envy of Europe after a report declared the competition to be the continent's most profitable.

The English Premier League continues to lead the way in terms of revenue, raking in $3.8 billion for the 2011-12 season, according to sports business group Deloitte.

But the German league bests its rivals with combined profits of $242 million, compared to $154 million for the Premier League.

The profit of clubs in the Bundesliga remained the same despite a drop in overall revenue to $2.36 billion for 2011-12 season, compared to $2.56 billion a year earlier.

Runners-up in 2012, Bayern Munich were crowned kings of Europe in May after beating Borussia Dortmund in the first all-German Champions League final.

"The reason the Bundesliga is more profitable than the Premier League really comes down to the regulations that German football authorities have in place," Paul Rawnsley, a director at Deloitte, told CNN.

"They have a much stronger central control over the ownership and financial models of clubs."

Rawnsley says there are two main aspects to rulings which enable German clubs to maximize their profits.

"Firstly, the regulations constrain the club's costs, and hence wage costs, as the clubs are limited in terms of how much they can spend in terms of wages-to-revenue ratio.

"Secondly, the regulations on club ownerships and the restrictions on external owners mean German clubs do not have the levels of extra contributions that we have seen in England.

"Over the last 5-6 years in England, there has been an extra $3 billion of money injected into clubs, which can be used to fund a higher level of wage costs."

So without the influence of incredibly wealthy figures such as Sheikh Mansour (Manchester City) and Roman Abramovich (Chelsea), Bundesliga clubs spend 51% of their total revenue on wages.

This is significantly lower than the 70% figure splashed out by English sides.

The Premier League's continued growth is also tempered by debt. The combined debt of the 20 teams in England's top flight is $3.8 billion, a figure that is identical to the league's total revenue.

However, Rawnsley believes the servicing of clubs' debts is not the issue it once was.

"A few years ago, debt was much more of a story but this year it has nudged downwards again," he explained. "Debt levels are going down and the costs of servicing the debt are going down as well.

"In round numbers, the cost to Premier League clubs servicing their debts is $125 million."

The reason for the relatively meager figure on debts of $3.8 billion is because $2.2 billion of that total has been provided by the financial backers of various clubs in the form of non-interest bearing "soft loans."

With new financial regulations from UEFA coming into play next season as well as an increased television deal that brings an extra $925 million to the Premier League, English clubs have the opportunity to increase profits next season.

While that may please their accountants, fans will -- as ever -- be far more concerned about boosting the footballing fortunes of their favorites in the year to come.