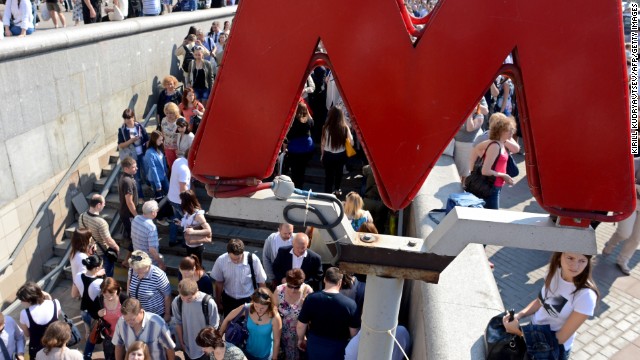 Commuters wait for the reopening of the Komsomolskaya metro station in Moscow. Thousands were evacuated after a fire.
STORY HIGHLIGHTS

Eleven of them were hospitalized, it said. Psychologists were sent to the scene to help those in need.

The underground alert near the Kremlin prompted the evacuation of about 4,500 commuters, the ministry said.

The blaze started when a power cable caught fire in a tunnel near Okhotny Ryad, on the metro's oldest Sokolnicheskaya line, the ministry said. It has been extinguished.

Moscow State University student Petr Sergeiivich, 18, was among passengers evacuated from the metro.

He smelled smoke while riding on a train, which was busy with all the seats taken. When it reached Okhotny Ryad station, police told the passengers to evacuate.

"We see a huge smoke in the metro, but there is no panic in the crowd," he said. "Everyone waited underground quite patiently."

The passengers followed instructions and were back above ground within a few minutes, he said.

Metro services on the Sokolnicheskaya line are now back to normal, the emergencies ministry said.