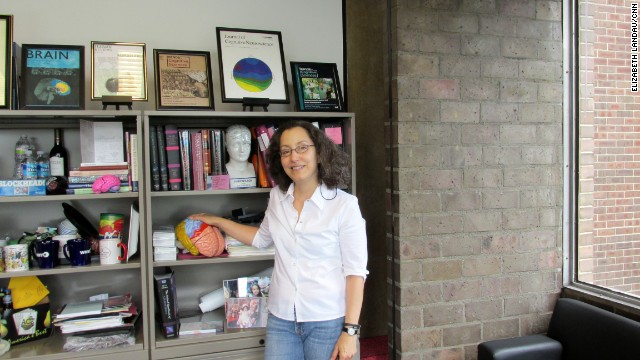 Martha Farah studies the connection between socioeconomic status and the brain at the University of Pennsylvania.
STORY HIGHLIGHTS

Philadelphia (CNN) -- Martha Farah is leaning forward, furiously typing on her thin laptop in her spacious office at the University of Pennsylvania. Awards, paintings and posters lean against the walls on the floor as she puts the final touches on a grant proposal.

"I hate it, but I love it!" she exclaims, in a voice that often rises melodically to stress words with enthusiasm. "The adrenaline!"

Farah, 57, built a career that has taken many exciting turns. The scope of her work in the field is impressive: She has studied vision, brain-enhancing drugs and socioeconomic influences on the brain, among other topics. Currently, she is the founding director for Penn's Center for Neuroscience and Society.

"One of the things that really drew me to her was her interest in applying the tools and insights of cognitive neuroscience to socially relevant questions," said Andrea Heberlein, a former postdoctoral fellow in Farah's lab and current lecturer at Boston College. "How can we make the world better, using these tools?"

A revolution in the works

After completing her undergraduate education at Massachusetts Institute of Technology, Farah studied experimental psychology in the 1970s and '80s at Harvard University, where she earned her Ph.D.

The prevailing idea among scientists at the time was that the mind is like computer software and the brain is like the hardware; software would explain "cognitive" phenomena such as memory, problem-solving and information processing.

It wasn't clear in these early days whether the field of cognitive neuroscience -- which looks for the basis for those functions in the brain itself -- was going to be very fruitful or productive, Farah said.

"As a result, I feel like I had a ringside seat for, really, a scientific revolution," Farah said.

Farah herself wrote a landmark book, published in 1990, called "Visual Agnosia," which laid out a comprehensive analysis of how cognitive neuroscience can study visual recognition disorders.

One patient in her work on vision and memory made a big impression on her. Farah visited him in western Ontario. He had suffered a motorcycle accident, resulting in brain damage that left him unable to recognize faces he had encountered after his brain injury but still remembered the faces that were familiar to him from before the accident -- an extremely rare phenomenon.

The face of his own wife, whom he had met after his accident, failed to stick in his mind. He could never recognize her either, Farah said.

Farah tested his impairment by showing him images of a single person who had undergone a dramatic shift in appearance after the man's accident: Michael Jackson.

Sure enough, the man had no idea who Jackson was in a photo after Jackson's transformation, but he easily recognized the singer from an earlier photo. This is distinct from prosopagnosia or "face blindness," a condition which neurologist Oliver Sacks has that results in a lack of recognition of all faces.

With regard to the man in the motorcycle accident, it's unclear exactly where in his brain was the lesion resulting in his unusual condition, Farah said.

Cognitive neuroscientist Martha Farah is passionate about studying the societal implications of how our brains work.

Here are some other personal details about her:

-- She enjoys cooking and yoga

-- She is a self-described "insanely snobby coffee connoisseur"

Socioeconomics and the brain

For much of her career, Farah continued studying vision and memory. That subject is far more controlled and better understood than what she's doing now, which involves looking at the brain's response to circumstances of social class.

She got interested in questions of the brain and social class when she started hiring baby sitters for her daughter, now 17. Among the women she hired to take care of her daughter were single mothers on welfare who were making extra money by baby-sitting. In the scientific literature, they would be called "low SES" -- in other words, low socioeconomic status.

Farah watched over time how the lives of the baby sitters and their children were different from her own.

"I actually became pretty obsessed with social class, this major dimension of variation in the human race and certainly in American society," Farah said.

As sociological studies have corroborated, it seemed to Farah that child-rearing and children's early experience was very different depending on social class.

Poor children don't get as much exposure to language as their wealthier counterparts, research has found, and they tend to get more negative feedback. What they do hear is not as grammatically complex, with a narrower range of vocabulary. There is less understanding of how children develop and what they need for cognitive development, Farah said.

Stress is another huge factor in these disparities.

Parents of low socioeconomic status have uncertainty about having basic needs met, dangerous neighborhoods, crowding and other factors, causing stress for children and their parents. Stressed parents are less patient and affectionate, further stressing their children, according to Farah.

Farah wanted to investigate the huge differences she saw.

Farah and colleagues have conducted research suggesting that high-stress childhoods, which include less warm parenting, are correlated with changes in stress physiology and stress regulation.

One study, published in March in the journal PLOS One, involved African American adolescents who came from households of low socioeconomic status. At age 4, their parents' responsivity (warmth and supportiveness) was evaluated. Then, 11 to 14 years later, the same participants took a stress test: Giving a talk in front of an unfriendly audience.

"You might say, 'Well, of course life is more stressful in lower socioeconomic strata,' " she said. "But the degree of magnitude of the stress that they live with is just unbelievable."

Such research points to the idea that stress leads to a stunting of brain development in children of low socioeconomic backgrounds. It is unknown whether that stunting can be reversed, but you shouldn't assume that it's unchangeable, Farah said.

In animal models, researchers have found that later enriching experiences can at least partially compensate for the effects of early life stress on the hippocampus -- a seahorse-shaped structure in the brain vital for memory and stress reactivity -- and other brain areas. It's not that the initial effects of the stress are reversed, though; it appears that different pathways are enabled to compensate.

"If you're interested in child policy and stuff, the important bottom line is: You never want to say, 'Oh, damaged goods, so there's nothing we can do now,' " she said.

Farah is quick to add that middle-class parents aren't perfect either. Eagerly watching children for every small advance in development, and showering children with praise, isn't necessarily helpful either.

"But I am also willing to make a value judgment: Smacking young children, saying a lot of negative things to them, not talking to them very much, is bad." She hits the table. "Let's just say it."

A study in progress 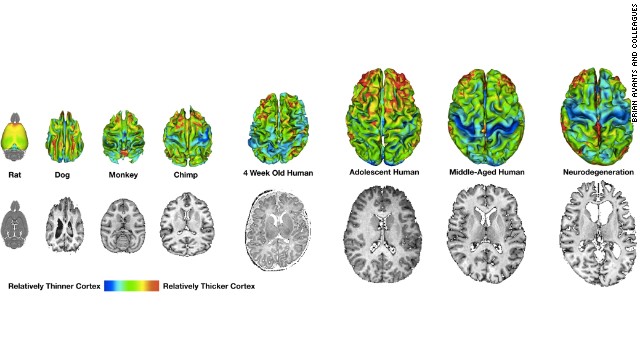 This image, compiled using data from multiple researchers, shows how cortical thickness varies across species. In humans, on the right, there are noticeable changes as a person ages.

Across the Penn campus in the radiology department, Farah sits in a low chair while Brian Avants, assistant professor of radiology, explains their recent study, using a slide on a computer screen. Farah presented the study at the Society for Neuroscience meeting in November.

Researchers followed 53 children who came from low socioeconomic status from birth through adolescence. This is a relatively small number of participants, but it is typical for brain imaging studies.

Participants were evaluated on two scales: Environmental stimulation -- such as "child has toys that teach color" at age 4, and "child has access to at least 10 appropriate books" at age 8 -- and parental nurturing, such as "parent holds child close 10-15 minutes per day" at age 4, and "parents set limits for child and generally enforce them" at age 8.

From this study, Farah and colleagues suggested that environmental stimulation at age 4 predicts cortical thickness in the late teenage years, but parental nurturing did not appear to be linked.

The study hasn't been published yet. Their next step: Understanding how brain differences emerge, starting with infants.

If they do find brain differences in babies associated with socioeconomic status, this could be attributable to a number of factors, including stress, nutritional factors, health care, environmental toxins and second-hand smoke.

A better future, a better brain

As enthusiastic as Farah and colleagues are about the work they are doing, obtaining funding is always a challenge -- hence, the grant proposal she was working on last week. When she first started this work around 2000, she was met with skepticism about looking at poverty's effects on the brain, she said, as if her research would equate poverty with brain disease or worse.

In a tongue-in-cheek way, Avants said he and Farah have discussed defining a "disease" with all the symptoms of poverty and its effects on development. "Then it might be very easy to get funding," he said.

There are far fewer children with autism than there are poor children in the United States, for example, but autism as a condition gets more attention from the science community than the neurological implications of poverty, he said.

"One of the most important things Martha is doing is pushing this, maintaining awareness on the long-term effects of poverty on outcomes," he said.

In the meantime, the research is still developing. There some puzzling results that don't yet make sense, Farah said, and it's hard to say at this point precisely what aspects of social class cause brain differences.

There is no large consortium of scientists working on problems of the brain and social class, either. On a broader scale, there are relatively few studies done about the brain and cognition using participants from low socioeconomic backgrounds.

"Most cognitive neuroscience is done with college sophomores in universities that are wealthy enough to have an imaging center," Farah said. "We are looking at a tiny slice of humanity."