How to kickstart your holiday using apps not maps

Editor's note: Ayesha Durgahee is CNN's roving Business Traveller correspondent. This month, we set her the challenge of traveling from London to Rome using only apps. Here, she recounts the journey, which was far from as easy as expected. Have you got any app tips or business travel stories? Let us know in the comments section below or tweet Ayesha (@AyeshaDurgahee)

(CNN) -- Apps have changed the way we travel. From helping us pack to checking-in, and from coping with jetlag to booking a hotel once we've landed -- these handy tools can be used every step of the way.

With relaxing visions of mobile convenience in mind, I thought traveling from London to Rome using only apps would be stress-free and easy, but it didn't quite work out that way.

My challenge is to get to #Rome only using APPs. Any suggestions for good #hotel APPs - still need to book somewhere to stay! #travel #tech

See also: The future of flight is shape-shifting engines

I began my journey by using the private car service, Uber, to take me to Paddington Station where I was to catch the Heathrow Express.

Uber is free to download and all you need to do is pre-register your credit card details. It will then tell you how far away the closest car is to you, along with a photo of the driver.

Next up was the Heathrow Express app. This turned out to be the easiest facility I used. Again with pre-registered credit card details it only took a couple of minutes to book my ticket.

The QR code turned my phone into my ticket which saved me scrambling at the ticket machine on the platform.

Feeling quite pleased with the journey so far, my bubble was truly burst when I attempted to check-in with the BA app. 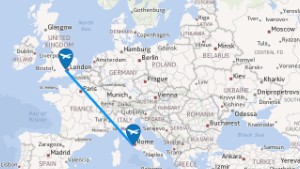 This was the first time I used it as I usually check-in online the night before. To continue in the spirit of booking on the move, I tried to check-in whilst on the Heathrow Express, which was unsuccessful due to patchy signal going underground.

Once at Heathrow's Terminal 5, the app still didn't work. Every time I tried to check-in, I had to fill out my additional passenger information which took a lot of time tapping in the same information.

After eight attempts, I tried the self-check-in kiosk which said I had already checked in!

The problem was it didn't give me an option to print my boarding pass. Great, I thought -- I haven't even made it onto the plane and I've failed.

Then, just as my passport was going to be swiped at a check-in desk, the screen on my phone started refreshing and then suddenly -- my boarding pass appeared. The app challenge continues!

Coming out of arrivals at Rome FCO, I didn't even have to look at my phone as I recognized Fabio, my Uber driver from the photo provided. No name boards, no phone calls -- I just waved and said "You must be Fabio?"

I started looking for a hotel to stay once we reached the Spanish Steps in central Rome -- I had downloaded Hotel Tonight, Priceline and Booking.com to help with the task.

As I perused with patience, looking at the photos and the room features, I suddenly began to get text messages informing me how much I had spent on data roaming. $5...$10...$30...$50 "Ahhh it keeps going up and up and I haven't found anything yet!"

I had failed to book a room at not one but two hotels. The rooms had gone after I tried to process my payment and there was no-one to complain to.

I successfully booked the third hotel I tried -- and just when I thought it was too good to be true. It was!

The hotel had oversold the rooms and they had moved me to their sister hotel up the road which they said was better. Unfortunately it wasn't and in the less desirable area of Termini station.

By the time I had checked in it was too late to go hunting for food and try out some restaurant apps suggestions via Twitter.

I wish there had also been more time to try out some of the city guide apps as well as the Rome MVR app -- which allows you to see monuments like the Coliseum in their former glory.

Augmented Reality apps are still in their infancy so I will definitely be keeping an eye on how these develop and try them out.

Overall, my apps experience wasn't quite what I expected it to be. Some were simple to use whilst others were more time-consuming and fiddly.

To avoid disappoint and expensive data roaming charges -- in the end I had spent $160 -- I would use apps that are quick and easy. That way you'll have more chance of staying travel appy!