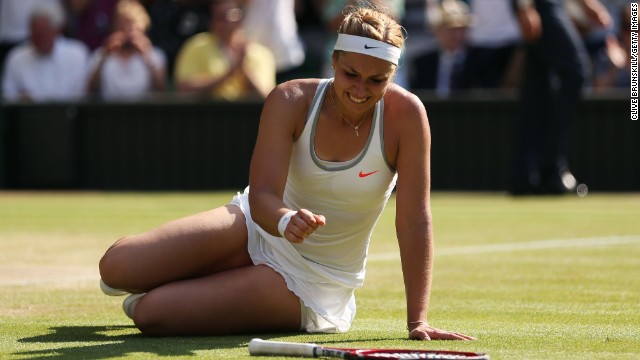 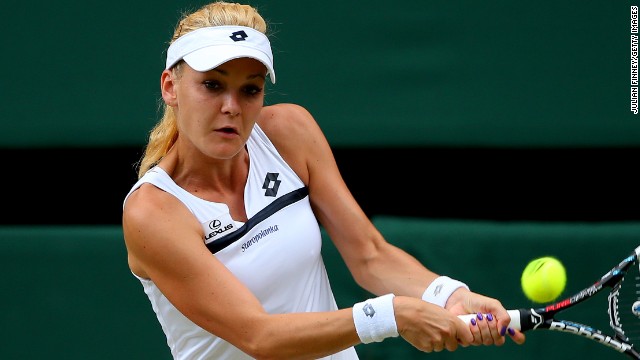 Radwanska had chances to press home her advantage but slipped to a three set defeat in the semifinal. 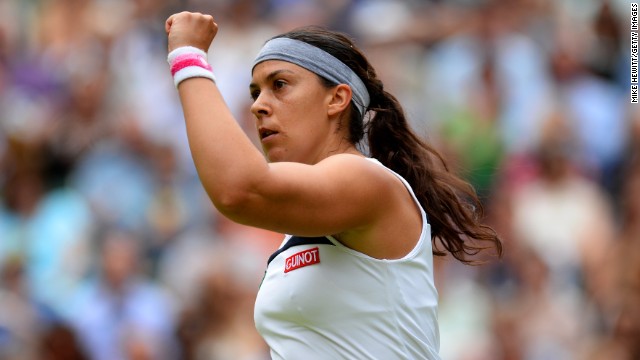 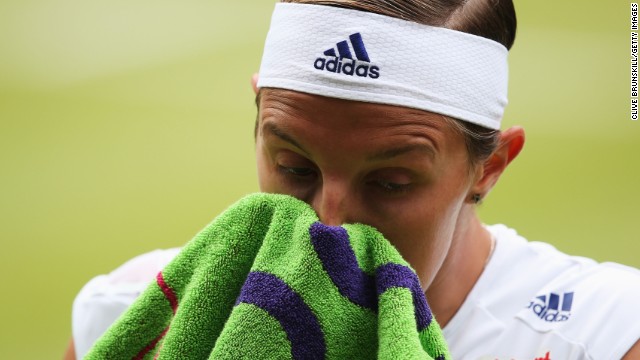 (CNN) -- Sabine Lisicki survived another emotional roller coaster to claim her place in the women's singles final at Wimbledon with a thrilling three-set victory over fourth seed Agnieszka Radwanska Thursday.

The 23rd seed from Germany will play Marion Bartoli of France Saturday, the winners progressing to the title match by vastly contrasting routes.

15th seed Bartoli took little over an hour to end the dream run of Belgian Kirsten Flipkens 6-1 6-2 in the first semifinal.

Lisicki, who caused the upset of all upsets when she dispatched defending champion Serena Williams on Monday, was again taken the full distance by Radwanska before winning 4-6 2-6 9-7 in two hours 18 minutes of compelling action on Centre Court.

Like in her match against No.1 seed Williams, Lisicki trailed by a break in the decider and looked to be heading for the exit door until summoning up a stirring comeback.

"In the third set I was down 3-0 and I thought 'I did it against Serena, I can do it again," she told BBC Sport.

"It was unbelievable, I think the last few games were so exciting. It was a battle and I'm just so happy to have won it," she added.

Radwanska, beaten by Williams in last year's final, appeared to have taken a stranglehold on the match when she recovered from an early break down in the second set to win eight of the next nine games.

But the 23-year-old Lisicki, who has become an instant crowd favorite at SW19, battled back to serve for the match at 5-4, only to be broken again.

Radwanska kept on the pressure to force Lisicki to hold her own service twice to stay in the championship but in the 15th game fell behind again.

Serving for a place in the final for the second time, Lisicki held her nerve and took it on her second match point before falling to the turf in trademark celebration.

Bartoli, who revealed after her victory that she had taken a half hour nap shortly before coming out for one of the most important matches of her career, emerged from her slumbers to dismiss 20th seed Flipkens.

Read: Flipkens fights back from the brink

Looking to follow in the footsteps of famous compatriots such as Kim Clijsters and Justine Henin, Flipkens looked nervous and tentative from the start and could not repeat the form which had seen her knock out 2011 Wimbledon champion Petra Kvitova.

"I was asleep from 12 until 1230, you can ask the physio," Bartoli said. "And I was still razor-sharp right from the start."

She put out Henin in the 2007 semifinals before going on to lose in straight sets to Venus Williams and will be looking to go one better against Lisicki, who is appearing in her first grand slam final.

Lisicki will bid to become the first German to win a major since Steffi Graf in the 1999 French Open.

She revealed that Graf had sent her a good luck text ahead of her semifinal against Radwanska.

In other Wimbledon action Thursday, top seeds Bob Bryan and Mike Bryan of the United States beat Rohan Bopanna (India) and Edouard Roger-Vasselin of France 6-7 6-4 6-3 5-7 6-3 to reach the final of the men's doubles.

The Bryans will play the Croatian-Brazil pair of Ivan Dodig and Marcelo Melo after they beat the Indian and Czech combination of Leander Paes and Radek Stepanek, also in five sets.