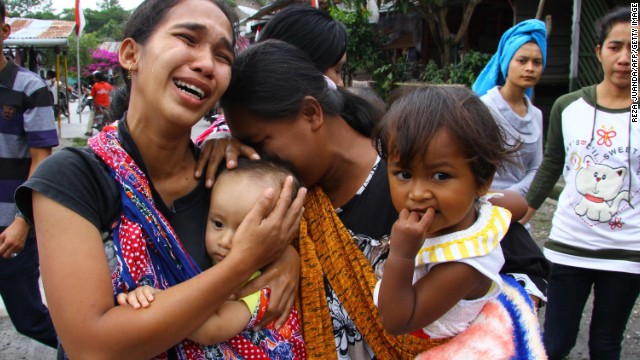 A quake strikes Indonesia Saturday just days after an earthquake in Aceh province. File photo of villagers after the July 2 temblor.
STORY HIGHLIGHTS

(CNN) -- A 6.0-magnitude earthquake hit Indonesia on Saturday, days after a temblor left dozens dead in the nation.

The quake struck off the island of Sumatra, the U.S. Geological Survey said. It had earlier stated it was a 6.4-magnitude quake, but revised the number.

Indonesia is still recovering from a 6.1-magnitude quake that killed 35 people and injured 275 others three days ago, the national disaster agency reported.

In the last earthquake, the death and destruction were mainly in the province of Aceh on the island of Sumatra.

Indonesia is on the Ring of Fire, an arc of fault lines circling the Pacific Basin that is prone to frequent earthquakes and volcanic eruptions.

In 2004, a 9.1-magnitude underwater earthquake off the coast of Sumatra triggered a tsunami that killed more than 200,000 people in 14 countries. The majority of the deaths were in Indonesia, with Aceh bearing the brunt.