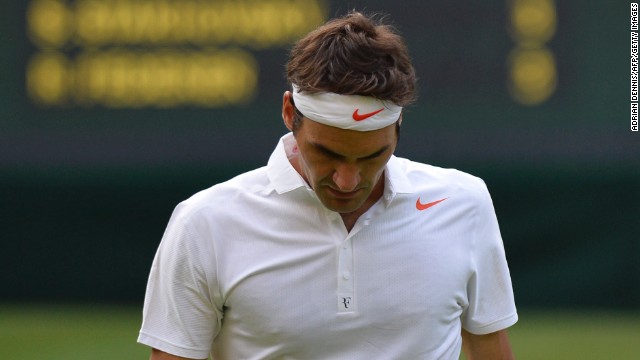 Federer, who owns a men's record 17 grand slam titles, slumped to his lowest world ranking in 10 years when the new standings were released Monday.

The Swiss dropped from third to fifth in the aftermath of his upset loss in the second round to Sergiy Stakhovsky at Wimbledon, matching the ranking he last held in June 2003 when he wasn't yet a grand slam winner.

Federer, a month away from his 32nd birthday, responded to the defeat by entering a pair of smaller clay court tournaments in Europe in a bid to reverse fortunes.

He is sixth in the calendar-year points standings, with the top eight earning a berth at the year-end championships in London.

Federer will play at next week's German Tennis Championships in Hamburg before contesting the Swiss Open in Gstaad the following week.

"I'm really looking forward to playing in front of my home fans in Gstaad this summer," Federer told his website this month. "I have got a lot of great memories of the tournament in the mountains of Switzerland."

Federer last played in Gstaad in 2004, winning the event for the only time. He lost his first four matches there before reaching the final in 2003 a week after his maiden grand slam triumph at Wimbledon.

While Federer frets over his drop in the rankings, man of the moment Murray is very much on the up.

He has spectacularly recovered -- with the help of coach Ivan Lendl -- from losing his first four grand slam finals and in the 2011 semifinals at Wimbledon to Rafael Nadal when he was firmly in control.

He has now captured two of the last three grand slam tournaments he has competed in and replaced Federer as the world's best grass court player, having also claimed Olympic gold at Wimbledon in 2012 and a Wimbledon warm-up in London last month.

"Under pressure right now Andy has two majors and a gold medal," his coach Ivan Lendl told British newspaper the Telegraph as he reflected on Murray's Wimbledon victory over Novak Djokovic on Sunday.

"Novak is a great player, don't get me wrong. He has had a phenomenal last 12 months, basically since the start of 2011, so the rankings look at all of that.

"[But] if somebody has two majors and an Olympic gold medal, and everybody else has only one major . . ." Lendl added, before tailing off. "Everybody can make their own opinion on that."

When the Scot downed world No. 1 Djokovic in straight sets in Sunday's final, it ended a 77-year wait for a British men's singles champion at tennis' most prestigious tournament.

Murray said Monday that he only had one-hour of sleep after his victory -- and that he didn't want to go to sleep at all because he thought when he woke up it would all be a dream.

The Queen was one of those to congratulate Murray and he is being tipped to receive knighthood.

Read: Murray set to cash in

The Scot's last loss on grass was to Federer in the 2012 Wimbledon final.

"I didn't always think it was going to happen," said Murray of his Wimbledon conquest. "I didn't doubt myself so much after last year's final.

"It was the best I'd recovered from a grand slam loss. Maybe a couple of years ago when I lost in the semis to Rafa when I was up a set, maybe a break as well or had break points, and didn't get that, that was a tough, tough one for me."

And Murray said he doesn't expect his motivation to dip after his historic fortnight at Wimbledon.

"I just need to make sure I don't get side-tracked by anything."