The God of golf: Vardon tames the majesty of Muirfield 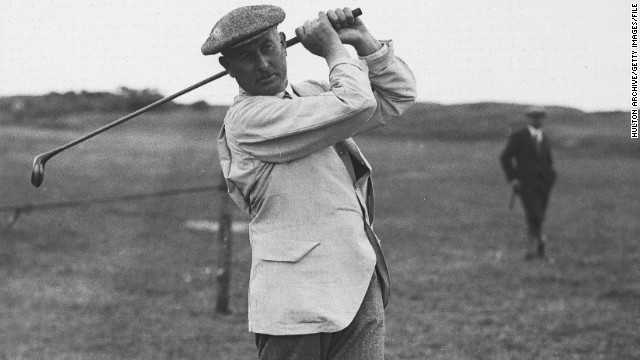 Harry Vardon still holds the record for the most British Open triumphs, securing six between 1896 and 1914. He is also credited with sparking an explosion of interest in the game in the United States after embarking on three playing tours in the early 20th century. 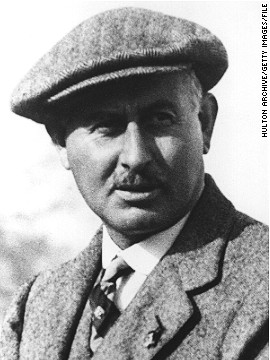 Vardon, referred to as the "God of golf" by another multiple British Open winner, Peter Thompson, also invented the grip that 90 percent of golfers use today. He managed to reach the pinnacle of golf despite his faltering health, spending long spells in sanitariums until 1910 after being diagnosed with tuberculosis in 1903. 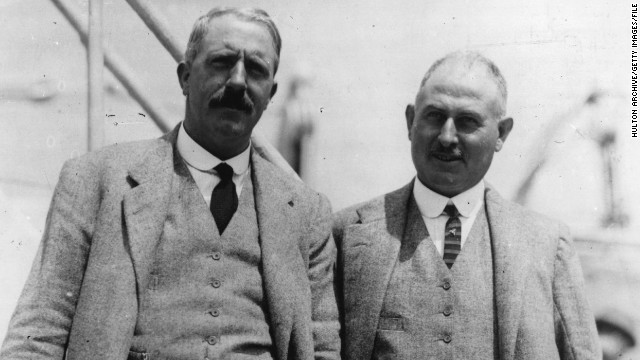 Vardon was born and raised in Jersey, a British outpost off the coast of Northern France, and was friends with Ted Ray (right), seven years his junior, who was also from the island and won two major championships, including the British Open, during his career. 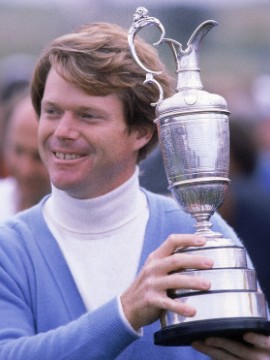 When Tom Watson went into a playoff with Stewart Cink at Turnberry in 2009 he was on the verge of pulling level with Vardon's haul of six titles. But Cink defeated the then 59-year-old Watson, and it appears unlikely the 2014 United States Ryder Cup captain will get another chance. 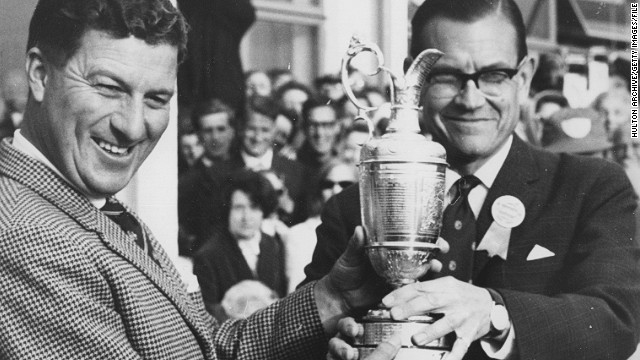 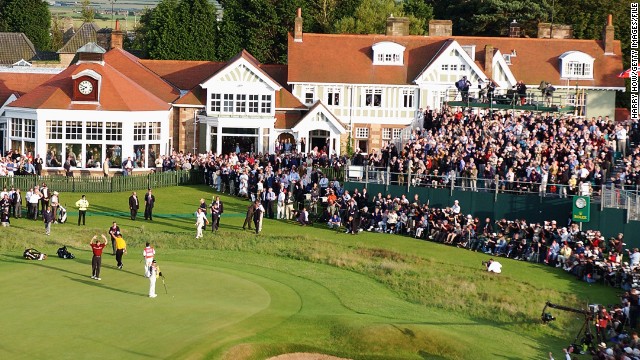 (CNN) -- It was in the majestic surroundings of Muirfield that the original gold-plated superstar of golf secured his first major title.

The small town of Gullane to the east of Edinburgh that is all set to welcome the modern titans of the game for the 142nd staging of the British Open played host to a true pioneer back in 1896.

Harry Vardon won a total of six British Open titles, a record that still stands, but his achievements in the game stretch far beyond his haul of majors, which was lifted to seven by his 1900 U.S. Open triumph.

Not only was he credited with sparking an explosion of interest in the game during his tours of America at the turn of the 20th Century but he also devised the grip- -- "the overlapping grip" or the "Vardon overlap" -- that 90 percent of golfers still deploy.

It is little wonder he is spoken of in such glowing terms by Australian Peter Thompson, who alongside American legend Tom Watson, is just one British Open triumph behind Vardon's half-dozen successes.

Is Rose ready for the British Open?

"He was the God of golf," Thompson told CNN's Living Golf show. "To aspire to such a position was sacrilege -- it was way out of my league.

"It wasn't until I passed five that I thought, 'Well, it's possible to equal the great man' but I didn't do it, regrettably.

Gary Player: Why I love horses

"It must have been inspirational to watch him swing. He had the power of a winning champion. Had someone won seven or even six Opens we wouldn't have had Vardon as a God.

"It is perfect it is in stone and concrete that he should be the man who won six. It hasn't happened before and it isn't likely to happen for many years.

"I don't think anyone will reach six because the competition there is today makes it more difficult. There are at least 25 players that have a chance of winning any major tournament."

Vardon's prowess on the golf course is indisputable.

His entry in the Hall of Fame quotes famed golf writer Bernard Darwin as saying: "I do not think anyone who saw him play in his prime will disagree as to this, that a greater genius is inconceivable."

But his legacy stretches far beyond the beauty of the links courses upon which he flourished, securing his first three championships before the turn of the century.

He became the game's first international superstar when he traveled to the United States in 1900, playing 80 exhibition matches around the country, his tour culminating in that U.S. Open triumph.

Thousands flocked to see him in action, with many scurrying back to their own courses to try and replicate what they had just seen.

"There is absolutely no doubt that that the great boom of golf in America was started by Harry Vardon," said David Crawford, former head greenkeeper at Royal Jersey, where Vardon learnt the game.

"The number of people who flooded to see his exhibition matches, the fact that he was asked back again and again prove that.

"He brought golf into the mainstream for everyone to play and I think that was probably his greatest achievement.

"And of course he'll be forever immortalized because of his most famous grip, there's no getting away from it."

Read: The next King of Scotland

Vardon was born into a working class family in Jersey, a British outpost off the coast of Normandy in France, and honed his game when the island got its first golf course in 1878.

Both Harry and his younger brother started out as caddies and invested hours on practicing their swings, despite their father's disapproval of the game.

Harry's career blossomed when he left Jersey for the English mainland, where his dedication to his craft and insistence on wearing knickerbockers made him stand out from the crowd.

His victory at Muirfield in 1896 announced his prowess to the world and irked the man he beat -- two-time Open champion Willie Park Junior.

"Park was so upset he challenged Vardon to a home and away match for £100," Crawford explained.

"It was a year before they came to play it and Vardon was two shots up after the first tie at North Berwick where around 10,000 people came to watch.

"In the second match Vardon annihilated Park, who went on to become an architect because he knew he wasn't going to win anything with Vardon around.

"Vardon was extremely accurate, a straight driver with an immaculate short game. It has been said his putting stroke wasn't that great but I don't believe you could win all those tournaments with a weak putting stroke.

"He had the complete all round game at the height of his powers."

"There's no doubt that the great boom of golf in America was started by Harry Vardon. He brought golf into the mainstream and I think that was probably his greatest achievement
David Crawford, former head greenkeeper at Royal Jersey Golf Club

Vardon went on to claim three more Open titles before he was struck down by tuberculosis, spending long spells in sanatoriums until 1910.

Yet despite his faltering health, and general lack of fitness, he still came back to win the Open twice more -- in 1911 and 1914.

According to another graduate of the Jersey links, former Ryder Cup star Tommy Horton, Vardon's success is made all the more remarkable given his physical frailties.

"He was never very fit, and when you think about 1914 when he won his last Open, they took him out of hospital two or three weeks before the Championship, because he had tuberculosis," he said.

"Vardon was never a very fit man and he had only a few weeks practice, fresh out of hospital and went out and won the Open Championship. That to me is incredible."

While illness hampered his career in large parts, it may have also helped prolong it.

"It's not very common knowledge, but Harry Vardon was planning to go to promote the equipment he sponsored, or the sponsors promoted for him, in America," Horton added.

"He was going for two or three months as he'd done before -- they liked him in America -- but he fell sick, and because of that he didn't travel on the Titanic."

Vardon's haul of six Open titles is unlikely to be matched any time soon, but had it not been for The Great War, it could have been more.

"He lost six years out of his professional life," Crawford added. "Goodness knows how many Opens Vardon could have won."