A bite-size tour of Comic-Con 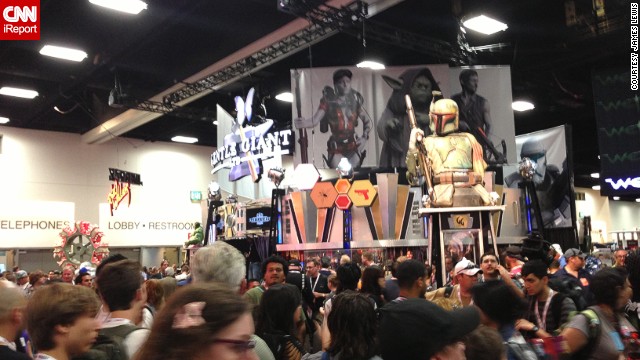 The San Diego convention center is a flurry of activity for five days each July for the annual San Diego Comic-Con, the biggest fan convention of its kind in North America.
STORY HIGHLIGHTS

(CNN) -- The annual San Diego Comic-Con, North America's biggest popular arts convention, is a gathering of fans and celebrities from all over the world.

Micro-video apps like Vine and Instagram were everywhere this year at the convention, and CNN iReporters took on the challenge of doing 15-second interviews with interesting people -- both famous and not-so-famous -- that they ran into during the long weekend.

The results, though not always exactly 15 seconds, were a snapshot of the many varying events and people who populate the Con each year.

From fans celebrating their favorite shows on Syfy, to the ever-growing phenomenon of cosplay, to the stars of the TV series "Impractical Jokers" talking about their favorite practical joke, Jack Black's cape, unusual hats, and yes, Teenage Mutant Ninja Turtle stalking, here's a quick look at how the Con has evolved into a smorgasbord of pop culture.

First, William Shatner confesses his most memorable (if not downright scary) fan moment to a group including Chris Morrow.

Meet just a few of the other celebrities who promote TV series at Comic-Con every year, as Christiane Elin interviewed Aisha Tyler and the "Impractical Jokers." (truTV is a Time Warner network, like CNN.)

Cosplay, short for "costume play," has grown in popularity at Comic-Con, as seen in this video from Tony Perri.

Jack Black spoke to Morrow about his love of the capes that came with the official Comic-Con bags.

Another example of the random encounters at the Con comes from Lisa Hernke and Christiane Elin (who spoke to "Haven" fan Jon Allen from Riverside, California).

TV's No. 1 show, "The Walking Dead," had a big launch at Comic-Con in 2010, and every year the show's elaborate booth outdoes itself. Perri and James Lewis checked it out.

The chance to play the Playstation 4 was one of the big gaming draws this year, as Morrow found out.

Stars of "Defiance" and "Impractical Jokers" talk at Comic-Con, in videos from Elin and Cherry Davis.

"The Incredible Hulk" himself, Lou Ferrigno, who has portrayed the character in live action and animation, is an annual presence at the Con. Perri spoke to him.

Where do cosplayers get their inspiration? Joyce Chow asked this man playing Wolverine.

Lewis attended the "Game of Thrones" panel when Emmy nominee Emilia Clarke spoke about her character.

Elin came across Los Angeles resident Nikki Renieris wearing a pineapple hat (unusual hats are prevalent at the Con) at an event for the TV series "Psych," and also interviewed cast members from "Lost Girl."

Comic-Con spokesman David Glanzer discussed the past and future of the convention with Morrow.

Perri shot video of the ferry ride to the Con from his home of Coronado, California.

Andrew Garfield was in costume as Spider-Man for his panel on "Amazing Spider-Man 2."

Women are driving the social media conversation at Comic-Con, according to a recent study, and have embraced cosplay more each year, as Morrow found in this series of short interviews.

You can't have Comic-Con without preview night, a parade of toys and other merchandise on the convention floor.

Here's writer Jane Espenson ("Buffy the Vampire Slayer," "Battlestar Galactica," "Once Upon a Time") and a representative for the Girl Scouts at a panel on bullying the last day of Comic-Con for the year.

The annual San Diego Comic-Con is a gathering of fans and celebrities from all over the world. Go inside with our story.
Photos: Sights from 2013 Comic-Con
updated 8:33 PM EDT, Sun July 21, 2013

Click through our gallery to see the best costumes and sights from around Comic-Con.
Geeks take on bullying
updated 9:14 PM EDT, Tue July 23, 2013

"Raise your hand if you still remember a specific incidence of being taunted," Carrie Goldman told a crowd at Comic-Con this year.
'Doctor Who' celebrates 50 years with biopic and new Doctor
updated 7:47 PM EDT, Wed July 24, 2013

BBC science-fiction series "Doctor Who" originally premiered in 1963, enticing viewers with its depiction of a time traveler known as the Doctor who explores the universe in a spaceship called the TARDIS. The series has since aired 33 seasons and nearly 800 episodes with 11 actors portraying the Doctor over time.
Batman, Superman to unite on big screen
updated 11:43 AM EDT, Sun July 21, 2013

This summer's Superman blockbuster is getting a sequel -- and it's going to unite the Man of Steel with the Caped Crusader for the first time on the big screen.
Sequel: 'Captain America' confronts modern world
updated 5:10 PM EDT, Mon July 22, 2013

Prepare yourself for the Age of Ultron. Titles and details for Marvel's next movies were revealed at Comic-Con.
Photos: Celebrity appearances at Comic-Con 2013
updated 9:32 PM EDT, Sun July 21, 2013

No matter your fandom, celebrities from every show and movie imaginable were walking around the con. Check out our gallery to see who was on hand.
'Kick-Ass 2': Not your average sequel
updated 11:44 AM EDT, Sun July 21, 2013

British actors David Bradley and Mark Gatiss arrived at the party of film "The World's End" together to discuss their upcoming BBC film "An Adventure In Space and Time."
Harrison Ford on 'Ender's Game' controversy
updated 11:46 AM EDT, Sun July 21, 2013

For actor Harrison Ford, statements against same-sex marriage by the science-fiction author "are not an issue for me."
'Big Bang' writers tease details on Sheldon, Amy romance
updated 4:13 PM EDT, Thu July 25, 2013

Fans of "The Big Bang Theory" gathered for a panel about the writers' room and they got more than they bargained for when some special guests made surprise appearances.
Kristen Bell: 'Veronica Mars' could be my whole life
updated 7:44 PM EDT, Sat July 20, 2013

The cast of the upcoming film "X-Men: Days of Future Past" made a surprise appearance along with director Bryan Singer.
First 'Divergent' footage revealed at Comic-Con
updated 11:42 AM EDT, Sun July 21, 2013

Lucky fans were treated to the first ever footage from upcoming teen dystopic film "Divergent" at Comic-Con.