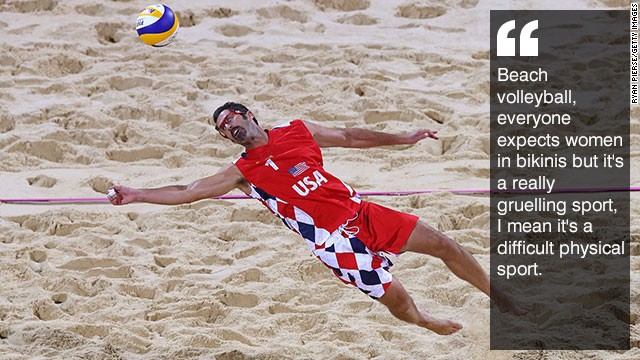 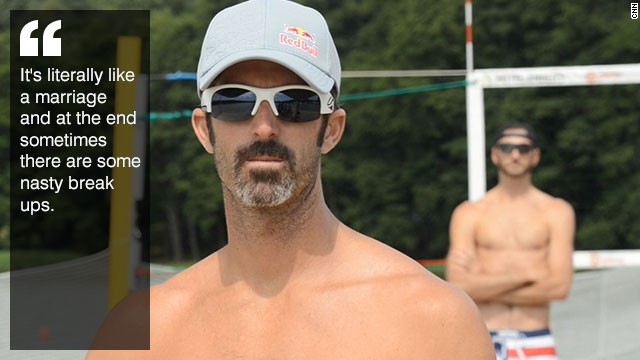 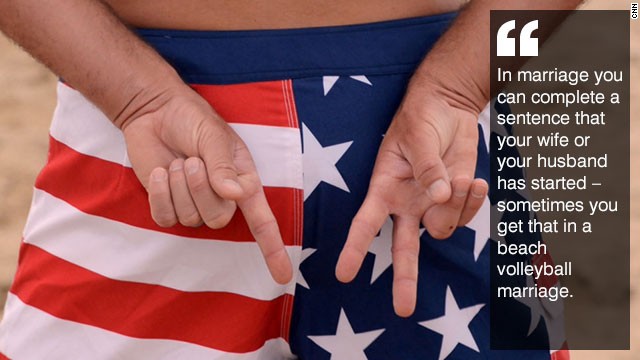 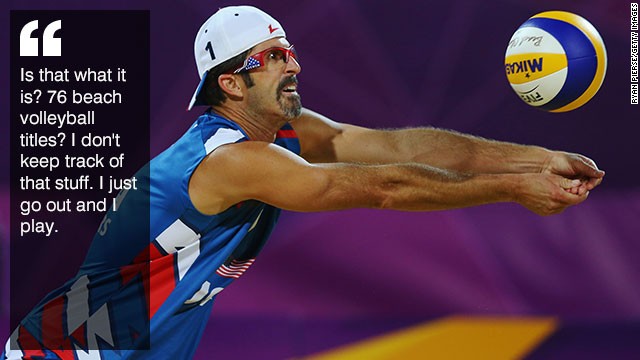 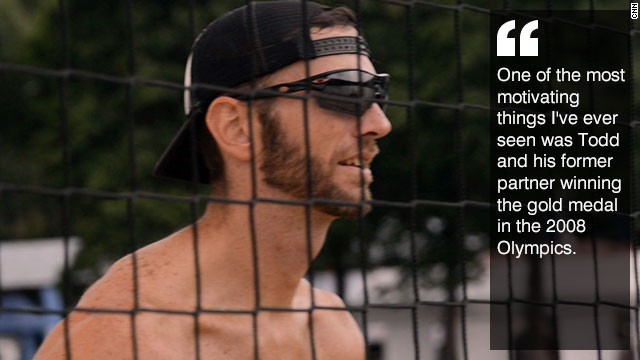 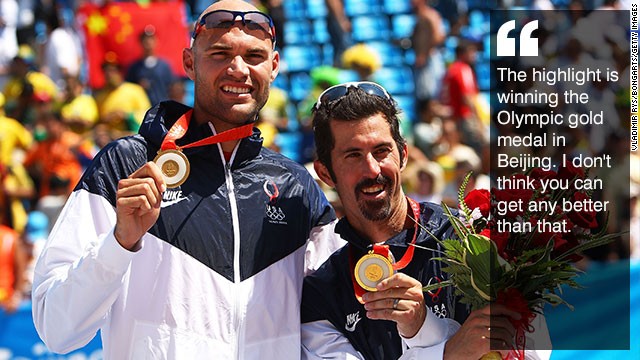 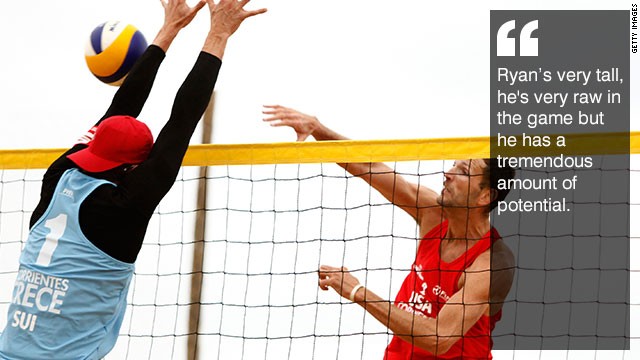 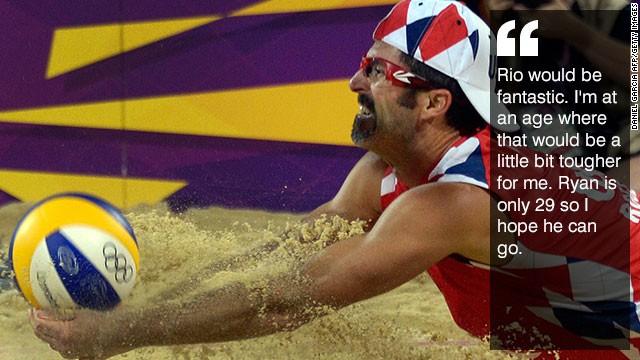 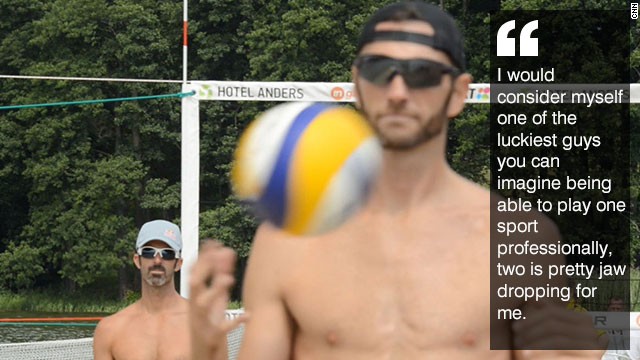 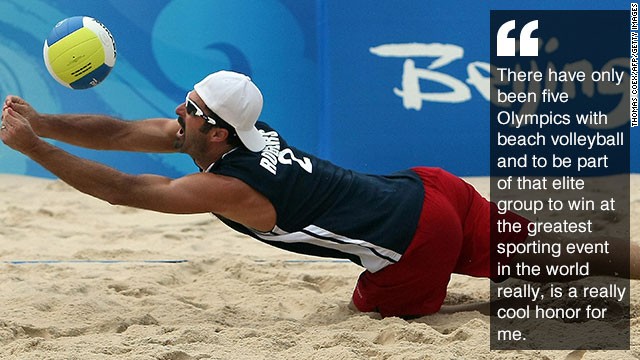 (CNN) -- When a marriage ends up in court it usually means the end -- but for Todd Rogers it was just the beginning.

For an Olympic gold medalist and a former world champion, looking for the perfect partner on the beach volleyball court is what life is all about.

The 39-year-old was a single man following the breakdown of his seven-year partnership with Phil Dalhausser -- a relationship which had catapulted both men to the very top.

Now he's bouncing back after offering his own version of marriage guidance.

"The only way I can equate it to your average fan is that it's actually similar to a marriage," Rogers told CNN's Human to Hero series.

"The top teams literally get together, they call each other 'Hey, would you like to play?' and that's kind of like the first date.

"You ask them on a first date. Then you're meeting and going down to the beach and practicing and every one of those is like a date and a second date and third date.

Read: Squash star who took on the Taliban

"Then you move forward and the season comes along near the summer and every time you go out there you have the stuff that you would literally have in a marriage."

Rogers was a volleyball divorcee when he met current partner Ryan Doherty -- a man 11 years his junior and without any real experience at the top level.

His successful partnership with Dalhausser had come to its natural end but a new adventure was waiting just around the corner in the shape of Doherty.

At seven feet tall, Doherty is not far off the height of the net, which stands at eight feet, giving him a major weapon over his rivals.

For Doherty, volleyball has given him another chance of a sporting career after his original dreams of playing major league baseball ended in failure.

A minor league player for a team affiliated with the Arizona Diamondbacks organization for three years, Doherty had hoped to become a professional only to be released from his contract.

Struggling for work and suffering under the collapse of his baseball career, Doherty traveled to North Carolina to visit a friend, who would go on to introduce him to beach volleyball.

"He was living really close to the beach and we found a beach volleyball court and decided 'Oh, we should try this, we should try to learn' and I just fell in love," he said.

"I played every day and I got beat by high school girls when I was like 25-years-old and it was really embarrassing but still it was a great time and I loved it.

"So after I finished my degree I decided to move out to California and see if I could play this game every day."

It proved an inspired decision as Doherty went from strength to strength before pairing up with Rogers -- a move which he believes has given him another crack at becoming a top sportsmen.

"I would consider myself one of the luckiest guys you can imagine being able to play one sport professionally, two is pretty jaw dropping for me," Doherty added.

The top teams literally get together, they call each other 'Hey, would you like to play?' and that's like the first date
Todd Rogers

"I really lucked out. I don't know what I did in a previous life but I want to thank that guy. Playing professional baseball was my dream. It was my whole life.

"I wanted to do that and when it was over I was really depressed. I was really bummed because I loved that lifestyle.

"Then I was lucky enough to just fall into a lifestyle that's every bit as fun, challenging and motivating as being a professional baseball player."

So when Rogers and Dalhausser parted ways at the end of 2012 following a seven year partnership, Doherty saw his chance.

It was Rogers who got in contact with Doherty after seeing a raw and talented player impress while competing alongside fellow professional Casey Patterson.

Rogers had already faced Patterson and Doherty on two occasions and once his relationship with Dalhausser looked set to end, the experienced Olympian made the call.

"Playing with Todd has been pretty much a dream come true for me," said Doherty.

"I watched every match he's played online well before I was a professional when I first found the sport. One of the most motivating things I've ever seen was Todd and his former partner winning the gold medal in the 2008 Olympics.

"It was amazing to me. I was rooting and cheering and screaming at my TV and I also know that the nickname 'Professor' is very well deserved.

"He has a really good understanding of how things work and why they happen the way they do, so just as a new guy who's trying to learn and trying to get better at the sport, I couldn't have lucked into anything better.

"This has been a really great experience for me so far."

Rogers is also enjoying his new "marriage" and even jokes about Doherty being his "wife."

But while the two like to jest off the court, on it, they remain very much focused with Rogers determined to help his partner become one of the most exciting talents on the circuit.

"Ryan's very tall, he's very raw in the game but he has a tremendous amount of potential," said Rogers.

"But really the number one thing to me is that he's a good guy that I enjoy hanging out with and chatting with.

"You're on the court for 10 to 15 hours a week with someone but you're hanging out with them for 100 hours, maybe even more if you consider sleeping in the same room the whole time. If you're not getting along off the court I think it's real tough."

While the prospect of the pair competing at Rio in 2016 is a slim one, Rogers is not giving up on making it to Brazil just yet.

He remains supremely fit and agile and with Doherty at his side, anything is possible.

"The highlight was winning the Olympic gold medal in Beijing," he said.

"I don't think you can get any better than that although there are some other ones that are high on my list like winning in my home town for the first time in Santa Barbara, California.

"Then there was winning the World Championships in Switzerland in 2007 but the Olympics is once every four years.

"There's only been five Olympics for beach volleyball and to be part of that elite group which can claim a victory at it, the greatest sporting event in the world really, is a really cool honor for me.

"Ryan is only 29 so I definitely would hope that he's be going to Rio, if I'm his partner and it works out that way -- great.

"Right now I tend to think more of a year at a time and if Rio happens for me great, but if nothing else I can watch Ryan playing in Rio and hopefully in 2020 as well."