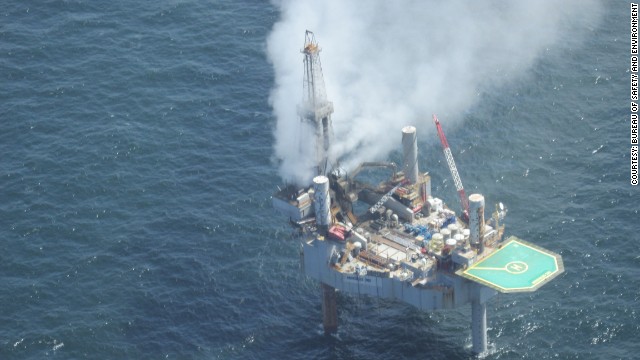 (CNN) -- Two firefighting boats were moved to a safe distance Wednesday as they awaited help in fighting a fire that erupted on a natural gas rig in the Gulf of Mexico, officials say.

"A third vessel equipped with firefighting capability and (an) improved monitoring system" was expected to arrive around midday, the Bureau of Safety and Environmental Enforcement said.

A Coast Guard cutter was on hand to "assess the situation and enforce the security zone," it said, while another was on the way.

Forty-four workers were evacuated from the rig earlier Tuesday after a blowout occurred, officials said. Crew members aboard the Hercules 265, leased by Houston-based Walter Oil & Gas Corp., were preparing the well for production when they hit an unexpected pocket of gas.

Natural gas was leaking at the site, but no oil was being released, the BSEE said after it and the Coast Guard sent flights over the rig Wednesday morning.

"There is no observed sheen on the water surface," the safety bureau said in a news release.

"As the rig fire continues, the beams supporting the derrick and rig floor have folded and have collapsed over the rig structure," which is in about 150 feet of water, it said. "Under BSEE's direction, Walter Oil & Gas has begun preparations to move a jack-up rig on location to potentially drill a relief well."

The platform, about 60 miles southwest of Grand Isle, Louisiana, exploded around 11:45 p.m. Tuesday, the Coast Guard reported. It said a Coast Guard vessel witnessed the blast.

A light sheen about a half-mile wide was initially spotted by environmental inspectors but dissipated "almost immediately," the BSEE said.