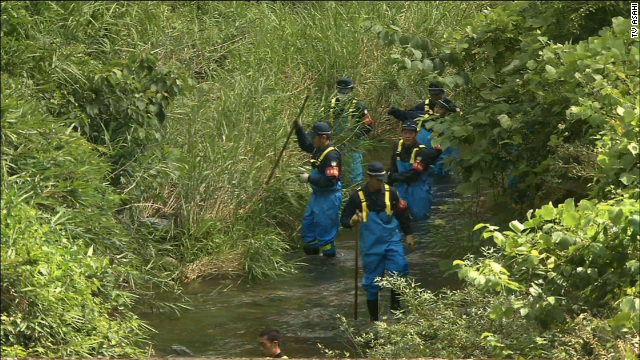 Police search for the 63-year-old man in the countryside around the tiny community of Mitake Wednesday.
STORY HIGHLIGHTS

Tokyo (CNN) -- A 63-year-old man wanted in connection with the murder of five people in a remote Japanese hamlet has been captured after a manhunt involving more than 400 police.

The following morning, two more corpses were found a few hundred meters away in the same neighborhood in the victims' respective homes.

An autopsy revealed that all five victims were killed by injuries to the head, prompting police to set up a task force to investigate a possible serial killer, Harada said.

The wanted man -- who lived next to the burned out houses -- disappeared, prompting a huge manhunt.

Police found the man in the mountains barely 1 km from the village. He was barefoot, wearing only his underwear when he was discovered, police spokesman Kazutaka Umemoto told CNN.

The man was then taken to the nearest police station at Shunan for questioning.

The case attracted significant media attention after a note, apparently written in the form of a "haiku" poem -- a short form of Japanese verse -- was left hanging in the window of the fugitive man's home.

According to the authorities, the poem translated as: "Setting on fire, smoke gives delight, to country fellows." They have refused to draw a link between the poem and the killings.

Mitake is a remote, mountainous community with less than 20 inhabitants. According to local media, the arrested man lived alone, and moved into the neighborhood about 20 years ago to take care of his elderly parents.

Reports suggested the man grew increasingly alienated in the small community after his parents died about 7-8 years ago. One of the victims frequently quarreled with him over his dog, according to Yomiuri Shimbun, Japan's largest newspaper.