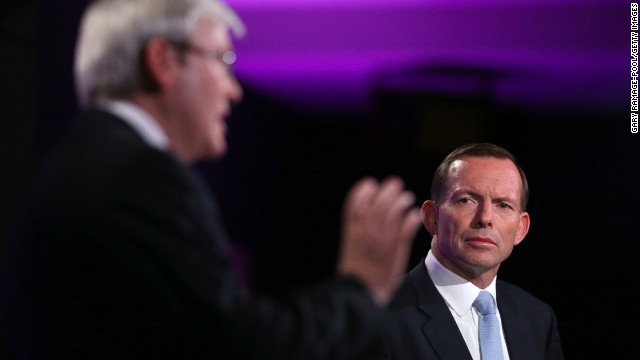 "No one -- however smart, however well-educated, however experienced -- is the suppository of all wisdom," Abbott told a Liberal Party event in the city of Melbourne.

A suppository is "a small piece of medicated substance, usually conical, ovoid, or cylindrical, introduced into a body passage, as the rectum or vagina, where body heat causes it to melt," according to Webster's New World College Dictionary.

Not quite the same as a repository (a place in which things may be placed for safekeeping), the word typically used in the expression "the repository of all wisdom."

Abbott's unwitting switch of the two words both shocked and amused his audience.

"There was an audible gasp in the room, a few people snickering," said Jonathan Swan, a political reporter for Fairfax Media who was at the event.

As news of Abbott's unfortunate utterance filtered out, social media users quickly seized on the gaffe. The hashtag #suppository began trending on Twitter in Australia.

"Oh dear. Abbott - "we are not the 'suppository" of all wisdom.' Not sure where to stick this one," wrote Marcus Priest, a political reporter for the Australian Financial Review.

'I feel sorry for Abbott & his accidental use of the word suppository. Stop going on like he's the enema," quipped Felicity Reynolds, the head of a non-governmental organization in Sydney.

It's not the kind of coverage Abbott's aides will have been hoping for ahead of national elections next month. The night before, he had been engaged in a televised debate with his key opponent, Prime Minister Kevin Rudd of Labor.

As of Monday evening, Abbott hadn't joined in the Twitter flurry his malapropism had caused.

He's not the first Australian politician whose words have caused a stir on social media during this election campaign.

Stephanie Banister, a 27-year-old welder running for a seat in Rankin, Queensland, unleashed a series of blunders during an interview, including referring to Islam as a country.

Her comments went viral and on Saturday, she withdrew from the race, citing threats to her family.