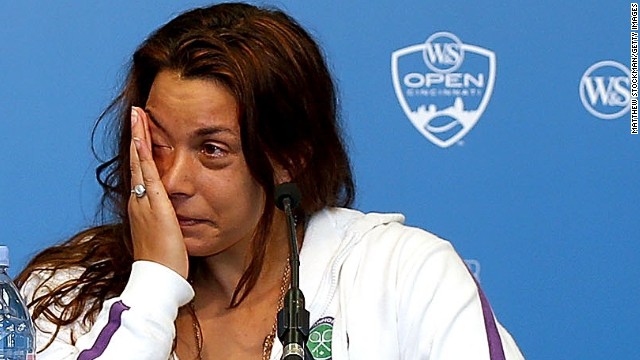 Wimbledon champion Marion Bartoli made a shock decision to quit tennis after losing her opening match at the Cincinnati Open on August 14. 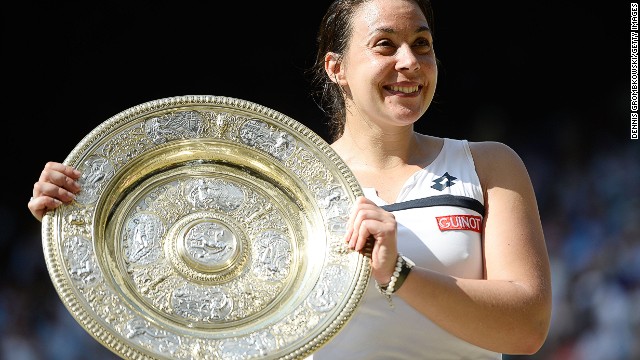 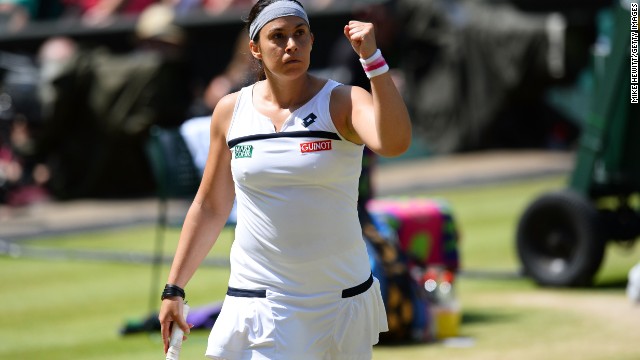 The 28-year-old, who rose to seventh in the world rankings with her breakthrough triumph, told reporters at the U.S. Open warmup tournament that her body could no longer cope with the stress of touring life. 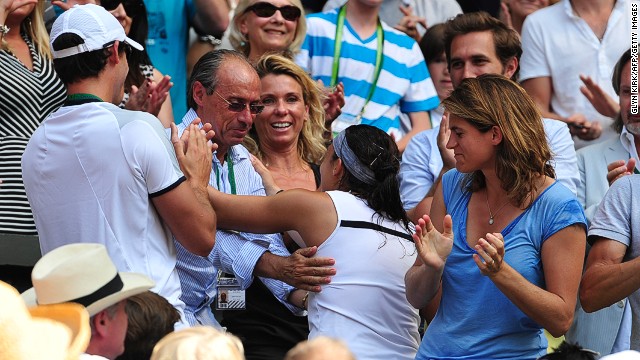 Bartoli celebrated her Wimbledon win with her father Walter, who was her coach for over 20 years before she began working with former world No. 1 Amelie Mauresmo (right). 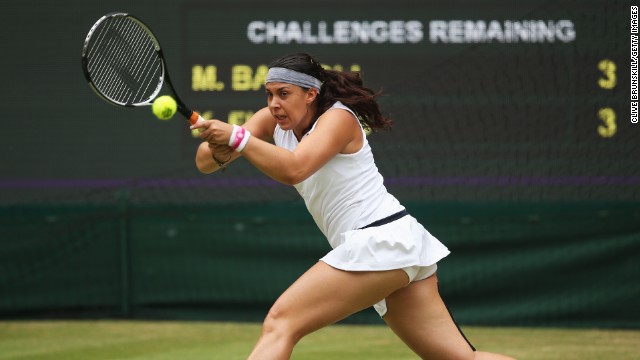 Walter encouraged his daughter to adopt a two-handed playing style as a child after being inspired by the success of Monica Seles. 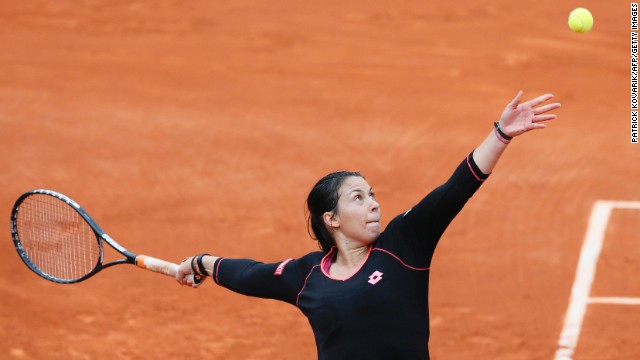 Bartoli, who never had professional coaching, also developed a distinctive serving style. She reached the semifinals on the red clay of Roland Garros at the 2011 French Open. 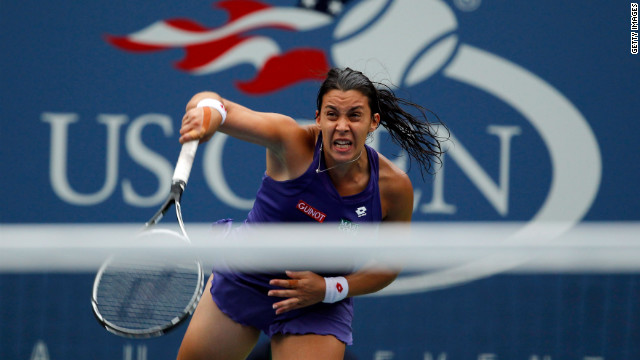 She reached the quarterfinals of the 2012 U.S. Open, and the same stage of the Australian Open in 2009. 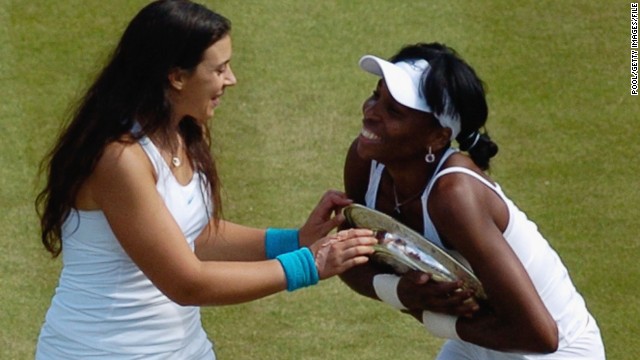 But it was Wimbledon where Bartoli made her name, losing in the 2007 final against Venus Williams (right) on the hallowed grass courts of the All-England Club.
HIDE CAPTION
Ends in tears
Grand slam champion
'Pain everywhere'
Marion's mentors
Twice as nice
Serving up success
Solid performer
Great on grass
<<
<

The Frenchwoman, who beat Germany's Sabine Lisicki to be crowned champion at the All England Club, broke down in tears as she told reporters her body could no longer handle the strain of competing at the top level.

The announcement came following the world No. 7's 3-6 6-4 6-1 defeat to Romania's Simona Halep in the second round of the Western and Southern Open.

"This was actually the last match of my career. Sorry," the 28-year-old said during an emotional press conference in Cincinnati.

"My body just can't do it anymore. I've already been through a lot of injuries since the beginning of the year.

"I've been on the tour for so long, and I really pushed through and left it all during that Wimbledon. I really felt I gave all the energy I have left in my body.

"I made my dream a reality and it will stay with me forever, but now my body just can't cope with everything. I have pain everywhere after 45 minutes or an hour of play. I've been doing this for so long, and body-wise I just can't do it anymore."

Bartoli had not planned on calling time on her career prior to the match, but she knew once the contest had finished that it was time to hang up her racket.

"You never know before the match that it's going to be your last match," she explained, "but I just felt that way after the match.

Marion Bartoli with the Venus Rosewater Dish. The 28-year-old claimed her first Grand Slam singles title with victory over Germany's Sabine Lisicki at Wimbledon on Saturday. 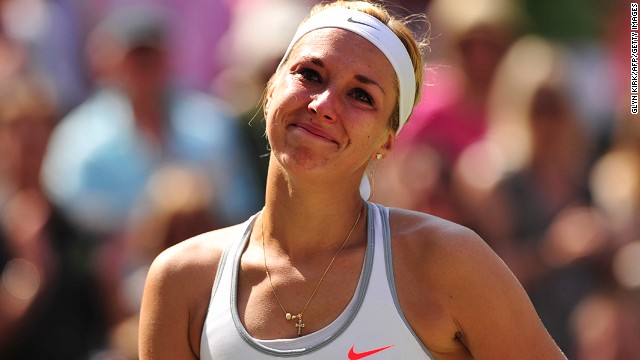 Lisicki didn't play her best tennis in the final, but has become a firm favorite with the Wimbledon crowds in 2013. The 23-year-old stunned Serena Williams in the fourth round and fended off Agnieszka Radwanska in the semis. 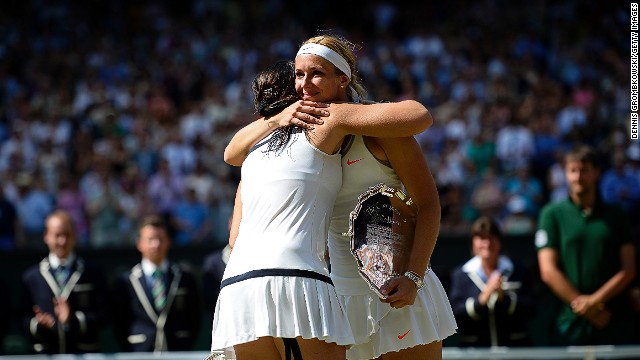 Bartoli and Lisicki share a sporting embrace during the awards ceremony.

Bartoli reached the Wimbledon final in 2007 where she lost out to Venus Williams. 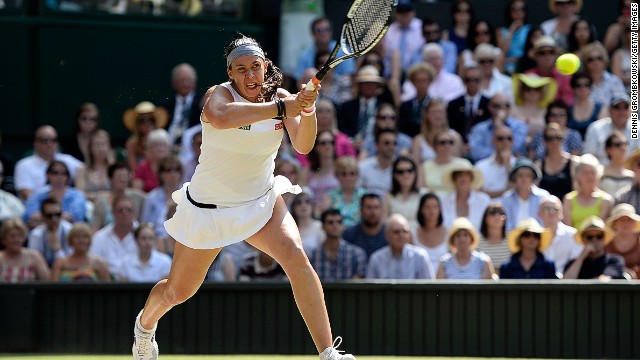 "I felt I just couldn't do this anymore. After one set, my whole body was just in pain.

"It's been a tough decision to make. I didn't make this decision easily. I've been a tennis player for a long time, and I had the chance to make my biggest dream a reality. I felt I really, really pushed through the ultimate limits to make it happen.

"But now I just can't do it anymore."

Bartoli turned pro in 2000 and, after battling for 13 years to win one of tennis' four grand slams, she now feels the time has earned the right to focus on other areas of her life.

"As a tennis player you had to be at 100%," she added. "I'm the kind of person, when I'm doing something, I'm doing it 100%. I have to be on the practice court preparing for the next tournament tomorrow.

"There are so many things to do in life rather than playing tennis, so I'm sure I'll find something. I just need a bit of time to settle down.

Bartoli was taught tennis as a child by her father Walter, a doctor who coached her for most of her playing days until they split earlier this year and she began working with former world No. 1 Amelie Mauresmo.

"I called him, yes. But my dad knows me enough to know it a bit when he saw me leaving home for the States," Bartoli said.

"He kind of felt I was tired and I was exhausted, and he was not surprised by the decision.

"He said, 'I kind of felt it somehow. I can see it in your eyes and see your body and I know all the work you've done to make it happen. I'm so proud of you. I will support you in anything you're doing.' "

Bartoli first came to prominence when she reached the 2007 Wimbledon final, losing to Venus Williams. An unorthodox player with a distinctive serving style, she earned more than $11 million on the court -- $2.87 million of that this year -- with eight WTA Tour titles.

"She is an inspirational champion and a great ambassador for women's tennis that has dedicated her life to the sport and given so much back to the game."

Courtney Nguyen, a tennis writer with SI.com, said the timing of Bartoli's decision has stunned everyone.

"It is quite shocking, even before this tournament she had been making plans to play in exhibitions in Australia in January, she had been talking about still being motivated and wanting to achieve more goals in tennis," Nguyen told CNN.

"I think a lot of people are either second guessing her decision or just saying 'You know what, Marion Bartoli played her tennis career on her own terms, in her own way, this is exactly the way Marion Bartoli would go out.' "

Goran Ivanisevic, who was unable to defend his Wimbledon title in 2002 due to injury, said Bartoli might regret her decision when next year's tournament starts in late June.

"There is nothing like playing at Wimbledon as 'Wimbledon champion.' I couldn't defend." the Croatian told the website of the senior players' Champions Tour.

Guy Forget, who was Bartoli's captain in France's 2004 Fed Cup team, said she may have made a hasty decision.

"Marion is a very smart girl, she is so dedicated about the sport that I'm always very cautious about someone's quote right after a defeat, and that happened right after she lost," the former world No. 4 told the Champions Tour website.

"I hope she is going to change her mind. You don't want to have regrets looking back. Being a professional player is such an exceptional job and you don't want to look back in a few months or years later and think, 'Why did I stop?'

"Go to the beach for a few days, go running in the park, just get your head together, spend some time with your friends. And, if you don't want to play the next week, just don't play it -- if you want to miss the U.S. Open, fine.

"But just don't quit, don't take such a radical decision only a few weeks after winning the biggest tournament in the world."