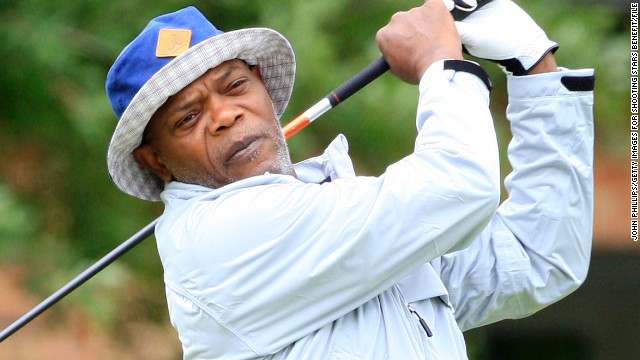 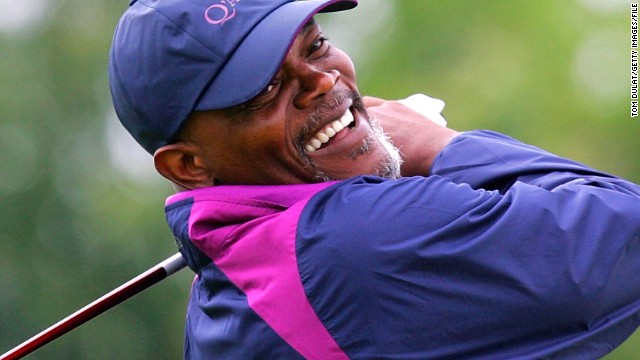 The Pulp Fiction actor is one of the most prolific golfers on the celebrity circuit, and has it written into his movie contracts that he can play twice a week. 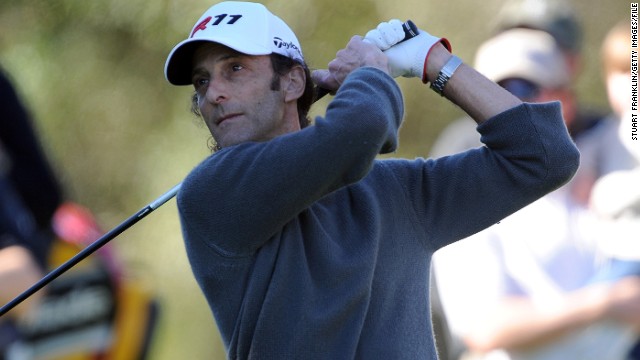 Jackson rates musician Kenny G -- seen here are the AT&T Pebble Beach National Pro-Am in 2011 -- as the best amateur golfer he has played against. 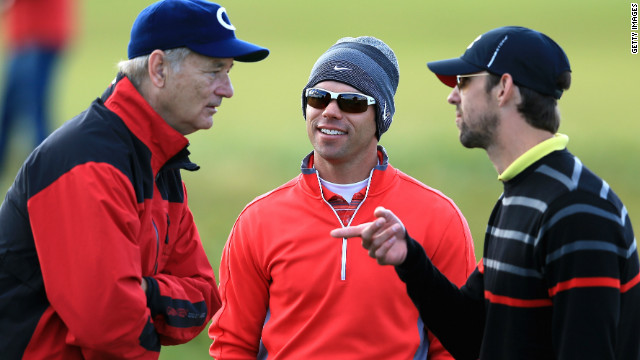 Bill Murray, left, talks with swimming legend Michael Phelps (right). The veteran actor made one of the most famous golf comedy films with 1980's Caddyshack. 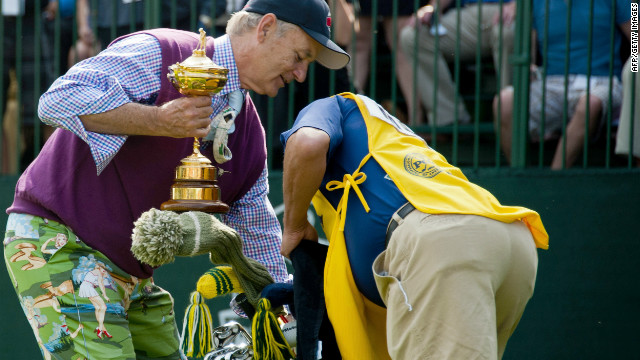 Murray, like Jackson, is a longtime regular on the celebrity golf circuit. Here he pretends to steal the Ryder Cup at the Captains & Celebrity Scramble at Medinah in 2012. 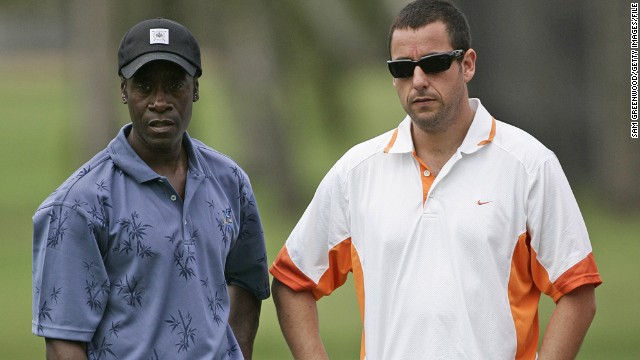 Adam Sandler (right, with fellow actor Don Cheadle at a PGA Tour pro-am event) will always be remembered in golfing circles for the 1996 film Happy Gilmore. He played a failed ice hockey player who changes careers -- with maverick moves copied by real-life hackers around the globe. 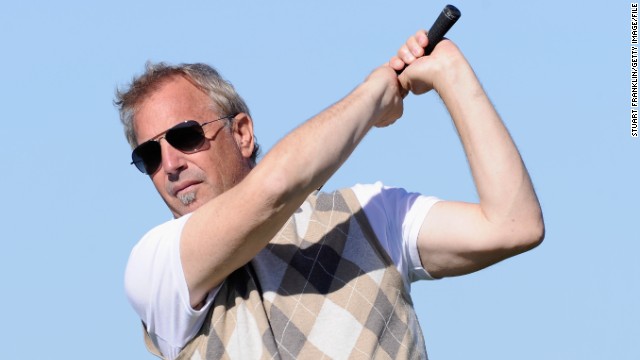 1996 was a big year for golf movies, with Kevin Costner -- here playing at the 2011 AT&T Pebble Beach National Pro-Am -- starring in the hit Tin Cup alongside Rene Russo. 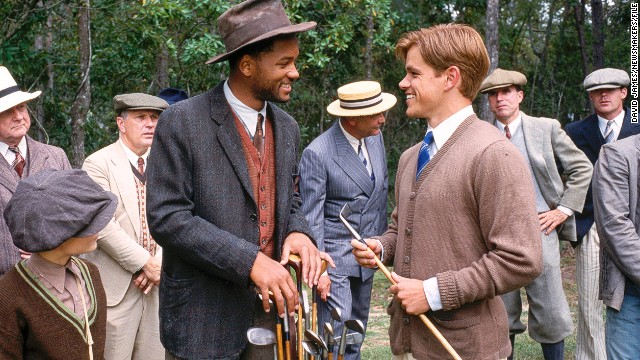 The Legend of Bagger Vance, released in 2000, starred Will Smith (left) in the title role as caddy to Matt Damon's character (right). 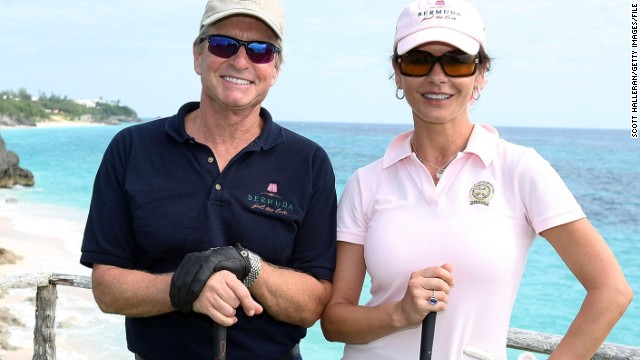 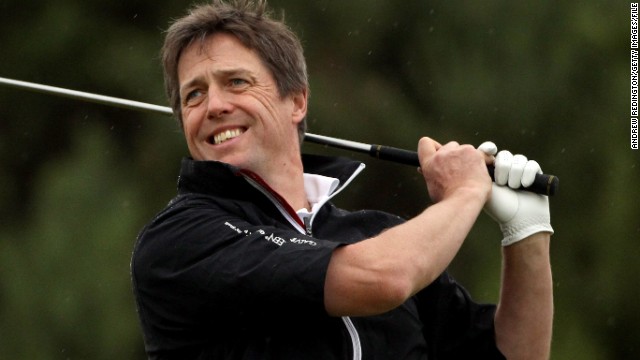 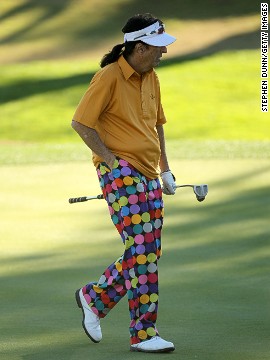 (CNN) -- He took on "the Dark Side," overcame a plane-load of rogue reptiles and struck down his enemies with "great vengeance and furious anger."

However, Hollywood star Samuel L. Jackson is more at home on the genteel fairways of a golf course.

The actor, whose numerous film credits include Pulp Fiction, the Star Wars prequels and, yes, Snakes On A Plane, is so dedicated to perfecting his game that he has a clause written into his contracts that allows him time off to play golf.

"They have to let me play at least twice a week," Jackson told CNN's Living Golf. "Generally they either move me onto a golf course or I join a club so I can play there."

The 64-year-old plays off a six-handicap and is a regular at celebrity pro-am tournaments, having lined up at famed courses such as St. Andrews and Pebble Beach.

Jackson has teed off alongside peers such as Clint Eastwood and Don Cheadle, as well as saxophonist Kenny G -- the man he rates the best amateur golfer he has played against -- but his favorite round was with 14-time major winner Tiger Woods.

"The first time I played St. Andrews (in Scotland) I actually played with Tiger," Jackson said. "That's kind of a big deal.

Dufnering back in style after PGA win

Will Tiger Woods win another major?

How Justin Rose shines under pressure

"The first time I met him I played with him at the Dunhill (Championship) and I think his advice to me was 'Follow me' -- and I actually did.

"I didn't hit the ball as far as he did but I kind of hit the same balls."

Jackson was born in Washington D.C and studied in Atlanta before moving to New York to pursue an acting career.

But it was in Los Angeles, the city he has now made his home, where he first discovered golf -- although it took some cunning and persuasion for friends to pique his interest.

"I had never played and they kept trying to get me to go out, and I wouldn't," Jackson recalled.

"They tricked me one day and told me they were going somewhere else and we ended up on a golf course.

"I didn't like the fact that they could do something that I couldn't and I started playing -- now they don't play with me!"

Jackson told the PGA Tour website that when he's not working he plays golf every day, sometimes shooting 27 holes at a time.

But, despite playing the game around the globe, there is one course that Jackson rates as pretty special.

"The best course in the world I've played? That would be Augusta National where they play the Masters," he explained.

"When I was shooting Freedomland (filmed in the state of New York) the producers gave me as my wrap gift three rounds of golf at Augusta."

Jackson's love of golf is now such an intrinsic part of his off-screen character that the profile on his Twitter page shows him channeling movie star in a sharp black suit -- while he holds a putter behind his back.

He also blends his celebrity status with his golf game to raise funds in his annual Shooting Stars charity fundraiser.

The 2013 event, held just outside London, raised funds for the Alzheimer's Association -- a charity that has a personal meaning for the actor.

"My mum passed from Alzheimer's last year -- my grandfather had it, her sister's got it, her brother had it, my paternal grandmother had it, so it seems like I'm kind of surrounded by it," Jackson explained.

"I may need the help of that organization at some point so I better raise some money for them!"

As henchman Jules Winnfield in 1994's breakthrough Pulp Fiction performance, Jackson memorably quoted the Bible as he sought "the path of the righteous man" -- and he also has advice for those seeking the perfect golf stroke.

"The first thing is keep your head down," he says.

"That's the hardest thing to do when you're a beginner because you always want to see where the ball is going, so you always tend to look up before you swing.

"So keep your head down, swing easy -- not hard -- find a tempo that's comfortable for you, and have fun. Don't take it seriously."