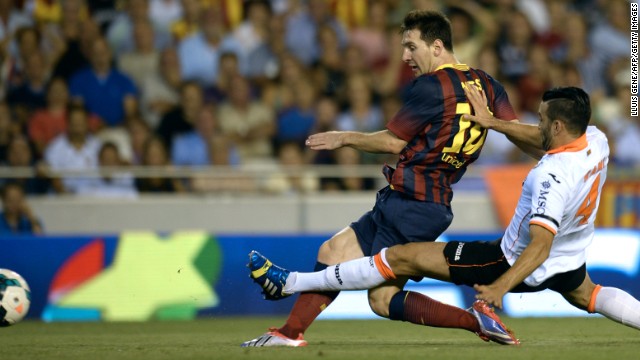 (CNN) -- On the day that Gareth Bale commanded headlines by joining Real Madrid in a big-money move, Lionel Messi made news by scoring a hat-trick for Barcelona in a 3-2 win against Valencia.

Messi's treble was his 23rd in the league for Barcelona and handed the away side a 3-0 advantage within 41 minutes at the Mestalla.

Barcelona then had to hang on at times after Helder Postiga netted a brace just before halftime. The home side also had a pair of penalty appeals waved away by the referee.

"We could have ended with a 3-3, 2-3 or 2-5," Barcelona manager Gerardo Martino told the club website. "Regardless of what could have happened I would leave here very pleased with how the team played. We found what we were looking for."

Cesc Fabregas set up Messi's first two goals after good work from holding midfielder Sergio Busquets, and summer signing Neymar linked up with the Argentine on the third.

Brazilian forward Neymar and Messi started together for the first time in the league after neither found the net in the second leg of the Spanish Super Cup last week.

"There was concern about how Neymar and Messi were going to interact on the pitch after they played their first match together," Martino said. "They fixed that in less than 24 hours."

Barcelona has won all three of its league games, like arch-rival Real Madrid.

Isco, a summer arrival from Malaga, accounted for the two other goals and Modric impressed with his work rate in midfield.

"He was fantastic," Ancelotti told Madrid's website, referring to Modric.

Switching to Isco, Ancelotti added: "He is playing very well and he makes it look like he's been here for years. He has character and ability and that is very important for us."

Dortmund on a roll

Only one team in the Bundesliga remains unbeaten through four games -- and it's Borussia Dortmund.

Dortmund beat Eintracht Frankfurt 2-1 thanks to a double from midfielder Henrikh Mkhitaryan.

Mkhitaryan scored his first two goals for Dortmund after his $35 million transfer from Shakhtar Donetsk.

It wasn't a vintage display by the Champions League runner-up but manager Jurgen Klopp wasn't arguing with the result.

"We have to play better football, there's no question," Klopp was quoted as saying by AP. "I've seen a few weaknesses in our build-up play and ideally we need to defend better. Still, with 12 points after four games, this is complaining at a high level."

In Ligue 1, Monaco moved atop the table with a 2-1 win over previously unbeaten Marseille. Marseille led 1-0 at home before Radamel Falcao and Emmanuel Riviere scored in the second half.

Falcao and Riviere have already combined for eight goals this term.