Mongolians bend over backwards to be world's top contortionists 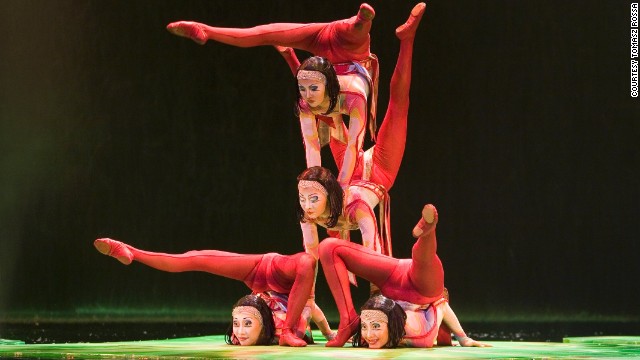 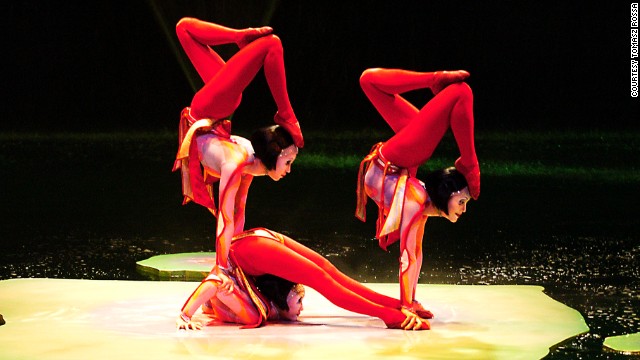 The show has been running at the Bellagio Hotel and Casino for the last 15 years, featuring clowns, trapeze artists and contortionists. 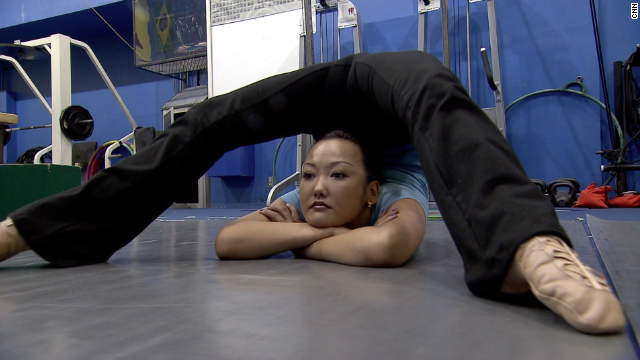 The Cirque du Soleil contortionists train for up to three hours-a-day in preparation for their spectacular show. 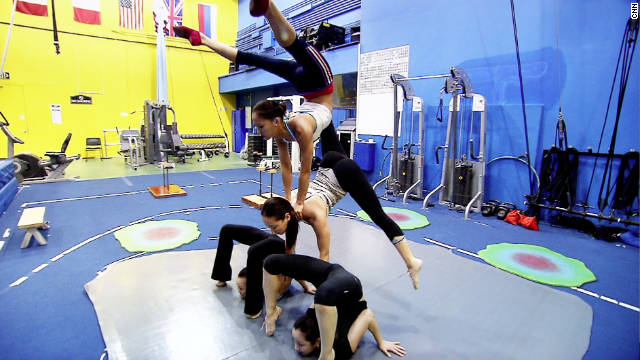 Of the show's 20 contortionists, almost all are women, and almost all hail from one country: Mongolia. 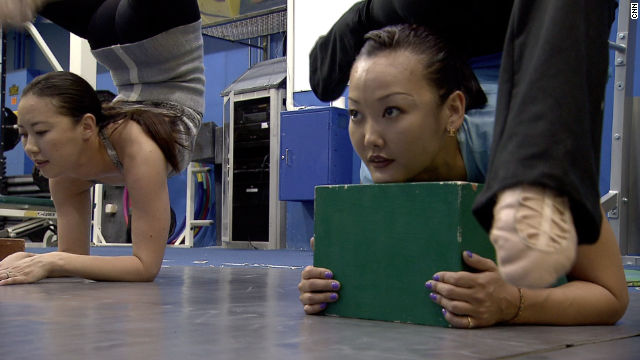 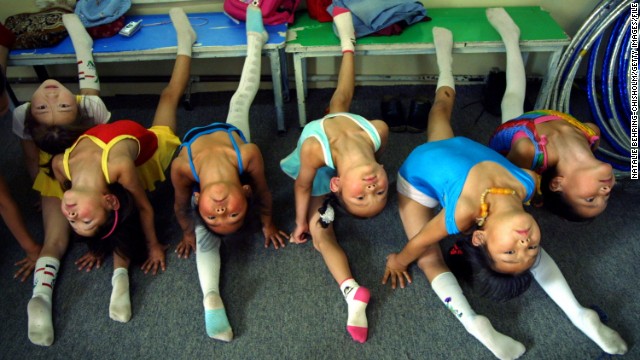 The road to circus stardom starts early in Mongolia, with children as young as five training up to three hours a day with organizations such as the Mongolian State Circus (pictured). 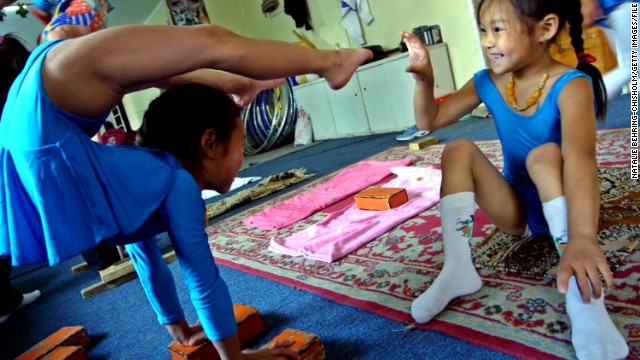 "In order to learn how to balance your body on your hands and on other people, you need to gain upper body strength. My homework used to be 300 push ups a day," said former contortionist Baasankhuu. 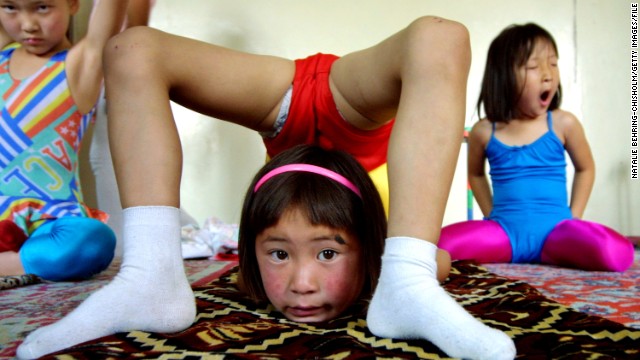 While Mongolian contortion has some similarities with ancient folk dances and yoga poses, it really took off as a professional art form with the launch of the State Circus in the 1940s. 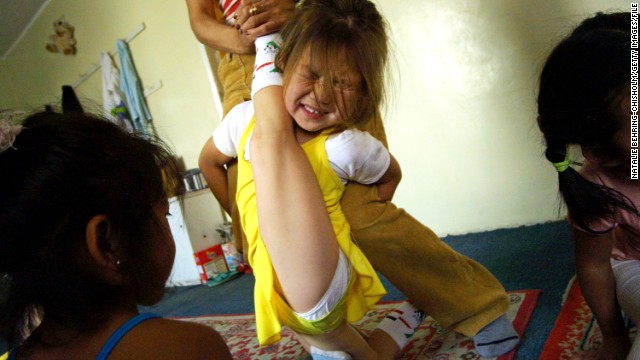 "Training from an early age is a huge factor in their success. Nobody is naturally a contortionist in adulthood. This level of flexibility requires a regimented and focused long term training program, lasting years," said Tim Allardyce of the British Osteopathic Association. 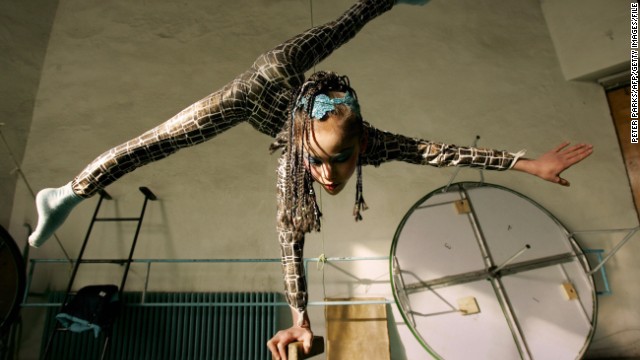 "It is so fluid and almost magical the way they can move their bodies. I think it is breathtaking," said Ria Martens, Cirque du Soleil artistic director.
HIDE CAPTION
Ladies in red
Head over heels
Bending over backwards
Behind the scenes
World stage
Child's play
Strength, flexibility, balance
Magic Mongolians
No pain, no gain
Suspend belief
<<
<

(CNN) -- As one woman in glittering Lycra gently bends her legs backwards over her head, another balances on top, slowly twisting her own limbs into a human pretzel.

But despite their ethereal demeanor, each petite performer possesses a rare Herculean strength and snake-like flexibility. And almost all hail from one country: Mongolia.

"When you want a top baseball player, sometimes you look in America. Where we need a contortionist we look to Mongolia," said the show's artistic director, Sandi Croft.

"When they dance they have a natural flexibility, even in their folk dance. It is just part of their culture to have this extra bend in delivery with their movement."

How do you become a contortionist?

The bright lights of Las Vegas are a long way from the plains of Mongolia, a sparsely populated country bordering China and Russia.

But in the last 70 years, Mongolia has become a breeding ground for the world's top contortionists, who have performed everywhere from Russia's Bolshoi Theater to the Monte Carlo International Circus Festival.

Indeed, while other well-meaning parents around the world might send their little girls to ballet or piano lessons, in Mongolia they're more likely to drop them off at contortion school.

Watch: The art of contortion

While Mongolian contortion has some similarities to ancient folk dances and yoga poses, it was the launch of the State Circus in the 1940s that saw it really take off as a professional art form.

When the contortion school's first official trainer, the now legendary Tsend-Ayush, began performing across the country, she quickly inspired a generation of girls hoping to quite literally mold themselves in her likeness.

By eight years old I could do most of the technical moves -- I was considered a professional.
Nomintuya Baasankhuu, former contortionist

One of those children was then-eight-year-old Angelique Janov, now the trainer for Cirque du Soleil's "O."

"We'd never seen anything like Tsend-Ayush before," she said. "It was her combination of strong technical skills and the beautiful way she moved to the music -- she made it look so easy.

"After that, every little girl wanted to be a contortionist."

Of course, training to be a contortionist is far from easy. Students as young as five train for around three hours a day, five days a week. They build up their strength, flexibility and balance through various exercises such as handstands, splits, and push-ups.

"My homework was 300 push-ups a day," said 29-year-old Nomintuya Baasankhuu, former contortionist and Arts Program director at the Arts Council of Mongolia.

"It was intense. But by eight years old I could do most of the technical moves -- I was considered a professional."

There are some risks -- Baasankhuu suffered a knee injury after falling from a human tower three meters high. But many contortionists insist that much like any sport, it is safe if done properly.

"Contortion is not dangerous," said 55-year-old Cirque du Soleil trainer Janov. "It's like yoga -- if you're stretching every day you stay young."

Such rigorous training regimes have been a huge factor in the Mongolians' success around the world. But how much of a role does genetics play?

"Some people are naturally more flexible and this is often due to genetics -- if one of our parents is flexible, we're more likely to be flexible too," said Tim Allardyce of the British Osteopathic Association.

"That said, a naturally flexible person would not be able to get themselves into positions that contortionists can without extensive training -- it is only very gradually, over many months and years, that the ligaments and muscles lengthen, allowing the joints to become more mobile."

For many youngsters in Mongolia, contortion is seen as more than simply a hobby -- it's a golden ticket to the world.

"That is why so many girls would like to become contortionists and travel around world and make living from it."

So what is it about these mysterious performers that continues to beguile audiences across the world?

Janov perhaps summed up their allure best: "It's the realization that an individual can do things that seem impossible."