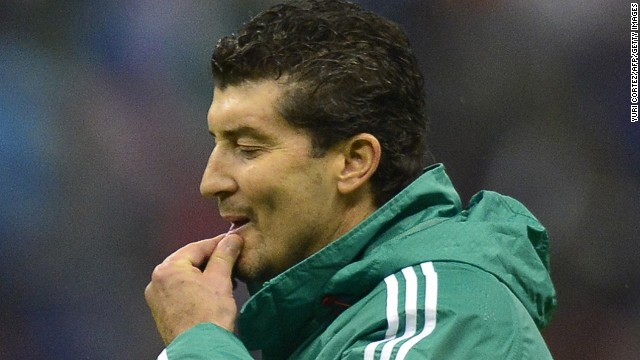 Jose Manuel de la Torre leaves the field after a home defeat by Honduras, his last match before being sacked as Mexico coach.
STORY HIGHLIGHTS

The reverse, just Mexico's second in 77 qualifying matches at Estadio Azteca, left the Olympic champion in fourth place in the CONCACAF group and struggling to earn an automatic place at the showpiece tournament in Brazil next year.

Only the top three teams have direct qualification -- the fourth finisher must play Oceania winner New Zealand in a playoff.

De la Torre said after the Honduras match that he would not resign, but the Mexican football federation announced Saturday that his two-year tenure was over in a brief statement on its website.

He led Mexico to victory in the 2011 Gold Cup, but the team lost in this year's semifinals and also struggled at the Confederations Cup in Brazil -- a rehearsal tournament for the main event next July.

Mexico has qualified for every World Cup since 1994, reaching the round of 16 on each of those occasions.

The Americans, meanwhile, dropped to second place after losing 3-1 against Costa Rica, despite Clint Dempsey scoring on his 100th international appearance.

The home side earned revenge for March's snow-affected 1-0 defeat in Denver, as goals from Johnny Acosta, Celso Borges and Joel Campbell put Costa Rica one-point clear at the top with three games to play.

Panama could have moved above Mexico, but only drew 0-0 with 10-man Jamaica -- with Rodolph Austin sent off in the second half.

In South American qualifying, Colombia joined Argentina on 26 points at the top after Friday's 1-0 win over fourth-placed Ecuador.

James Rodriguez scored the only goal in the first half, while Ecuador earlier had Gabriel Achilier sent off and then missed a second-half penalty by Walter Ayovi.

It guaranteed Colombia at least a playoff place, and hope of a first World Cup appearance since 1998. The top four teams go through automatically.

Chile moved up to third with a 3-0 win over Venezuela, while Luis Suarez scored both goals as Uruguay climbed to fifth with a 2-1 win away to Peru.

South Africa, the 2010 World Cup host, failed to make the final round of qualifying despite finishing its Group A campaign in second after a 4-1 win over Botswana.

Burkina Faso went through as Group E winner after a 1-0 win over Gabon meant second-placed Congo missed out, having drawn 2-2 away to Niger.

Nigeria won Group F after beating second-placed Malawi 2-0 at Calabar, while on Friday Ghana also qualified -- joining Algeria, Egypt and Ivory Coast in the five two-leg playoffs to be held in October and November.