Skypods: Are gondolas the next big thing in urban transport? 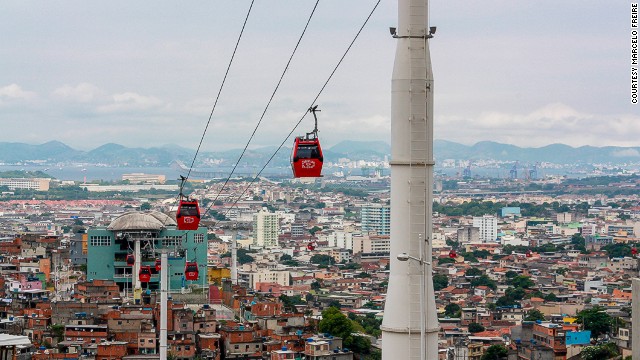 A ropeway hangs above the Brazilian city of Rio de Janeiro. The hanging pods have found a home in many South American cities in recent years. The latest is currently being designed and built in Bolivia's administrative capital, La Paz. (Picture courtesy of Marcelo Freire) 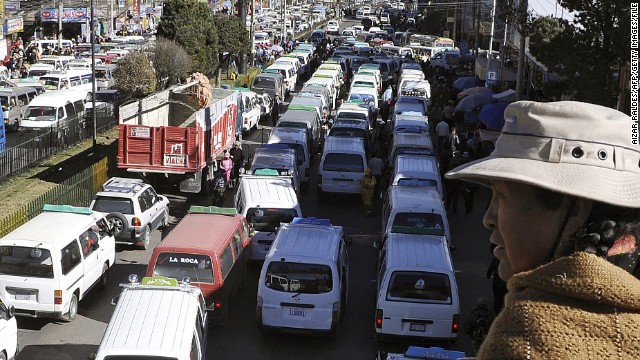 Traffic in La Paz often comes to a standstill meaning journeys only a few kilometers long can take up to an hour or more. 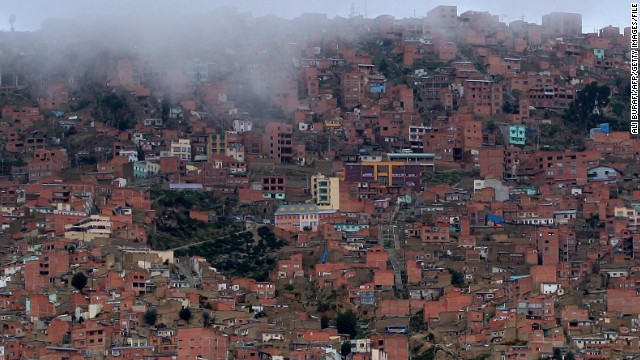 The steep hills and populous neighborhoods that surround La Paz make constructing wide roads or metro systems difficult. The ropeway system will allow travelers to glide down the city's steep slopes in a fraction of the time it would take to make the same journey by road. 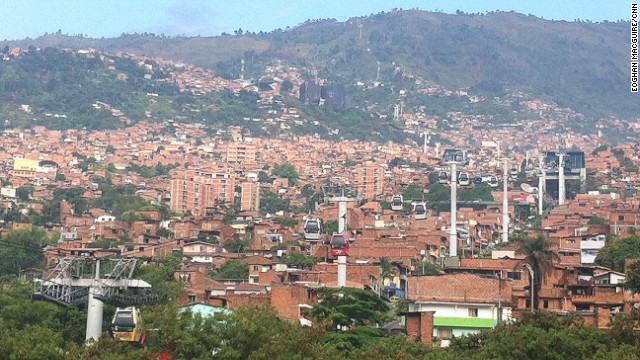 Medellin is regarded as the first city to introduce an urban gondola system. The Colombian city constructed its first Metrocable line in 2004. 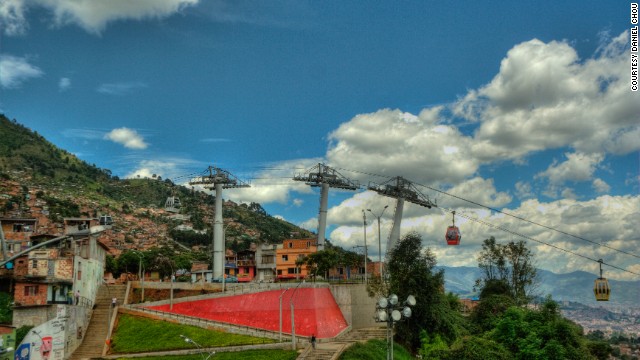 The Medellin Metrocable is widely considered to have increased mobility for some if its poorest citizens and was cited as a major reason behind the awarding of the 'Most Innovative City' title from the Urban Land Institute in early 2013. (Picture courtesy of Daniel Chou)
HIDE CAPTION
Urban hang out
Oversubscribed roads
Hillside barrios
Medellin's Metrocable
Award-winning concept
<<
<

(CNN) -- Urban transport in Bolivia's administrative capital of La Paz has always been about what goes up and down.

Situated in a deep canyon more than 10,000 feet above sea level, the Andean metropolis is one of the highest cities in the world. Densely populated barrios (neighborhoods) occupy the hills encompassing the bustling city center, rising a further 1,400 feet towards the satellite town of El Alto.

While these lofty locations create a dramatic setting -- particularly at night when the slopes are illuminated by thousands of house and street lights -- servicing them with reliable transit services has long proven difficult.

Bus journeys that are only a few miles long can often take up to an hour during busy periods as heavy traffic clogs the city's steep and narrow streets.

The capacity may be lower when compared to a metro line or a railway but these options are not suitable on these slopes
Javier Telleria, CEO Doppelmayr Bolivia

Come the second half of 2014, however, an all-new system of mass transportation is set to reduce the burden on these chaotic roadways.

The La Paz urban gondola will consist of three separate service lines stretching across a combined 10.7 kilometer (6.1 mile) area of the city.

These giant structures, most commonly associated with ski-resorts or mountaintop tourist spots, will cater for a combined hourly capacity of 9,000 passengers and come in at a reported cost of $235 million dollars.

With individual pods traveling at a speed of 18 kilometers per hour (11 mph), the gondola aims to offer a transit system many times faster than more traditional modes of city transportation. 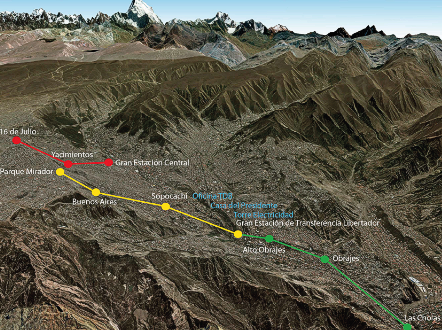 A map displays the planned route of the La Paz ropeway.

As it currently stands, "one person coming in the morning from El Alto to the south area spends between one and a half and two hours to reach his destination," explained Javier Telleria, CEO of Doppelmayr Bolivia, the company behind the project. With the gondola, this same journey will "take 24 minutes."

"The capacity may be lower when compared to a metro line or a railway but these options are not suitable on these slopes," he added. "They are also much cheaper and cause less disruption during the building process as they can be built in a straight line and take up a fraction of the space that a road or railway line would require."

These sentiments were echoed by Michael McDaniel, a designer from innovation firm Frog Design and advocate of an urban gondola for Austin, Texas, in an interview with Marketplace earlier this year. He estimated that the cost of building a gondola comes in at between $3 million and $12 million per mile, comparing favorably against $400 million per mile for subway systems and $36 million per mile for light rail systems.

One person coming in the morning from El Alto to the south area spends between one and a half and two hours to reach his destination
Javier Telleria, CEO Doppelmayr Bolivia

Cost benefits like these have been key in convincing South American cities like La Paz that urban gondolas are a viable and economical transport solution.

Rio de Janeiro, Medellin and Caracas have all introduced similar systems in recent years. When these projects have been successful, they have brought with them a wide range of social and economic benefits.

Medellin's Metrocable, which connects some of the city's poorest districts with its main metro line, was even recognized as a key factor in the Colombian city winning the prestigious Urban Land Institute 'Most Innovative City of the Year' award in early 2013.

Marketing executive at Doppelmayr, Ekkehard Assmann, meanwhile speaks of private compliments the company received from Venezuelan officials regarding the Caracas "Teleferico" project and how it has "increased economic opportunity" as well as "lowered crime rates" in many poorer and previously disconnected areas where stations are located.

For Steven Dale, founder of the Canada based website, The Gondola Project, these observations speak to the wider benefits of gondolas when introduced into the right type of urban environment.

"Being able to connect people from an island, which is what these barrios often are, to the wider city where they can access economic, social and cultural opportunities, that's the real value," Dale said.

"You wouldn't have been able to do it in certain places without a cable car" due to the various building and topographical challenges, he added.

See also: Could drones be the new highways?

Such positive social outcomes have got other cities around the world thinking about their own transport needs and the potential benefits urban gondolas can bring. 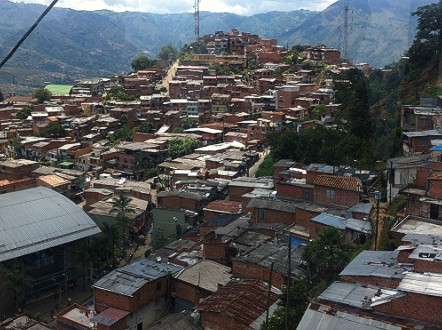 The view from inside a Medellin ropeway cabin

Projects are reportedly in the works in the likes of Lagos in Nigeria and the city of Toulouse in France, according to The Gondola Project. Whether these ventures meet with the same success however is far from certain.

Many skeptics point to the "cable car" system built in East London to connect the O2 Arena and the ExCel Exhibition Centre across the River Thames during the 2012 Olympic Games as an example of an urban gondola project gone wrong.

Although used by large numbers of people during the Olympics, passenger numbers today are a fraction of what they were when the facility first opened, according to figures provided to CNN by local politicians.

It's a nice bit of tourist infrastructure but it's not a serious mass transit solution in this part of London
John Biggs, London Assembly member

The surrounding area is connected to major tube and light railway transport routes but is not home to a large residential population that would have any practical need to use the structure frequently, explained London Assembly member, John Biggs.

"It's a nice bit of tourist infrastructure but it's not a serious mass transit solution in this part of London," Biggs said. "It has an annual operating cost which is a six figure sum. This is massively greater than the revenue from fares income."

Although critical of the London project, Biggs believes the gondola concept itself can still offer a valuable urban transit option if constructed in locations where there is demand and the economic case can be justified.

"Many towns (in South America) have quite a hilly landscape and they are a good way of getting people out to the suburbs," he said.

"There are (also) other parts of the world like across shipping lanes where they can in fact be quite useful, but none of these things really applied to London," Biggs added.