(CNN) -- The Victoria and Albert Museum in London, UK has acquired two models of the world's first 3D-printed gun.

The 'Liberator' pistol is the invention of Cody Wilson, a Texan law student whose company Defense Distributed caused a furore in May when it made blueprints for its firearm freely available on the internet.

The distribution of the designs led to Wired magazine naming Wilson as one of the '15 Most dangerous People in the World'. In theory, once downloaded, the designs would allow anyone with access to a 3D printer to make their own gun.

A few days after Wilson conducted his first successful test of the pistol, the U.S. government forced Defense Distributed to take the plans down. Wilson complied, but not before the design had been downloaded over 100,000 times.

The V&A museum has two copies of the Liberator pistol on display as part of London Design Week. The two prototypes on display -- one extant and one disassembled to show its components -- are part of a new collection of 3D objects. According to the curators, the guns "represent a turning point in debates around digital manufacturing." The Science Museum in London also has a Liberator on display.

Wilson says that in his view 3D printing is still in its infancy, and that it will become more significant in the future: "I see digital manufacturing playing a bigger role in our lives."

While he thought that the mainstream firearms industry is no longer as powerful as it once was, Wilson said he thought that the spread of weaponry will gradually increase, and that in future it will be easy for almost anyone to get a gun: "I think gun-making culture is on an understandable decline, but the barrier to entry to this culture will be lowered."

Considering it as a design object, Wilson believes that the Liberator's unusual shape has been part of its success: "Looking back, I would change nothing of the design. It was curious, boxy, alien. Its strangeness allowed it a better examination -- both as an article of design and as a concept." 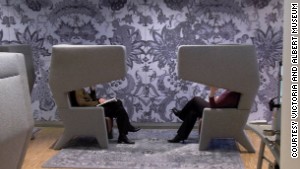 Alongside the 3D printed gun, the museum also acquired four other items which point to the future of design, including a homemade toaster constructed from odds and ends for just $6 and a futuristic armchair with elongated "ears" to create an artificial private space.

All the items were bought through the Design Fund to Benefit the V&A.

Martin Roth, the museum's director, said: "The generosity of supporters of the Design Fund ensures that the V&A is able to acquire for our permanent collections some of the best and most exciting design projects of our time.