Interactive: The decline of international adoption

By CNN Staff
updated 1:52 AM EDT, Mon September 16, 2013
The chart above shows the total annual decline of overseas adoptions globally; the graphic to the right details the changes in sending and receiving countries. Sources: The Hague Adoption Convention and Peter Selman, Newcastle University. 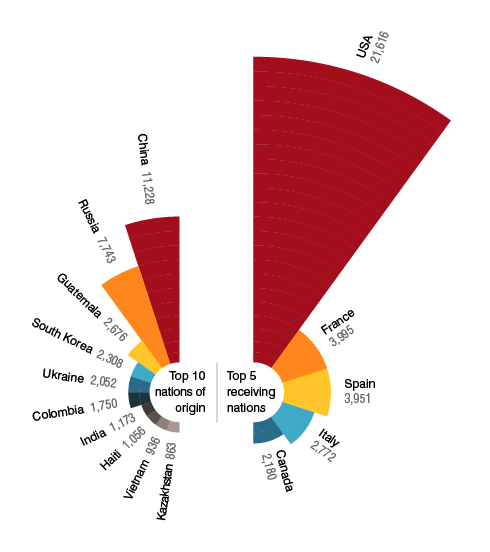 Editor's note: Editor's Note: In this series, CNN investigates international adoption, hearing from families, children and key experts on its decline, and whether the trend could -- or should -- be reversed.

(CNN) -- International adoptions steadily rose since the 1950s before exploding in the 1990s with the end of the Cold War and the opening of China and Russia. After peaking in 2004 with more than 45,000 overseas adoptions, the numbers globally have fallen by half in less than a decade.

After rising for decades, the number of overseas adoptions has dropped by almost half since 2004. In this series, CNN probes the reasons behind the decline and whether the trend could -- or should -- be reversed.
Interactive: Falling international adoptions
updated 1:52 AM EDT, Mon September 16, 2013

International adoptions steadily rose since the 1950s before exploding in the 1990s with the end of the Cold War and the opening of China and Russia. But for the past decade its been in freefall.
Rising overseas adoptions -- for black American children
updated 8:38 AM EDT, Tue September 17, 2013

While the number of international adoptions is plummeting, there is one nation from which parents abroad can adopt a healthy infant in a relatively short time: The United States.
Saving orphans or child trafficking?
updated 2:41 PM EDT, Wed September 18, 2013

Tarikuwa Lemma thought she was moving from Ethiopia to the U.S. for a "living study" program in the United States. She was wrong.
From refugee to soccer MVP
updated 3:46 AM EDT, Wed September 18, 2013

Born in a Cambodian refugee camp, Srey Powers became an all-star soccer player in the U.S. In 2010, she traveled to Cambodia to find her birth family.
Deborra-lee Furness: Fight the global orphan crisis
updated 1:11 AM EDT, Mon September 16, 2013

Actress, activist and wife of actor Hugh Jackman tells why she is one of the leading voices in the fight to keep international adoption alive.
U.S. adoptee activists lead fight to end S. Korean adoptions
updated 8:21 PM EDT, Mon September 16, 2013

South Korea was a pioneer of international adoptions. But now U.S. adoptees are leading the fight to halt the practice.