Ronaldo and Rooney star as Champions League bursts into life 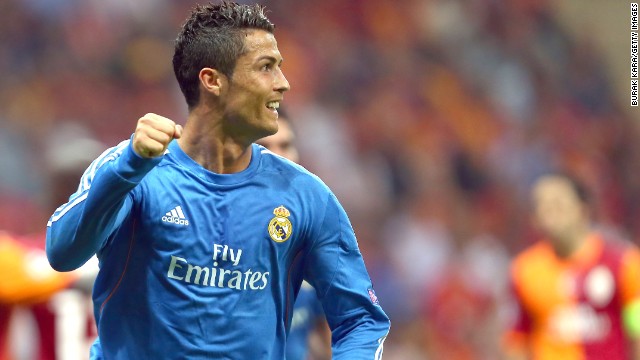 (CNN) -- Cristiano Ronaldo underlined just why Real Madrid agreed to pay him the big bucks on a scintillating evening of European football.

The 28-year-old, who inked a new five-year deal with the Spanish club on Sunday, completed a brilliant hat trick as Real raced to a 6-1 rout against Galatasaray.

Ronaldo had the final say in Istanbul as he danced past three defenders before blasting the ball into the net for his hat-trick.

Summer signing Isco had got Los Blancos off the mark when he picked up a long ball hit from beyond the halfway line by Angel di Maria and hit home after 33 minutes.

From then on it was one way traffic as Karim Benzema and Ronaldo added two goals apiece before Umut Bulut pulled one back for the Turkish champions.

The away victory saw the nine time European champions kick off a new era of European football under manager Carlo Ancelotti in some style.

A pulsating opening round of Champions League group matches featured a flurry of firsts.

David Alaba hit home a dipping free kick to set the Germans on their way before Mario Mandzukic powered in a header in a dominant first half.

Arjen Robben volleyed in a scooped pass from Alaba to tick off a first European win for Guardiola and his defending champions.

David Moyes also came through his first game as Manchester United manager unscathed as the club made its first European outing without Sir Alex Ferguson at the helm since 1985.

Wayne Rooney -- wearing a thick headband to protect an injury - set United on their way as he bundled home Patrice Evra's cross after 22 minutes.

Bayer Leverkusen leveled the match at Old Trafford in the second half thanks to Simon Rolfes.

But the German side's relief was short lived as, just five minutes later, Robin van Persie scissor kicked the ball into the net to put United back in front.

Moyes watched Rooney -- the star striker he sold to United from Everton in 2004 -- pounce again with his 200th goal for Manchester United.

The 27 year old coolly slotted in a low drive to become only the fourth player in the club's history to reach the landmark.

United poured forward on the break with some brilliant flowing play that was finished off with a fourth goal from Antonio Valencia.

With two minutes on the clock, Omer Toprak pulled back another away goal for Leverkusen but United came off the pitch 4-2 winners in the Group A clash.

In the Czech Republic, Manchester City recovered from a tentative start to cruise to a 3-0 away win against FC Viktoria Plzen.

New City boss Manuel Pellegrini led Malaga to the Champions League quarter finals last season and was looking for a positive display from his new charges.

Edin Dzeko broke the deadlock after half time when he slotted home a pass from Sergio Aguero, who used his muscle to hold off the Czech defence.

Yolo Toure conjured a curling goal from nowhere to double City's advantage before Aguero finally got on the score sheet to complete a pleasing away win.

Paris St Germain also earned a 4-1 win away at Olympiakos while Italians Juventus were held to a 1-1 draw by FC Copenhagen.