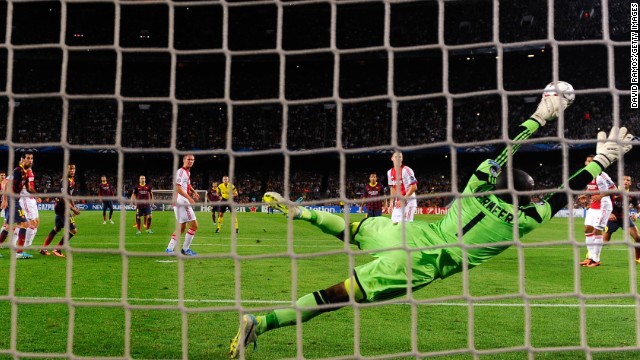 (CNN) -- Cristiano Ronaldo has attracted much of the spotlight this week, signing a new contract at Real Madrid that reportedly makes him football's best-paid player and netting a hat-trick against Galatasaray in the Champions League.

Messi scored three goals himself to take him closer to Raul's all-time record in Europe's top club competition and Barcelona thumped Ajax 4-0 to earn maximum points at the Camp Nou.

For all of its possession in the early stages, Barcelona failed to unlock the Ajax defense until Messi won a free kick at the edge of the box.

The Argentine took the free kick and put the ball past a helpless Kenneth Vermeer in the 21st minute to start the rout against the Dutch champion.

Messi doubled the advantage with another left-footed finish after good work from midfielder Sergio Busquets in the 55th minute before completing his treble in the 75th.

With 62 Champions League goals, the four-time player of the year could match or exceed Raul's tally of 71 sometime this season.

"It was important to start with a win, especially playing at home," Messi told Spain's Canal Plus. "We know how difficult these Champions League groups always are. In the second half we had the ball and controlled the match.

"We found it tough to pressure them initially because they were moving the ball well out from the back. But I think in general it was a great performance."

Barcelona manager Gerardo Martino will now fly back to his native Argentina to be with his family following the death of his father.

Barcelona and AC Milan are expected to advance from Group G, and Milan beat poor traveler Celtic 2-0 at the San Siro with two goals in the final seven minutes. One was an own goal by defender Emilio Izaguirre.

Milan was far from convincing, with the Scottish champion looking the more threatening throughout.

Chelsea has endured a slow start to its league campaign under prodigal son Jose Mourinho but an away loss to Everton on Saturday paled in comparison to Wednesday's 2-1 reverse -- at home -- to Basel.

Chelsea, the tournament winner two seasons ago and knocked out in the group stage last December, labored for most of the first half but took the lead on Oscar's low shot to the far corner deep in the first half.

Instead of adding to its advantage, Chelsea remained uninspired -- barring Oscar's shot that struck the crossbar -- and paid the price when Mohamed Salah leveled in the 71st.

Chelsea had eased past Basel 5-2 on aggregate in the Europa League in the spring.

"I'm the manager," Mourinho told Sky Sports. "I'm responsible for everything, especially in the bad moments.

"Tomorrow I will not wake up with a smile on my face but I have to wake up again.

"We have to get the points ... in the Champions League. We don't want to play in the Europa League."

Not a good start for Dortmund

Goalkeeper Roman Weidenfeller was shown a red card in first-half stoppage time for handling outside the box and manager Jurgen Klopp was earlier sent to the stands for berating the fourth official.

Aaron Ramsey continued his fine form for Arsenal, meanwhile, scoring the second goal in the Gunners' 2-1 win at Marseille after the Londoners' fluent passing game failed to click in the first half.