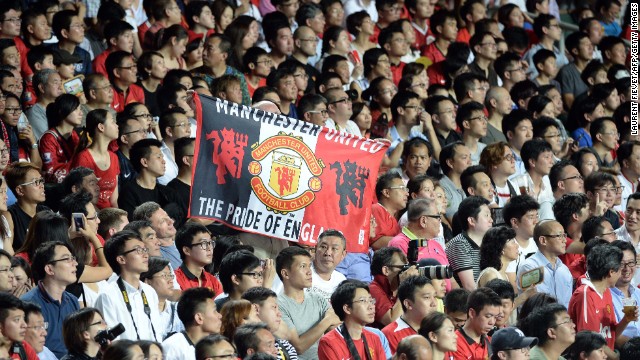 Manchester United played a pre-season game in Hong Kong in July and is hugely popular in Asia.
STORY HIGHLIGHTS

They might be even more disappointed after learning how much United made in its last fiscal year -- and therefore had to spend.

The record 20-time league winner in England -- self described as "one of the most popular and successful sports teams in the world" -- announced record revenues of $580 million for the year ended June 30, 2013 and said commercial revenues soared to a record $244 million.

It left executive vice-chairman Ed Woodward, who replaced David Gill in the United hierarchy, to declare on United's website: "It has been a little over a year since our IPO (initial public offering) and in that time we have delivered on our targets and objectives.

"Our commercial business continues to be a very powerful engine of growth enabling the team to continue to be successful."

United was linked with Cristiano Ronaldo, Cesc Fabregas, Ander Herrera and Leighton Baines -- who all stayed put with their current clubs.

"It's been pretty disappointing," said Andy Green, a United supporter who tweets about football finances. "I don't think it's Moyes' fault. He gives his targets to the club. I don't think he should be held accountable at all."

Meanwhile, city rival Manchester City bought four key players prior to August, Chelsea swooped for the likes of Samuel Eto'o and Willian and Arsenal smashed its transfer record by purchasing Mesut Ozil from Real Madrid for more than $65 million.

Tottenham splashed out on more than half-a-dozen stars, attempting to make up for the loss of Bale.

"United's commercial acumen isn't of value because it doesn't lead to a bigger stadium, lower ticket prices or better players," said Green. "You have all these commercial deals but it's no benefit to the football club."

United has made a lukewarm start to the league season, winning two of its four games, although it began its Champions League campaign with a win Tuesday against Bayer Leverkusen.

United is "delighted to have David Moyes lead our football team into a new and exciting chapter," Woodward said. "We look forward to a successful 2013/14, both on and off the pitch."