Football and homophobia: Is campaign tied in knots? 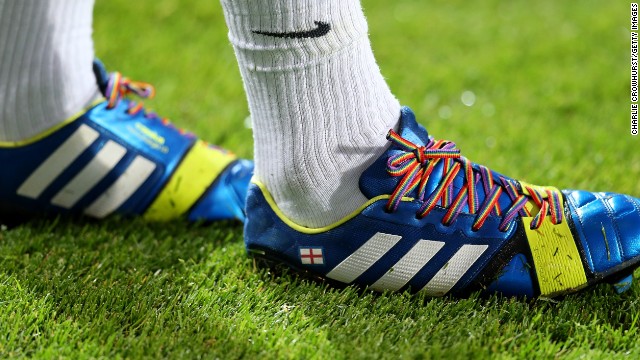 (CNN) -- It was supposed to provide the pot of gold at the end of the rainbow, but the latest effort to fight homophobia in football is in danger of fading into monochrome.

Stonewall, a UK-based gay, lesbian and bisexual charity, has teamed up with Irish bookmaker Paddy Power to promote a campaign which is asking football players across the country to wear rainbow colored laces.

The organization has sent laces to all 92 professional clubs in England and the 42 in Scotland with the hope they will be worn this weekend.

While some stars such as Queens Park Rangers and former England midfielder Joey Barton have been outspoken in their support, others are far from convinced.

Athletes: Sochi boycott not the answer

Should Sochi Games be boycotted?

Several top clubs have objected to the way the campaign has been handled with reservations over the role of Paddy Power -- a betting firm which is notorious for its risque marketing techniques.

Athlete speaks out against anti-gay law

Chelsea was just one club which objected to the bookmaker's involvement.

A club spokesman said: "It's important to say everyone at Chelsea is fully committed to tackling all forms of discrimination. We have fully endorsed the principles behind the campaign. We have a number is issues with it ... the tone of it, the lack of communication and the commercial part."

The Premier League was also unhappy with the way the campaign had been sprung on its clubs, claiming it would have done its utmost to aid Stonewall if it had been notified earlier.

"The underlying message behind this campaign is a good one -- indeed we and our clubs have worked hard with government and other stakeholders to ensure the whole equalities agenda is something we are fully aware of and engaged in," a Premier League spokesman said.

"However, we were not consulted about this particular campaign. Had we been involved earlier in the process we could have worked with Stonewall to consider things like boot deals, the use of particular betting partners, and other issues.

My rainbow laces have just arrived in the post. Lord only knows what shoes I'm going to put them in for #MOTD #RBGF pic.twitter.com/VFMatR4POo

"It is up to individual clubs and players to decide whether they support this campaign. We have let Stonewall know that we would be happy to talk to them in the future to discuss ways in which we could work together."

While several top clubs such as Manchester United and Tottenham have also refused to take part in wearing the rainbow laces, Stonewall is adamant the campaign has been hugely successful in drawing attention to homophobia in football.

Arsenal manager Arsene Wenger has given his players the opportunity to make up their own mind, while Everton has said its players will wear the laces for the game against West Ham.

"It has been a fantastic success," said James Lawrence of Stonewall told CNN.

"If you look at the response from clubs and individuals, we've had huge support.

"The whole crux of the campaign was to call on people who wanted to wear the laces was to do so. It's not for clubs to force individuals to do so.

"We want to give as many people who want to show their support the opportunity to do so."

The business behind the World Cup

Read: The Secret Footballer on homophobia

While Stonewall has been hugely encouraged by the attention garnered by the campaign, it also acknowledges that it has received criticism for teaming up with a gambling firm.

Paddy Power has courted controversy in the past with its advertising, with one commercial being pulled after it invited viewers to pick out transvestites and asked Cheltenham racing fans to "spot the stallions from the mares."

"Whenever you launch any kind of campaign there is always criticism," argued Lawrence when pressed on the organization's decision to team up with the betting firm.

"Working with Paddy Power opens up a whole new market and reaches people which Stonewall doesn't traditionally deal with.

"The support the campaign has gathered has blown us away."

Read: The gay footballer who chose freedom over 'constructed prison'

Paddy Power also insisted the campaign has been a success, due to the debate it has stimulated.

"Six days ago this issue was not on the news agenda. Now everyone is talking about it, which has to be a good thing," a spokesperson told CNN.

"The hashtag RBGF has been trending worldwide, the majority of feedback is hugely positive and we have had more requests for laces from the general public than we're currently able to cater for -- so we've ordered 10,000 more."

One of the groups which has been particularly critical of the campaign is FootballvHomophobia, which has taken umbrage with some of the language used to promote the laces project.

It is particularly concerned by the innuendo used and believes the campaign's tag line "Right behind Gay Players" is unhelpful in the battle against homophobia.

"As an initiative with a strong focus on education, we feel it is incongruous to run a campaign aiming to change football culture whilst using language which reinforces the very stereotypes and caricatures that, in the long term, ensure that homophobia persists.

" 'Rainbow Laces' may have an important short term advantage of drawing attention to the issue of homophobia in football, but this needs to be followed in the long term with an informed and sensitive discussion around the contested nature of what constitutes discriminatory, offensive language as opposed to acceptable banter."

However, Paddy Power said it had taken advice from Stonewall "to ensure the tone of this campaign is right."

"We've had a lot of positive support this week from the public in general and other bodies like the Gay Football Supporters' Network," its spokesperson said.

"We sent the laces out to clubs three days before the campaign went live to give them the opportunity to discuss this internally. The laces were accompanied by a full explanatory letter and invitation to get in contact with us if they had any questions.

"It's pretty sad that some of the powers-that-be deem this not enough notice when it's a simple case of players choosing whether or not they'd like to wear a pair of rainbow laces."

Paddy Power also brushed off criticism that its involvement had hindered the campaign.

"The rainbow laces we've provided are simply rainbow-colored and not branded, so they do not breach any FA rules or clash with any commercial deals," it said.

"It's a real shame that some in the game are using our involvement as a pretty weak excuse to prevent players from making a choice on whether they want to lace up to show their support."

However, the opposition has not put off other sports stars supporting the campaign, with English rugby players also getting in on the act.

James Haskell, an England international who plays for club side London Wasps, plans to wear the laces this weekend while former football player turned television presenter, Gary Lineker, has also spoken of how he will boast the rainbow colors.