Barcelona's 'tiki-taka' reign at an end? 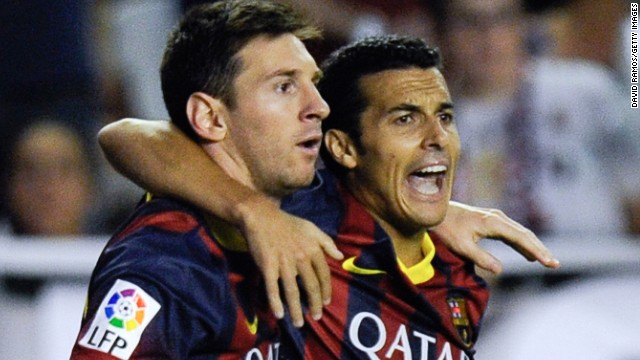 (CNN) -- For the first time in over five years, a run of more than 300 competitive matches, Barcelona had less possession than the opposition.

For this to happen against an also-ran in the Spanish league was some surprise, but for Gerardo Martino it was no big deal.

After all, the Barca team that he took charge of in July still notched a fifth successive La Liga win, beating Rayo Vallecano 4-0 on Saturday as Pedro grabbed a hat-trick.

But it does herald a change in approach for a team whose intricate style of "Tiki-taka" passing has made it one of the most successful clubs in world football -- a success mirrored and surpassed on the international stage by Spain.

The numbers weren't startlingly one-sided -- Barca had 49% of the ball compared to the home side's 51% -- but it was a big drop from the stats so customary under the guidance of previous coaches Josep Guardiola and Tito Vilanova.

Martino, however, is his own man -- and he is trying to put in place a "Plan B" when in the past it looked like the reigning Spanish champion had none.

"Rayo pressed us and they made it difficult to play short passes. We had the alternative to play long and at times you have to do this in these types of matches in order reach other parts of the field," the Argentine said.

"I really liked the team in the second half. We didn't have defensive errors and, like the match against Ajax, we improved over the course of the match. We have the capacity to score a lot of goals."

Pedro was the main beneficiary of Barca's firepower, being set up by midweek hat-trick hero Lionel Messi, Cesc Fabregas and then Neymar to take his league tally to five this season.

Fabregas wrapped it up in the 80th minute with a sumptuous strike, but keeper Victor Valdes also made a vital contribution against second-bottom Vallecano as he saved a first-half penalty soon after Pedro's opener.

"Valdes is playing at a fantastic level and all I can do is enjoy it as his manager. He had decisive saves and he saved a penalty," Martino said.

In Saturday's other games, Malaga drew 0-0 at Real Sociedad and Levante came from two goals down to earn a 2-2 draw at Almeria after the home side had Cristian Fernandez sent off for two bookings in a minute.

In Italy, Chievo moved out of the bottom three with a 2-1 win at home to Udinese, while struggling Sampdoria snatched a 2-2 draw at Cagliari in which three of the goals came in the final four minutes.

Genoa and Livorno drew 0-0 in the other game played Saturday.