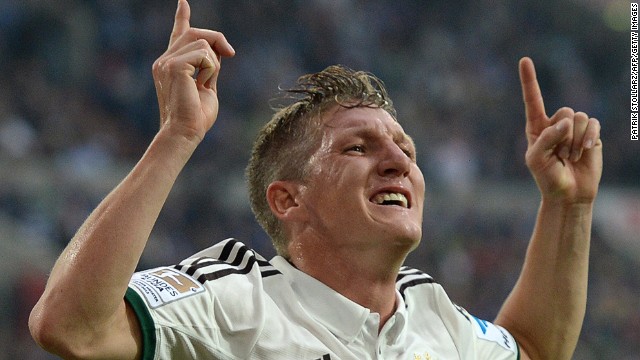 (CNN) -- Josep Guardiola hailed Bayern Munich's best Bundesliga performance this season after his side crushed Schalke 4-0 on Saturday to stay second in the league.

Bayern joined Borussia Dortmund on 16 points, as the leading side could only draw 1-1 away to another Bavarian side, Nuremberg, and lose its 100% record.

"That was our best Bundesliga performance of the season so far. We totally dominated one of the strongest teams in Germany," said coach Guardiola.

"We did very well. I'm satisfied and proud of this performance and my players."

Schalke, like Bayern, had won in the opening round of the Champions League group stage in midweek but had no answer to the European and German champion.

Vice-captain Bastian Schweinsteiger scored the opener on his return from injury, converting Arjen Robben's 21st-minute corner, and striker Mario Mandzukic made it 2-0 at halftime with a header from David Alaba's cross.

"Four-nil at home is a hiding and not we wanted at all," said Schalke coach Jens Keller. "We started very, very well, and had 20 very good minutes. But then we were hit by a double strike and we never recovered from it."

Dortmund, losing finalist in last season's Champions League, could not bounce back from a midweek defeat against Italian side Napoli.

Nuremberg had not won in five previous matches, and went behind eight minutes before halftime to a free-kick by defender Marcel Schmelzer.

However, Per Nilsson canceled that out six minutes after the break against a Dortmund side which had key players Robert Lewandowski and Henrikh Mkhitaryan on the bench, rested after their European exertions.

One point behind the top two, Bayer Leverkusen also has five wins from six after winning 4-1 at Mainz.

Australia striker Robbie Kruse scored twice and set up another for Lars Bender before Stefan Kiessling headed his fifth goal this season.

Hannover stayed fourth after beating Ausgburg 2-1 at home thanks to a late penalty from Hungary midfielder Szabolcs Huszti.