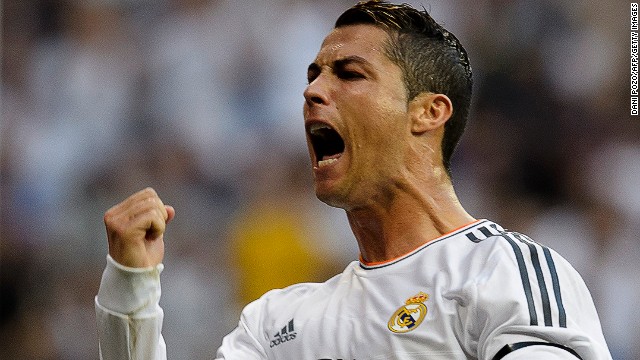 Cristiano Ronaldo celebrates after scoring a penalty during Real Madrid's 4-1 win against Getafe at the Santiago Bernabeu.
STORY HIGHLIGHTS

(CNN) -- If Cristiano Ronaldo feels threatened by Gareth Bale's arrival at Real Madrid, it certainly isn't showing in his performances.

Ronaldo followed up his midweek Champions League treble with another two goals in Sunday's 4-1 win over Getafe, while this season's marquee signing Bale was unable to make his home debut due to an injury suffered in the warmup.

The win kept Real in third place, two points behind Barcelona and Atletico Madrid after five matches, and the double lifted Ronaldo into fifth on the club's all-time scoring list with 208.

Ronaldo failed to score in Real's opening two La Liga matches, but including his hat-trick for Portugal in a World Cup qualifier against Northern Ireland he now has 10 goals in his last five games -- fully vindicating the bumper new contract he signed after Bale arrived.

Bale -- a world-record signing according to his former club Tottenham, but not as expensive as Ronaldo was in 2009 according to Real -- was replaced in the starting lineup at the Bernabeu by the highly-rated Isco, another newcomer to Madrid.

Bale scored on his debut in the 2-2 draw at Villarreal, playing an hour, and also came on to replace Isco in the 6-1 Champions League thrashing of Galatasaray -- but his only other time on the pitch this season is a substitute appearance for Wales before joining up with Carlo Ancelotti's squad.

"He had a small problem in the warmup. I don't think it is a big problem, but we have to wait till tomorrow to do a scan to see how bad the injury is," Ancelotti told reporters.

"The player wasn't comfortable, he was worried, so it was better to avoid problems. He was desperate to play his first game in the Bernabeu, but he has plenty of games ahead of him here.

"His pre-season was very unusual, not just physically, but mentally too. He was waiting for a long time (before signing) and I think this is a problem."

Getafe stunned the home crowd by taking the lead in the fourth minute when Angel Lafita's shot deflected in off Pepe, but the Real defender equalized just before 20 minutes after Ronaldo's shot was only blocked by keeper Miguel Angel Moya.

Ronaldo put Los Blancos ahead just after half an hour from the penalty spot, as Michel was ruled to have deliberately handled his free-kick inside the area, and he joined Real's former Mexico star Hugo Sanchez on 207 goals.

Isco, who last season inspired Malaga to the Champions League quarterfinals despite the club's financial problems, made it 3-1 in the 57th minute.

Fed by Ronaldo's quick free-kick, the 21-year-old Spain international made no mistake with his fifth goal in six games.

Getafe had Michel sent off five minutes from time when the midfielder was booked a second time, and Ronaldo crowned his night with a cheeky backheel to score from Sami Khedira's low cross.

Promoted Villarreal stayed fourth after drawing 0-0 at Celta Vigo, while there was a mid-table stalemate between Real Betis and Granada.

Meanwhile, Sunday's Istanbul derby between Besiktas and Galatasaray was abandoned due to crowd trouble at the end of the match between two of Turkey's leading teams.

Galatasaray had led 2-1 through two goals by Ivory Coast veteran Didier Drogba when his Brazilian teammate Felipe Melo was sent off in time added on, and fans then invaded the pitch.

"How the proceedings will continue will be announced later by the Turkey Football Federation," the Galatasaray website reported.

In Italy, Roma went top on goal difference after beating Lazio 2-0 in the capital derby for a fourth successive win.

Second-half goals from Federico Balzaretti and Adem Ljajic put the Giallorossi marginally above Napoli -- also with a 100% record after winning 2-1 at AC Milan.

However, the Italy striker had earlier missed the first penalty of his professional career, saved by keeper Pepe Reina, as Napoli beat Milan at the San Siro for the first time since 1986.

It left Fiorentina fourth on goal difference after a 2-0 win at Atalanta, while fifth-placed defending champion Juventus also ha 10 points after coming from behind to beat Verona 2-1 thanks to goals from summer signings Carlos Tevez and Fernando Llorente.

The battle for supremacy between France's two big-spending clubs ended in a 1-1 draw as Monaco came from behind to deny defending champion Paris Saint-Germain.

Zlatan Ibrahimovic put the home side ahead but Radamel Falcao -- like his Swedish striking counterpart, a marquee signing of intent -- leveled to keep Monaco top of the table, two points ahead of second-placed PSG.