Editor's note: Pop star Rihanna recently visited Phuket between stops on her Diamonds World Tour. During her visit she shared many of her experiences on social media, including a photo of her holding a loris -- an endangered primate -- and tweeted about a visit to a sex show. Phuket-based publisher Alan Morison says her visit highlights just how bad the island's main nightlife strip has become.

Phuket, Thailand (CNN) -- Rihanna, like the boy who pointed out that the emperor has no clothes, spoke the truth during her recent visit to the Thai holiday island of Phuket.

Or, this being the 21st century, tweeted it, which seems to get the word around even faster than a fairytale.

Yes, there are seedy X rated "ping pong" shows on Phuket, similar to those found on Bangkok's Patpong Road.

And yes, the locals will even abuse Thailand's wildlife if there's money to be made.

At least the singer hit the right note about Patong, the island's main tourist beach, and Soi Bangla, its tawdry walking street that so many Phuket tourists for some reason find irresistible.

Either I was phuck wasted lastnight, or I saw a Thai woman pull a live bird,2 turtles,razors,shoot darts and ping pong, all out of her pu$$y

Over the years, we've watched the Patong thoroughfare become more than just a place where you can have your souvenir holiday snap taken with a big-breasted ladyboy in a sparkly costume.

Slowly but surely, the sea, sun and sand that Phuket has sought to promote has become sex, stinks and sleaze in Soi Bangla.

There's an unmissable sewer smell from time to time -- a tribute to the local council and its ability to find excuses for doing nothing to solve Patong's problems.

Tuk-tuks taking over all the parking spots? Sorry, no answer there.

Roads with potholes big enough to swallow a motorcycle? Goodness, wish we could fix that.

Soi Bangla says so much more about Patong, and Rihanna expressed it well.

Can Rihanna help with truancy?

She tweeted with great honesty: "Either I was phuck wasted lastnight, or I saw a Thai woman pull a live bird,2 turtles,razors,shoot darts and ping pong, all out of her pu$$y."

The touts for the sex shows are probably the worst thing about Soi Bangla.

They are everywhere, sticking photos of body parts in the faces of tourists.

Nobody who takes a walk down the tourist walking street can avoid them.

And the poor, sad, cute slow lorises ... Rihanna said it all about them, too, in an Instagram photograph where she held one and the poor animal looked like a ball of fur on a stick.

In reaction to what threatened to be a deluge of bad international publicity surrounding Rihanna's revelations, Phuket authorities arrested two loris touts Sunday night. They were later released on bail.

Was the real issue solved?

The shocking state of affairs raised in Rihanna's tweet was not addressed.

There were no sex show touts arrested.

None of the tawdry Soi Bangla exhibitions closed.

The wildlife abuses and the sex hows will go on, and on, and on.

There's too much corrupt money involved for them to be stopped. 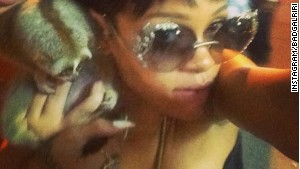 Rihanna to the rescue! This Instagram photo helped return two endangered primates to the wild.

How shameful it is that it takes a visiting celebrity to highlight that the authorities in Patong remain blind to the sleaze and the wildlife abuse around them.

If Phuket seriously wants to attract quality tourists, then Soi Bangla is the perfect place to start a cleanup campaign.

Put Soi Bangla back on track, and some other celebrities just might visit Phuket ... and tweet about the sun, sand and sea.

More: The trouble with Phuket and how it can be fixed

The opinions of this commentary are solely those of Alan Morison, an award-winning journalist based in Phuket and founder of the regional news and information site, phuketwan.com. Read more about Alan Morison.