What threat do foreign jihadists pose? 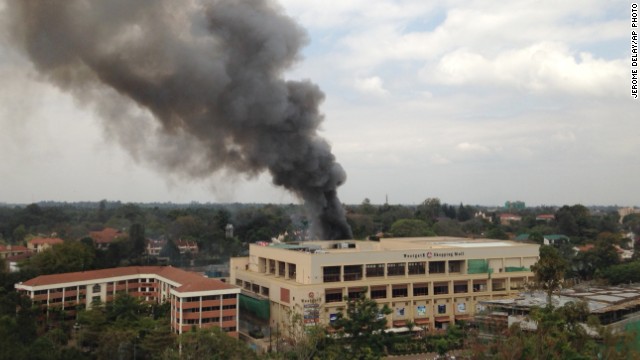 Heavy smoke rises from the Westgate Mall in Nairobi, Kenya, during a siege by Al-Shabaab fighters.
STORY HIGHLIGHTS

Editor's note: Jonathan Russell is a Middle East analyst at Quilliam, a London based think-tank. His most recent report used a new index to analyze the effectiveness of al Qaeda and can be found here. Follow Jonathan Russell and Quilliam on Twitter: @jrussellesq @quilliamf

(CNN) -- The Westgate Mall siege in Kenya has claimed the lives of more than 60 people including the Kenyan president's nephew, at least one Canadian diplomat and American, British, French and Chinese nationals. Al Qaeda's affiliate in Somalia, Al-Shabaab, has claimed responsibility for the siege and it has been reported that a number of the militants involved in the attack may have been foreign jihadists from Western nations.

If true, does the phenomenon of Westerners killing Westerners in Kenya represent a victory for al Qaeda and is this representative of the future of the group's transnational jihad? Does the radicalization of Muslims in the West pose a substantial threat to global security and what can be done to stop it?

Al Qaeda has looked to inspire Western Muslims to commit such atrocities for years with help from Anwar al-Awlaki's online sermons and the group's magazine, "Inspire," which has often praised the actions of Western Islamists in their own countries and abroad. Most notably, it commended the Tsarnaev brothers, the alleged Boston bombers as well as Roshonara Choudhary, the young girl from Newham, east who attempted to murder her local parliamentary representative. However, Western Muslims fought in the Afghanistan jihad against the USSR that originally gave rise to al Qaeda as well as in other conflicts in Bosnia, Chechnya, Iraq and Syria.

In reality, the numbers of Western Muslims abandoning their lives in the United Kingdom or the United States of America to go and join Al-Shabaab in Somalia is very small. In order to best analyze this phenomenon, they should be separated into three distinct groups: converts to Islam, Western Muslims, such as Abu Usama al-Britani -- a Briton believed to have been killed in Somalia -- and members of the Somali diaspora in Western countries.

Why Somali jihadists would strike Kenya

Kenya president: Cowards will be punished

Converts to Islam are particularly vulnerable to extremist ideologies and narratives because of exploitation by charismatic recruiters. Failures of moderate Muslim communities to welcome converts due to ethnic or regional differences or to answer the political or theological questions that many new converts have often led to their adoption by radical groups such as al Muhajiroun and its offshoots, that invariably have links to Islamist groups present in hot conflicts.

Under these radical wings, new converts to Islam are taught a highly politicized version of Islam that invariably focuses on current conflicts around the world, spun with an Islamist narrative that exaggerates the importance and benefits of violent jihad, the need for action against oppressors, or the moral degradation of Westerners and their societies.

These recruits are considered perfect for al Qaeda's future goals as, due to the fact that they are often not targeted for racial profiling and have greater access in their home countries, they can pass between borders relatively risk-free. With an estimated 40,000 Westerners currently living in Kenya, many more visiting as tourists each year, and an area of limited policing on the Somalia-Kenya border, Western members of Al-Shabaab constitute a potentially large threat to the country's security.

However, Somalia is not a particularly attractive destination for Western jihadists. When assessed in terms of cohesion and integration, Al-Shabaab is one of the weakest al Qaeda regional affiliates. Due to existing tribal hierarchies and fault lines, Al-Shabaab has significant infighting and is renowned for not being accepting of foreigners.

Western Muslim minorities, predominately from Pakistani and Bangladeshi backgrounds, therefore face similar issues to white converts when it comes to joining the jihad in Somalia. The recent killing of Abu Osama al-Britani and Abu Mansoor al-Amriki (Omar Hammimi), who had purportedly fallen out with Al-Shabaab's leadership reveals the extent to the lack of cohesion in the group.

However, for Islamist groups such as Hizb ut-Tahrir and al-Muhajiroun, this conflict is a well-established part of the radicalizing narrative, in much the same way that Afghanistan, Bosnia and Iraq have been, and will continue to attract Western Islamists with jihadist aspirations. In reality, Al-Shabaab are fighting a more nationalist struggle, clothing it in pseudo-religious garments and will continue to fail to engage significant numbers of Westerners.

The Somali expatriate community numbers more than 100,000 in the United Kingdom, 78% of whom reside in London, according to the Office of National Statistics.

The Organisation for Economic Cooperation and Development estimates more than 20,000 Somalis reside in the Netherlands and about 89,000 in the U.S. According to Canada's 2011 National Household Survey, more than 44,000 Somalis live within its borders. This is the most likely group of Western Muslims to be making trips to Somalia, and, if Islamists, are those most likely to be accepted by Al-Shabaab.

As communities that are often criticized for their lack of integration within Western societies and with some radical community leaders among them, members going to fight in Somalia has long been a concern for Western security services. Of greater immediate concern, however, is the Somali diaspora in Kenya, whom the Kenyan authorities will undoubtedly target in the coming weeks.

Al-Shabaab has shown itself to be exceptionally capable, both operationally and in terms of its use of secrecy, and increasingly extreme. According to our sources, while previously with limited operations outside of Somalia, Al-Shabaab conducted the preparation for these attacks months ago and had considerable surveillance in the shopping mall, and is likely delivering retribution against Kenya for its aggressive pursuit of Al-Shabaab in recent years.

In whichever way the Western contribution to Al-Shabaab will be depicted by the group for propaganda purposes, its lack of cohesion will continue to curb its effectiveness. The radicalization of Westerners is a significant problem that must be addressed in the United Kingdom and jihadist tourism is an issue in which security services are rightfully investing considerable resources; Somalia is simply the latest destination and not a particularly fashionable one.

The opinions expressed in this commentary are solely those of Jonathan Russell.

As they strolled through the mall, guns strapped to their torsos, the attackers chatted on cell phones while they sprayed bullets at shoppers.
Video fuels army looting claims
updated 7:32 AM EDT, Tue October 22, 2013

A leaked video footage from inside has sparked anger amid claims that it shows soldiers looting from stores as they hunted for the gunmen.
Survivor played dead to live
updated 3:08 PM EDT, Thu October 10, 2013

Elaine Dang pretended to be dead, and maybe because she did, she is alive to tell her story. She moved away from the crowd because she thought it would be most vulnerable.
U.S. launches raid on Al-Shabaab leader
updated 6:29 AM EDT, Mon October 7, 2013

U.S. Navy SEALs entered the southern Somalia stronghold of Al-Shabaab, the group behind the Kenyan mall attack, in a mission targeting one of its leaders.
Store in run by attackers or associates
updated 3:40 PM EDT, Fri September 27, 2013

Investigators have determined the attackers or their associates rented and operated a small store in the mall a year before the Kenya mall attack.
Families unsure if loved ones are dead or alive
updated 4:45 PM EDT, Thu September 26, 2013

There is evidence that replicating the 2008 Mumbai, India, attacks has become a major priority for al-Shabaab and al Qaeda.
Kenyans debate: Time to get troops out of Somalia?
updated 9:36 AM EDT, Sat September 28, 2013

Twenty men are engaged in fiery debate on a sidewalk near Nairobi's Westgate mall, where terrorists stormed the shopping center and killed at least 67 people.
Are mass murderers using Twitter as a tool?
updated 5:28 PM EDT, Fri September 27, 2013

It was the first major terrorist attack in history in which the group that mounted the operation used Twitter to announce to the world it was responsible.
Photos: Kenya mall attack
updated 10:42 PM EDT, Tue September 24, 2013

Photos from the attack as it happened.
From status symbol to palace of terror
updated 1:53 PM EDT, Tue September 24, 2013

A safe distance from Nairobi's Westgate Mall, several Kenyans stare through a stand of trees at the site of one of the nation's worst terrorist attacks.
Was 'White Widow' involved in attack?
updated 10:59 AM EDT, Thu September 26, 2013

British-born Samantha Lewthwaite was once seen as a kind of victim of the July 2005 London terror attacks -- the pregnant wife of one of the suicide bombers.
Official: Attackers 'only wanted to kill'
updated 10:22 PM EDT, Wed September 25, 2013

Some answers may be revealed in blood-stained halls or deep in the rubble of Nairobi's Westgate Mall. Others may never be known.
Photos: Kenyan mall's destroyed parking deck
updated 9:25 PM EDT, Thu September 26, 2013

Of all al Qaeda's affiliated groups, the Somali terrorist organization Al-Shabaab has over the years had the deepest links to the U.S.
Mall attack: Could it happen elsewhere?
updated 10:40 AM EDT, Mon September 23, 2013

It's hard to imagine a softer target than an enclosed, easy-to-enter space with large numbers of civilians milling about.
Q&A: Somalia's al-Shabaab militants
updated 9:59 AM EDT, Tue September 2, 2014

Al-Shabaab, an al Qaeda-linked militant group based in Somalia, is believed to be responsible for the deaths of aid workers and peacekeepers
Photos: Westgate Mall before the horror
updated 5:15 PM EDT, Tue September 24, 2013