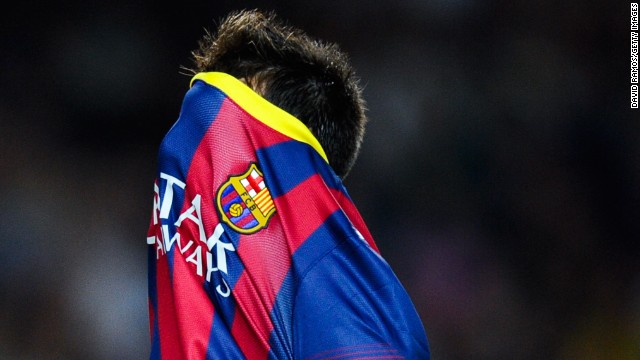 Lionel Messi scored against Sociedad but he also missed a good opportunity in the second half, leading him to hide his face.
STORY HIGHLIGHTS

(CNN) -- When Brazilian ace Neymar signed with Barcelona in May, observers wondered if he could develop a potent partnership with four-time player of the year Lionel Messi.

So far, so good for the tandem.

Neymar scored his first league goal and set up Messi as Barcelona defeated Champions League side Real Sociedad 4-1 to maintain its perfect record in Spain's La Liga through six matches.

Neymar has now logged at least one assist in four straight league games -- and three times Messi has been the grateful beneficiary.

Read: Neymar pledges to back Messi

Messi particularly likes playing against Sociedad, too, netting every time he has faced them at the Camp Nou since Sociedad earned promotion in 2010.

And a few days after Barcelona had less possession than the opposition for the first time in more than five years, order was restored -- Gerardo Martino's men enjoyed 71 percent of the ball.

Real Sociedad, now winless in the league since the opening weekend, struck the crossbar in the second minute but it was mostly one-way traffic at the other end thereafter.

Neymar bundled home the opener in the fifth minute, taking advantage of some indecision by keeper Claudio Bravo, and Messi's diving header from Neymar's floated cross doubled the advantage in the eighth minute.

Messi could have had a hat-trick within 40 minutes but he hit the crossbar from close range -- holding midfielder Sergio Busquets scored from outside the box seconds later for only his fifth league goal in five years -- and failed to connect cleanly after Barcelona cut open the Sociedad defense.

Messi then almost scored from another Neymar pass but saw his effort blocked.

The Argentine, following a typically driving run, pulled his jersey over his head after he blazed over the bar in the 52nd.

Alberto de la Bella pulled a goal back in the 64th minute but defender Marc Bartra -- replacing the injured Javier Mascherano -- restored the three-goal lead in the 77th with Messi's help.

It hasn't been the best of weeks for Borussia Dortmund. The Champions League finalist lost its opener in the European competition to Napoli last Wednesday and dropped its first points in the Bundesliga on Saturday.

And Dortmund needed extra time to see off second-tier 1860 Munich 2-0 in the German Cup on Tuesday despite fielding a starting lineup that included Robert Lewandowski, Marco Reus and Henrik Mkhitaryan.

Dortmund, mind you, did register almost 40 shots, compared to 1860's two in Munich, and struck the bar four times.

Substitute Pierre-Emerick Aubameyang scored from the penalty spot -- Dominik Stahl fouled Reus and was sent off -- before fellow summer signing Mkhitaryan made it 2-0 to book Dortmund's spot in the last 16.