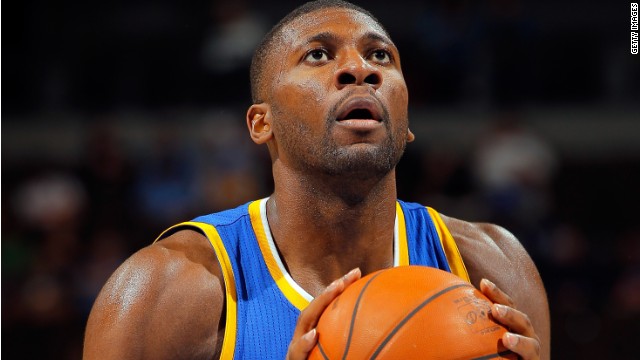 Golden State Warriors star Festus Ezeli moved to America in 2004 from his native Nigeria, and signed to the Warriors as a center in 2012. 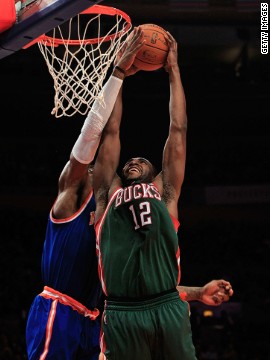 Cameroonian Luc Mbah a Moute entered the NBA Draft in 2008, where he was selected by the Milwaulkee Bucks. He was traded to the Sacramento Kings in June 2013. 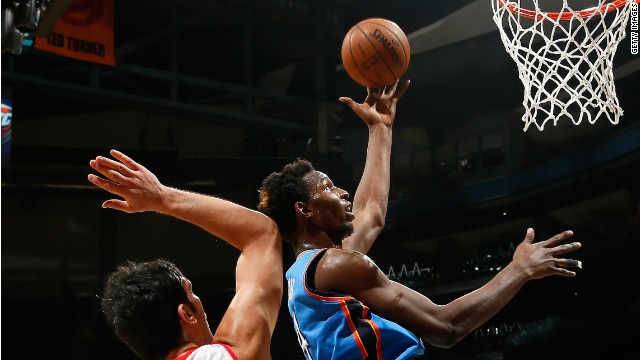 Tanzanian Hasheem "The Dream" Thabeet is a giant, measuring 7ft 3in. He plays with Oklahoma City Thunder. 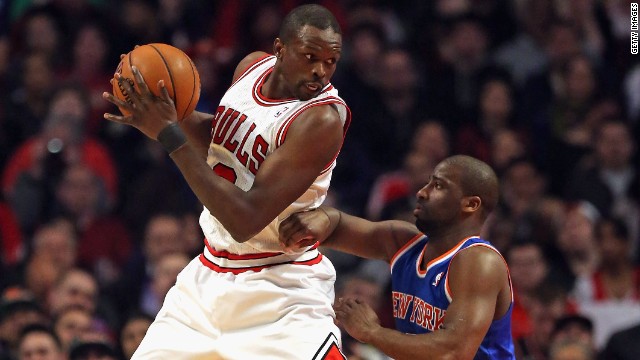 Luol Deng is British citizen who was born in Sudan. He has been with the Chicago Bulls since 2004. 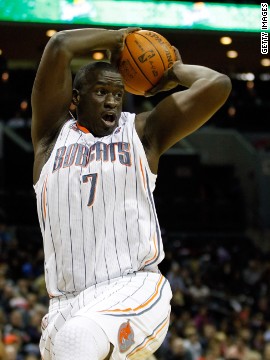 Desagana Diop, a Senegalese center, was the 8th pick in the 2001 NBA Draft. He has played for the Charlotte Bobcats since 2009. 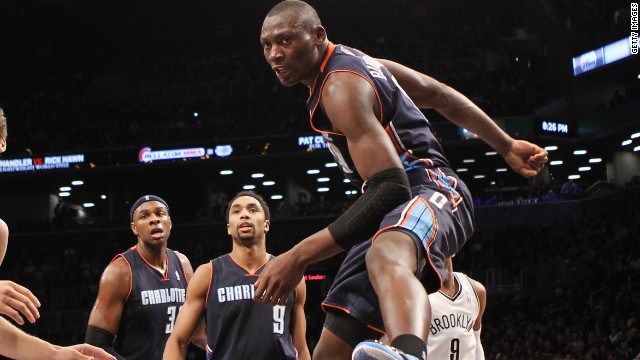 Born in the Democratic Republic of the Cong, 21-year-old Bismack Biyombo began his professional basketball career in Spain and in 2011 he was drafted to the NBA and traded to the Charlotte Bobcats. 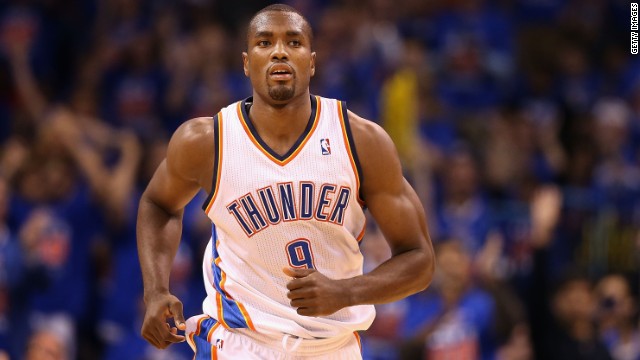 Born in the Republic of Congo, power forward Serge Ibaka played in the Spanish league before joining the Oklahoma City Thunder in 2009. Ibaka won an Olympic silver medal representing Spain in the 2012 Olympics. 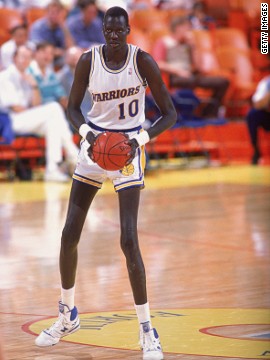 Sudanese Manute Bol played in the NBA from 1985 to 1995. At 7ft 7in, Bol was one of the NBA's tallest ever players. during his NBA career he played for the likes of Miami Heat and the Golden State Warriors. Bol died in 2010 from acute kidney failure. 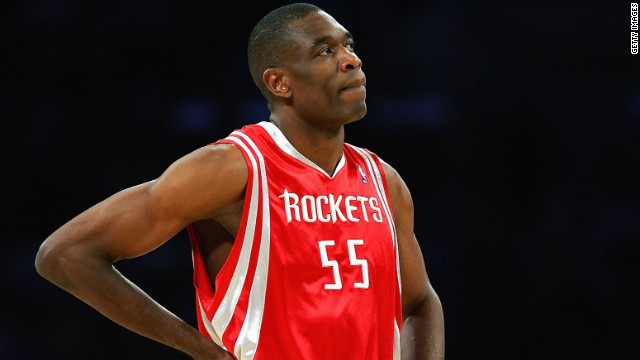 Referred to as one of the greatest shot blockers of all time, Dikembe Mutombo, from DR Congo, played for six NBA teams between 1991-2009. His longest stints were at the Denver Nuggets and the Houston Rockets. 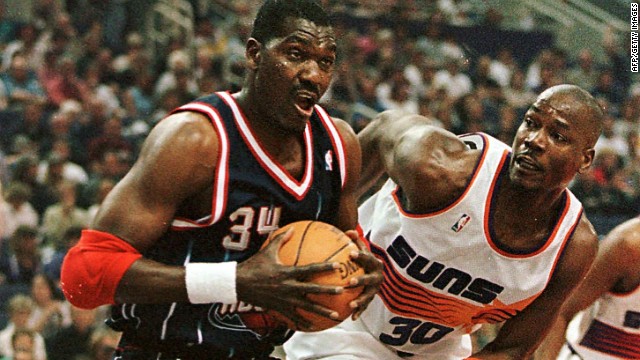 (CNN) -- Soccer may be the number one sport in most of Africa but basketball is growing fast and the NBA has set its sights on the continent to provide future stars, and tomorrow's fans.

In recent weeks, Amadou Gallo, managing director of NBA Africa, has embarked on a continent-wide tour including stop-offs in Ethiopia, Nigeria and South Africa. The talent hunt is part of the NBA's "Basketball without Borders" program, a community outreach project for young people, and is key to expanding the sport's global reach.

Basketball without Borders takes the top youth players, aged 19 and under, from all over the world and invites them to train with NBA stars and coaches. Launched in 2001, the program aims to promote basketball outside the U.S. and also offers young people the chance to develop life skills and education with their mentors.

"Part of making the game accessible is also putting it on the televisions," Gallo Fall said. "More players are going to come from the continent so we are going to have (NBA) games here, just like in Europe," he added.

In August, the NBA signed a multi-year deal with South African broadcaster SuperSport to televise games from the 2013-14 season in 47 Sub-Saharan territories.

Incoming NBA Commissioner Adam Silver -- who will succeed incumbent David Stern in February 2014 -- said the NBA is growing "exponentially" outside the United States.

He added: "The continent of Africa, China, increasingly India, there are opportunities for basketball throughout the world, so that's going to be my focus."

Although he recognizes that soccer is Africa's most popular sport, Gallo Fall sees no reason for competition. "Basketball is the number two sport globally and that holds true in Africa," he said.

"There's always the debate with football because that's a game that you can play anywhere so we are working to make sure that children who have passion for playing our sport have access to playing it," he added.

Read more: The 'Beautiful Game' as a way of life

There's roughly a billion people on the continent of Africa, so just a little small sliver of those billion people can result in a very successful business for us.
Incoming NBA Commissioner Adam Silver

Despite, a lack of infrastructure in Africa, the NBA has a long tradition of African players. Legends including Dikembe Mutombo from the Democratic Republic of the Congo and Sudan's Manute Bol have inscribed their names into the NBA history books as being among of game's greats.

While more recently Chicago Bulls' Sudan-born Luol Deng, who played as an All-Star in the 2011-12 season, and Cameroonian Luc Mbah A Moute of Milwaukee Bucks have broken into basketball's elite league.

He said: "Some tribes in Sudan and Senegal have an average height of 6-foot-6, which also happens to be the size of the average NBA player. People in Nigeria, Mali and Congo tend to be very big and physical. We need to build a strategy to go into these regions and cultivate the talent through infrastructure and instruction."

But Ujiri added that if Africa is going to produce the basketball stars of the future, development needs to start at a young age.

"Most kids in Africa don't start playing basketball until they are 13 or 14 years old. This puts them at a disadvantage because they lack the instincts and must work harder to develop," he noted.

And creating a younger fan base could also be good business for the NBA.

"We think there is a huge opportunity," said Silver. "I mean, there's roughly a billion people on the continent of Africa, so just a little small sliver of those billion people can result in a very successful business for us."

Oliver Joy contributed to this story.