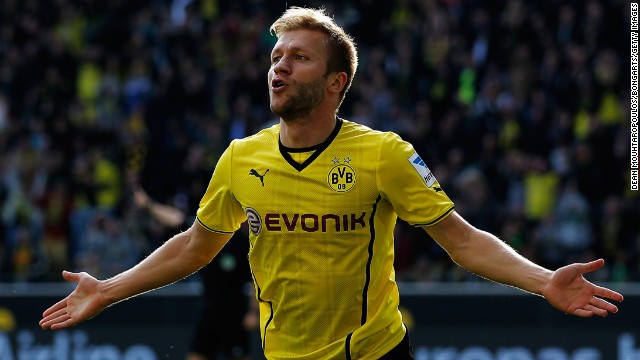 (CNN) -- Borussia Dortmund recorded an emphatic 5-0 win over second-from-bottom Freiburg on Saturday to improve an already healthy goal difference and stay top of the Bundesliga.

Jurgen Klopp's side lost their 100% record last weekend when they drew 1-1 with Nuremburg, but bounced back brilliantly against 10-man Freiburg at the Signal Iduna Park.

The rout got underway in the 35th minute when Marcus Reus tapped in after Robert Lewandowski's shot had been palmed away by goalkeeper Oliver Baumann.

The lead was doubled ten minutes later after defender Fallou Diagne was shown a straight red card for pulling down Lewandowski inside the penalty area. Reus stepped up to convert the resulting spot kick.

Lewandowski got in on the act in the 58th minute to make it 3-0 before adding a fourth goal 12 minutes later. Jakub Błaszczykowski's goal 11 minutes from time ensured Dortmund boosted their goal difference to plus 16 -- four ahead of their Bavarian rivals.

Bayern, who put four goals past Schalke last weekend, had to settle for a 1-0 win over Wolfsburg at the Allianz Arena on Saturday.

Bayern travel to Manchester City on Wednesday for the second round of Champions League group matches. Dortmund host the French side Marseille -- a team they lost to twice in the group stages two seasons ago -- on Tuesday.

Bayer Leverkusen kept pace with the leaders with a 2-0 win over fourth-place Hannover. First-half goals from Simon Rolfes and Sidney Sam earned the home side a sixth win in seven matches to consolidate third place, one point behind both Dortmund and Bayern.

Elsewhere, Hertha Berlin move up to fifth with a 3-1 over mid-table Mainz, while the game between Hoffenheim and Schalke ended in a 3-3 draw.