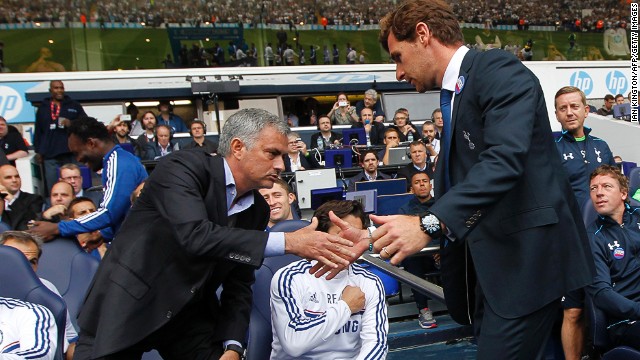 Chelsea manager Jose Mourinho (left) and Spurs boss Andre Villas Boas shake hands at White Hart Lane before kick-off. Villas-Boas was part of Mourinho's coaching set up for seven years before going it alone in 2009. The split strained relations between the two men who are no longer on speaking terms. Saturday's match was the first time the two had met as managers. 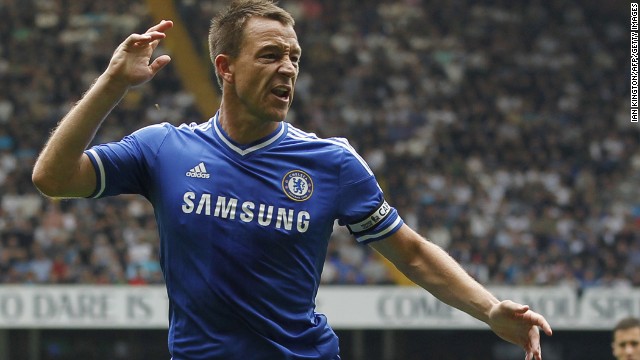 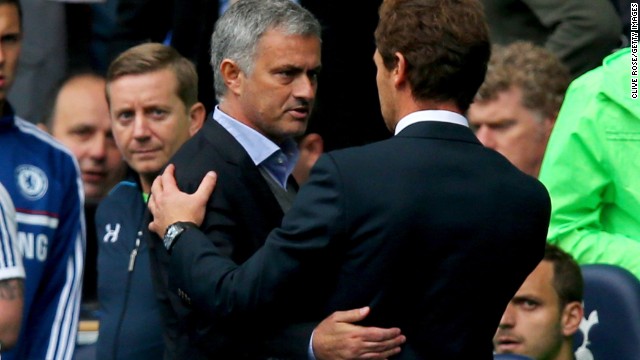 Mourinho and Villas-Boas embrace after the match at White Hart Lane. 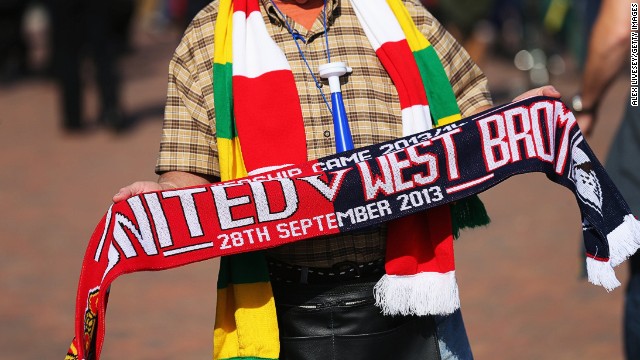 Remember the date: It will be West Brom fans, not the United faithful snapping this scarf up after the match at Old Trafford. West Brom's 2-1 win was the club's first at the Theatre of Dreams since 1979. David's Moyes' United haven't made a worse start to a season for almost a quarter of a century. 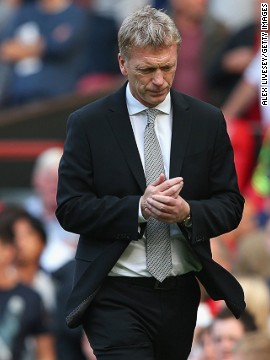 David Moyes has much to ponder following Manchester United's indifferent start to the season. Defeat to West Brom at Old Trafford in the league followed a 4-1 thumping by neighbors City last weekend. "You're always going to have bad results. It is how you deal with them. There are lots of games to come and it's about how you deal with them," Moyes said after Saturday's result. 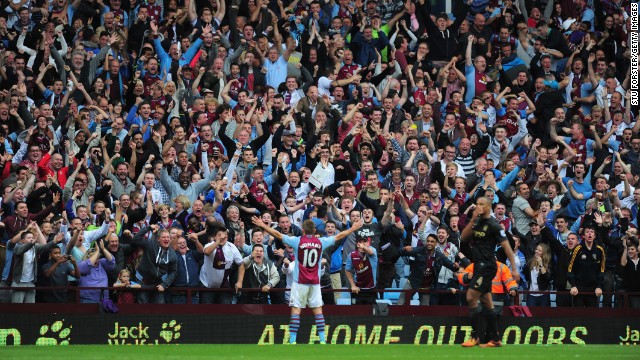 Aston Villa's Andreas Weimann laps up the cheers of home supporters at Villa Park. The Austrian forward scored the winner in a memorable 3-2 victory over Manchester City. 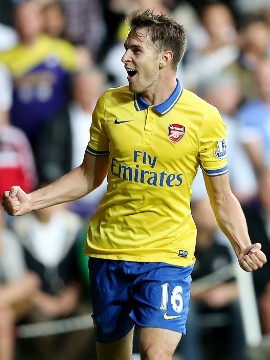 (CNN) -- Jose Mourinho and Andre Villas-Boas might be poles apart personally, but their teams could not be separated at White Hart Lane on Saturday as Chelsea drew 1-1 with Tottenham Hotspur in the English Premier League.

Villas-Boas, who spent seven years working under Mourinho at Porto, Chelsea and finally Inter Milan, was facing his old mentor for the first time since their friendship dissolved.

Most of the pre-match press conference questions on Friday had focused on the pair's fall out in 2009. Villas-Boas explained the men were once close, but didn't lose any sleep over the acrimonious split. Mourinho, meanwhile, steadfastly refused to talk about their relationship publicly.

"I don't discuss this with the media, it's a personal thing. I don't care what he says. I'm not here to do that. I'm not interested." Mourinho said Friday.

It was perhaps inevitable then that the two men exchanged a lukewarm handshake prior to the kick-off before what turned out to be a keenly contested affair.

Villas-Boas' Spurs side drew blood first in the 19th minute with a well-worked goal.

Christian Eriksen beat Frank Lampard before dashing forward and playing in Roberto Soldado. The Spanish striker then laid the ball off to Gylfi Sigurdsson, who fended off a challenge from John Terry before shooting past Petr Cech.

The Icelandic midfielder could have doubled the lead four minutes later but was denied by a Branislav Ivanovic block as he was waiting to tap the ball in.

At the start of the second half, Mourinho brought on Spanish midfielder Juan Mata for John Obi Mikel and Chelsea's fortunes soon started to improve.

Oscar should have converted a Fernando Torres cross three minutes after the restart and Mata had the ball in the back of the net in the 57th minute, only for the goal to be disallowed for offside.

Chelsea were now in the ascendency with Lloris denying substitute Andre Schuerrle after Torres had playing the German in on goal in the 78th minute.

But the game swung back in the home side's favor three minutes later when Torres was sent off after receiving a second yellow card for tangling with Jan Vertonghen for a second time in the half.

As the Spanish striker departed, so too did Chelsea's chances of winning and it was Spurs who were gunning for three points as the clock ticked down. Both Jermain Defoe and Sigurdsson had chances to win the game but neither could convert.

As the final whistle blew, the master and his former apprentice shared a rather warmer-looking embrace, safe in the knowledge that any personal or professional rivalries can be put aside until later in the season.

The return fixture at Stamford Bridge takes place in March, but two domestic cup competitions could still bring the Portuguese maestros together again long before then.

Last weekend, it was Manchester City fans who were cheering following a thumping 4-1 win over neighbors United. This week both sets of fans were reeling from shock defeats.

We didn't defend well in the second half, but when we got back in, I expected us to win it with the talent we have got
David Moyes, Man Utd manager

United lost 2-1 to West Bromwich Albion at Old Trafford while City went down to Aston Villa 3-2 at Villa Park.

A 54th minute goal from Morgan Amalfitano saw the visitors take the lead but it was canceled out three minutes later by Wayne Rooney.

The United of old may well have gone on to dominate the match after drawing level but it was West Brom's Saido Berahino who delivered the knockout blow in the 67th minute.

The win is West Brom's first at the Theatre of Dreams since 1979 and leaves David Moyes' United stuck in mid-table with seven points from six games -- their worst start to a league season for 24 years.

"We didn't defend well in the second half, but when we got back in, I expected us to win it with the talent we have got," Moyes said.

"People come here expecting us to play well, but we didn't play well. We tried to pick it up in the second half, but we got done by it as well. You're always going to have bad results. It is how you deal with them. There are lots of games to come and it's about how you deal with them, so we look forward to them," Moyes added.

After back-to-back defeats in the league, United now face a test of nerve in the Champions League when they travel to Shakhtar Donetsk on Wednesday.

City, meanwhile, were stunned by a second-half assault by Villa after Yaya Toure had volleyed home the opening goal in the 45th minute.

But two goals in two minutes from Leandro Bacuna in the 73rd minute and Andreas Weimann moments later sealed an improbable win against Manuel Pellegrini's multi-million dollar side.

Arsenal took full toll of the situation in the late kick-off beating Swansea City 2-1 at the Liberty Stadium.

Second-half goals from Serge Gnabry and Aaron Ramsey earned the Gunners all three points despite a spirited late surge from the home side which saw Ben Davies half the deficit.

After losing to Aston Villa on the opening day of the season, Arsene Wenger's side have now won five on the bounce and are two points clear of second-place Spurs. Liverpool will move up to second if they can beat bottom side Sunderland by more than two goals on Sunday.

In the remaining Premier League fixtures on Saturday, Southampton beat Crystal Palace 2-0 to move up to fourth in the table.