Atletico beat Real Madrid in league for first time since 1999 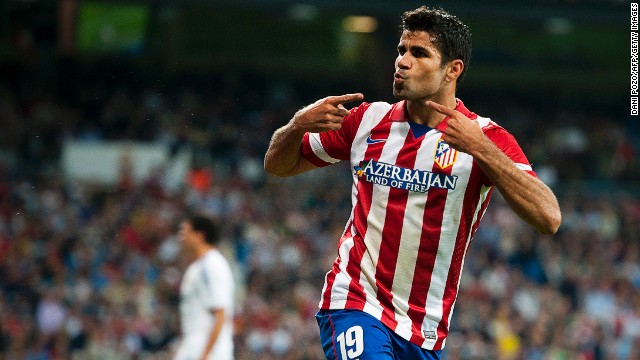 (CNN) -- Atletico Madrid recorded their first victory in the league over Real Madrid this century with a 1-0 victory at the Bernabeu on Saturday.

A first half strike by Brazilian striker Diego Costa maintained Atletico's 100% start to the La Liga season and secured a first league win against Real, home or away, since the 1999/2000 season.

The game's only goal came in the 11th minute when Costa gathered in Koke's inch-perfect through ball before executing a crisp side-foot finish past keeper Diego Lopez.

Real had their chances to equalize -- Karim Benzema going close with headers in the 23rd and 26th minute -- but Atletico's defense held firm as the first half came to a close.

Luka Modric and world-record signing Gareth Bale -- making his Bernabeu debut -- expanded the home side's attacking options when they were introduced at the start of the second half but it was Atletico who remained in the ascendency as the game wore on.

Costa should have doubled Atletico's lead in the 60th minute but scuffed his shot after being sent through one-on-one with goalkeeper Lopez before Real cleared their lines.

Sixty seconds later, Gareth Bale was brought down by Felipe on the edge of the Atletico penalty area only for Ronaldo to balloon the resulting free kick miles over the crossbar.

Koke came the closest of anyone to scoring in the 81st minute, hitting the woodwork with a glorious looping left-foot before Real pushed for an equalizer in the dying minutes of the game.

Their efforts came to nothing and defeat -- their first in the league this season -- leaves them on 16 points, five points adrift of Atletico and Barcelona.

The reigning champions also made it seven wins out of seven in La Liga on Saturday with a 2-0 triumph over lowly Almeria but the victory was overshadowed by an injury to Lionel Messi.

The Argentine was substituted midway through the first half after hurting his thigh and now is a doubt for Tuesday's Champions League tie against Scottish champions Celtic.

Despite leaving the game so early, Messi still found time to influence the match scoring his eighth league goal of the season in the 20th minute.

A neat exchange of passes with Alexis Sanchez was finished with a sweetly struck left-foot shot.

Adriano made it 2-0 in the 56th minute as Barcelona cruised to a comfortable victory.

Elsewhere, Valencia's 1-0 win over Rayo Vallecano lifts them to sixth in the league while Real Sociedad and Sevilla played out a 1-1 draw.

There were two matches in Serie A on Saturday with Napoli going top for 24 hours at least after a 2-0 away win at Genoa.

Two first-half strikes from Goran Pandev earned Rafa Benitez's men a comfortable win ahead of what promises to be a fascinating Champions League tie against Arsenal on Tuesday.

AC Milan recorded their second league win of the season with a 1-0 win against Sampdoria at the San Siro on Saturday evening. Slovenia's Valter Birsa scored the game's only goal in the 46th minute to lift the Rossoneri to eighth in the table. Sampdoria stay in 18th place.

Roma can return to the top if they beat Bologna in Sunday's evening kick-off. Inter Milan will also leapfrog Napoli if they record any sort of win at Cagliari.

Meanwhile in France, Paris Saint-Germain continued their unbeaten start to the season with a 2-0 victory over Toulouse on Saturday.

Brazilian teenager Marquinhos opened the scoring for the French champions in the 41st minute before Edinson Cavani made sure of the three points scoring from the penalty spot in the 79th minute.

The win sees PSG, who entertain Benfica in the Champions League on Wednesday, move one point ahead of Monaco who face Reims on Sunday evening.

Marseilles are currently third, level on 17 points with Monaco after a 2-0 win at Lorient. Fourth place Lille lost ground on the top three after a 0-0 draw at Lyon.