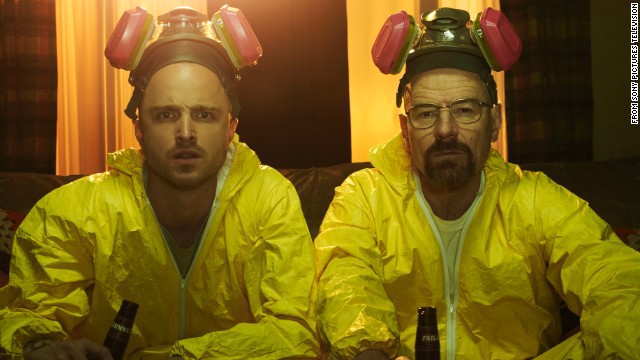 "Breaking Bad" may be history, but the show is still in the spotlight. After a final stretch of Emmy wins in August, the series, which starred Bryan Cranston, right, and Aaron Paul, is now under contention because of action figures based on the drama. Here are some indelible scenes from the past five seasons that put "Breaking Bad" on the map: (SPOILER ALERT: Read no further if you don't want plot points revealed). 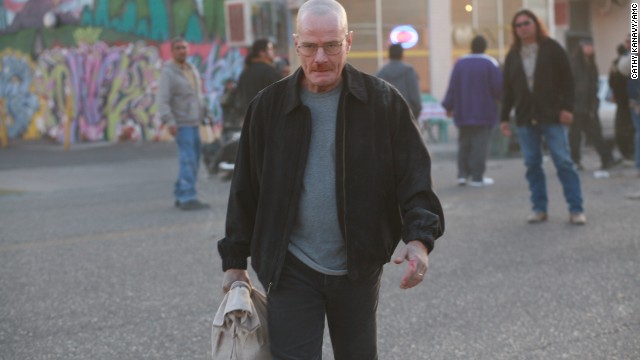 This scene from Season 1 offers one of the first glimpses into how smart and ruthless Walter White (Cranston) can be when cornered. Here, Walt leaves with a bag of cash after igniting an explosion at the lair of Tuco, a midlevel meth dealer. 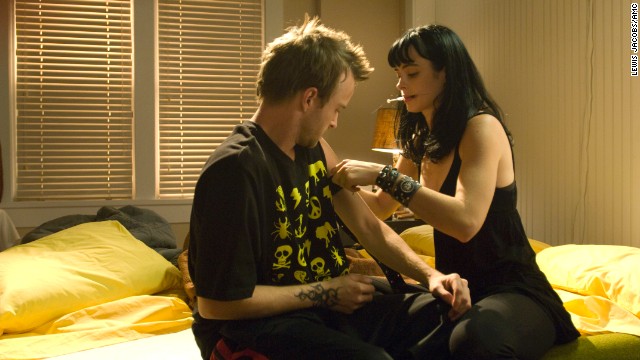 Jesse Pinkman (Paul), Walt's apprentice, does heroin with his neighbor girlfriend Jane in Season 2. Soon after, Walt discovers Jane choking on vomit in her sleep and does nothing to save her, a decision that made his character unredeemable in the eyes of some viewers. 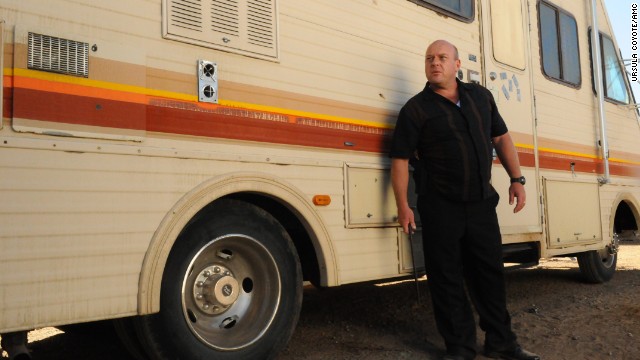 Walt's brother-in-law Hank (Dean Norris), a DEA agent, tracks down the RV that Walt and Jesse have been using as a meth lab, trapping Walt and Jesse, who are hiding inside. But Walt orchestrates a fake emergency phone call to lure Hank away and escape without being identified. 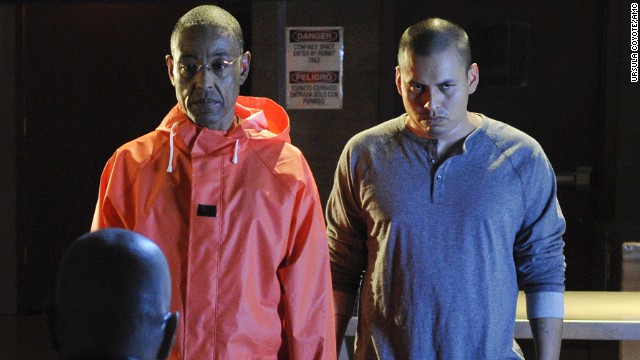 Drug lord Gus Fring (Giancarlo Esposito, left), livid over an act of betrayal by Walt and Jesse, sends a brutal message in this soon-to-be bloody scene from Season 4. 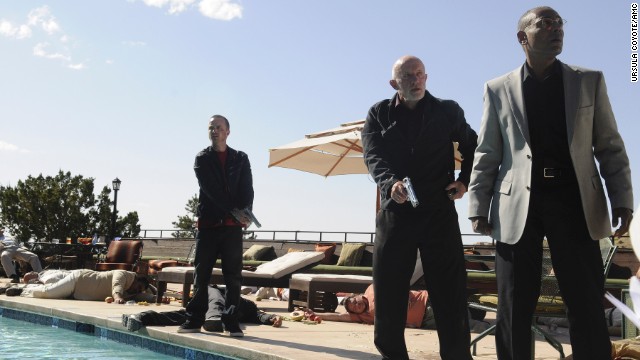 In this dramatic Season 4 showdown, Gus takes Jesse and loyal henchman Mike Ehrmantraut (Jonathan Banks) to Mexico to meet with the vicious leader of a drug cartel. One poisoned bottle of rare tequila later, the three are fleeing for their lives. 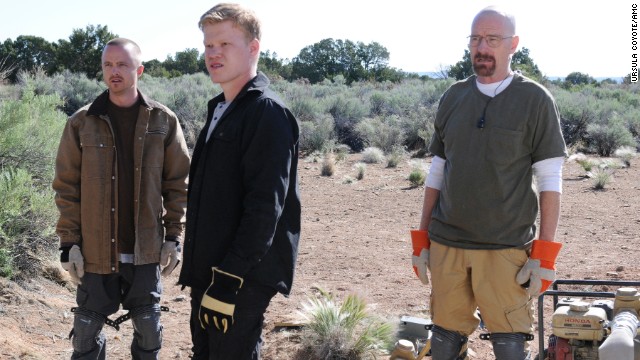 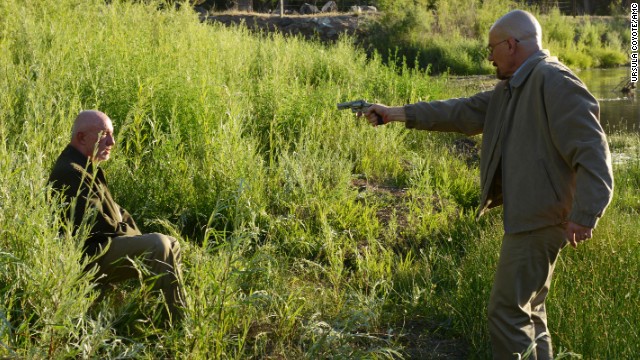 As a seasoned fixer, the unflappable Mike is usually the one pointing a gun at someone. But Walt, growing increasingly volatile, turns the tables on him in this momentous scene from Season 5. 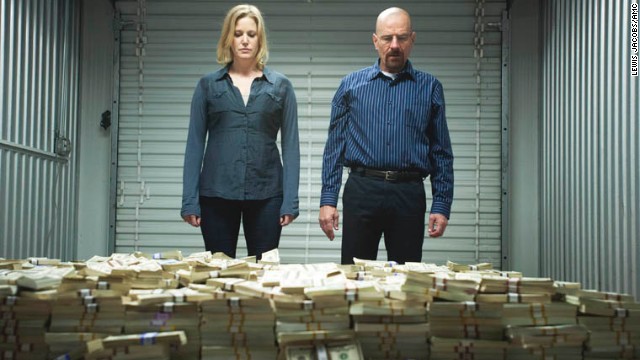 Walt and wife Skyler (Anna Gunn), a reluctant accomplice in his tenuous drug empire, visit a storage unit where she reveals to him a massive stack of unlaundered cash. "I want my life back," she pleads. "How big does this pile have to be?" 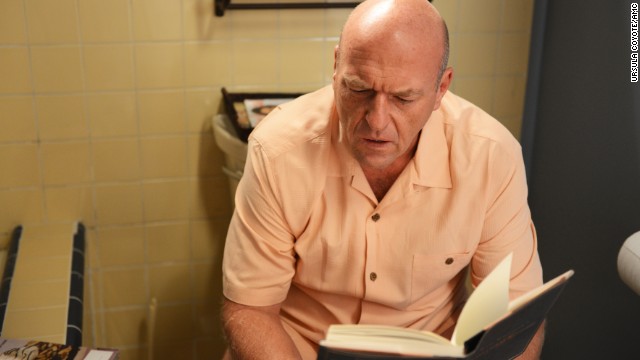 In the last episode before "Breaking Bad's" final run, Hank discovers some incriminating bathroom reading in Walt's house. What will he do with this startling information? The answer may drive the narrative for the show's final eight episodes. 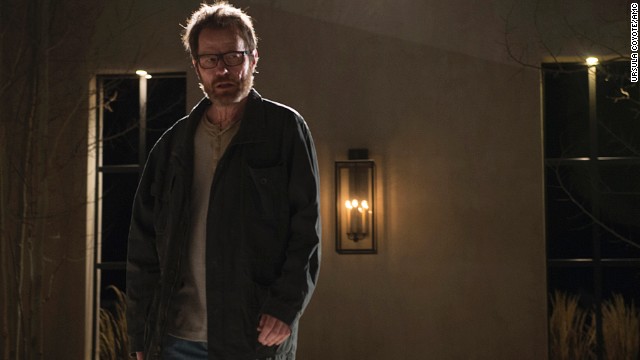 There's satisfaction for Sunday night's well-executed series finale -- appreciation for the inspiring and historic work from "Breaking Bad" creator Vince Gilligan, star Bryan Cranston and the rest of the team. But, ultimately, sadness that it's all over. (Thankfully, "Breaking Bad" has spared its fans from the "rage" portion of the series finale roller coaster -- unlike some shows we could mention.)

So if you're mourning the end of "Breaking Bad," and wondering just how you'll fill that void, know that your misery has plenty of (famous) company:

Last episode ever of Breaking Bad. It would not be possible without all of you. Thank you all for the amazing ride. Love you Vince!!!!

I am breaking sad right now. I have little blue tears streaming down my face. RIP #BreakingBad. You changed TV forever.

Don't my bosses know that a 5am call time the morning after the Breaking Bad finale isn't nice? I need to stay up & cope/process/grieve.

My dogs are so depressed this is the last night they will get to watch me watching #BreakingBad :(

I need a breaking bad helpline. I don't know how to feel.i don't know anything anymore. 😔😞 what can fill this void!!? #goodbyebreakingbad

almost like losing a good friend. congrats to @BreakingBad_AMC a historic run.

A perfect series gets a perfect ending. I miss Breaking Bad already.

Spoiler alert! The series finale of #BreakingBad was effin' awesome. This show has never been anything less that fantastic. Congrats to all!

Aaaaaaaaaand ... here come the waves of depression as I realize there will never be another new episode of Breaking Bad. #GoodbyeBreakingBad

Goodbye Breaking Bad. You were the best thing that ever happened to me. Sorry to my girlfriend and my parents and my future children.

BREAKING BAD (2008-13) was, alongside THE WIRE, the greatest television show of the 21st century. Thank you to everyone associated with it.

For the most part, viewers have applauded the conclusion to "Breaking Bad's" five-season run on AMC, but there are those who have been critical of its neat and tidy ending.

"I wish I'd been able to respond to how fundamentally sympathetic the finale was to Walt," says NPR's Linda Holmes. "Here, however, I could not escape the feeling that by earning anyone's sympathy, Walt was getting away with one last self-aggrandizing con. ... I didn't crave a happy ending for him, and he got about as happy an ending as he possibly could have."

Esquire magazine agreed, critiquing that while the final stretch of season five "had some great individual episodes," Sunday's series ender "was maybe the most conventional of the entire series. ... We watched as a tarnished hero killed the baddies, set his captured sidekick free, and died. Endings don't come much more Hollywood."

Yet none of those who were disgruntled by the final moments of chemistry teacher-turned-meth kingpin Walter White could argue that the finale, and the series as a whole, was par excellence.

For what it's worth, we're with Variety's AJ Marechal:

I hope there are budding little future TV writers out there who watched #BreakingBad, deeply absorbed and will bring us the next masterpiece