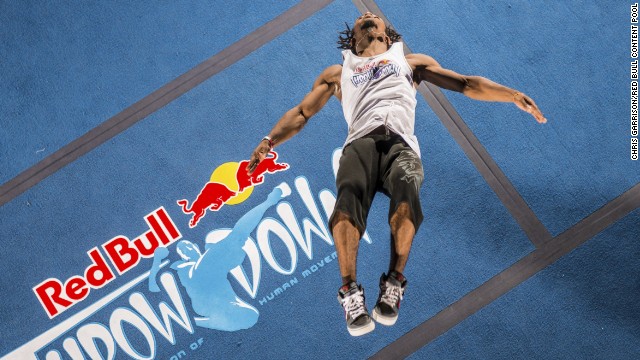 This August, Atlanta hosted the first international tournament of "tricking," a new sport which combines martial arts kicks with acrobatics and dance. 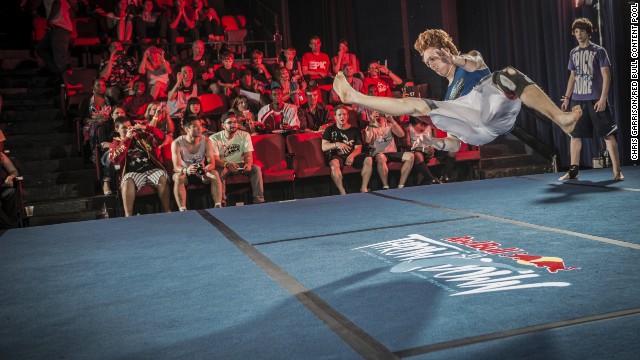 Trickers go head-to-head in 90-second battles -- firing off acrobatic runs in quick succession in a bid to impress the judges. 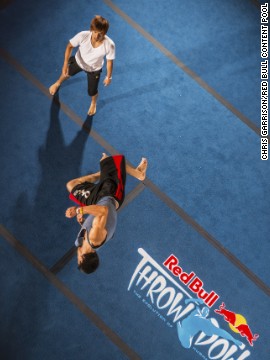 "Watching a trick battle is like watching fireworks," says the Throwdown's Sport Organizer Rory Bratter. "... The things they're doing are so explosive and powerful." 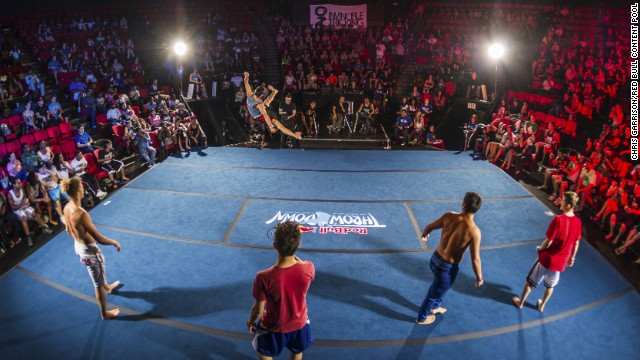 In addition to individual battles, three-on-three matches pit teams of trickers against each other, with judges scoring competitors' kicks, tricks and transitions. 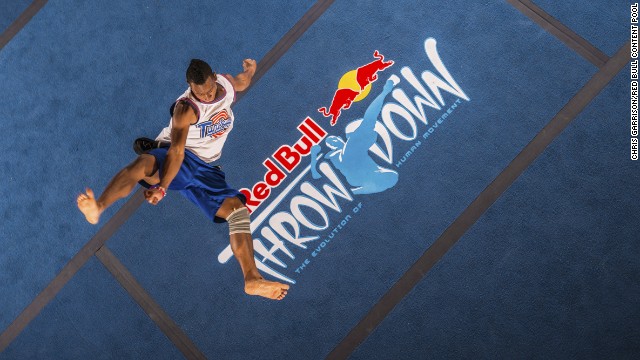 In both types of battle, each tricker is free to showcase their own style, incorporating influences and techniques from wide-ranging pursuits including hip-hop dancing, capoeira, cheerleading and free-running 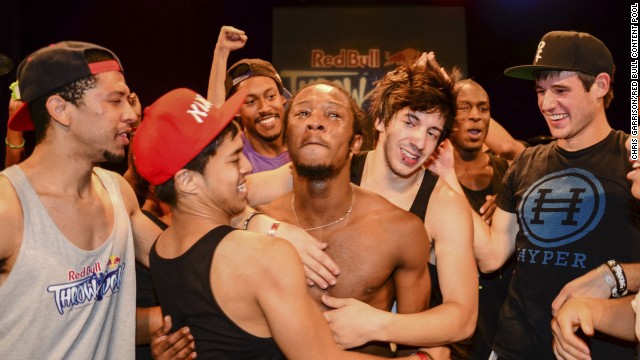 23-year-old tricker Will Coneys (center) was crowned the individual champion of the Throwdown. 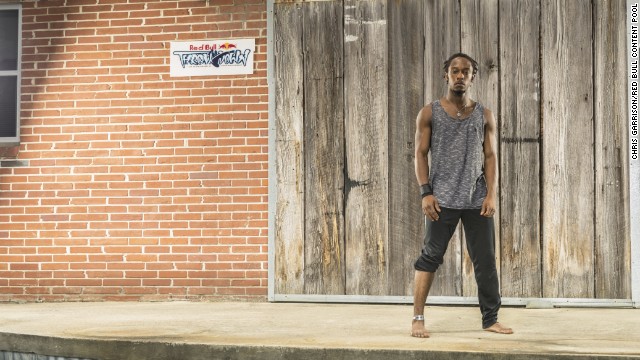 Coneys, from Arlington, Virginia, studied dance and taught himself acrobatic moves as a child. He took martial arts lessons from age 16 and found out about tricking through other martial artists. 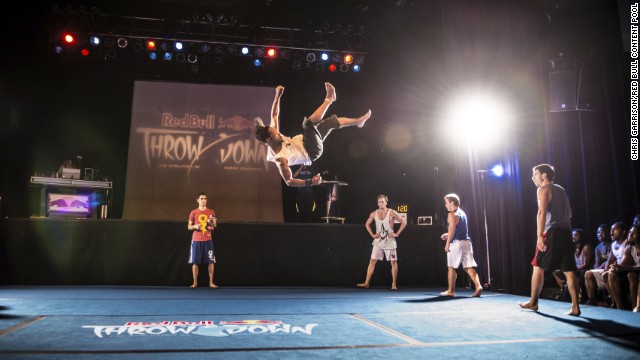 Coneys attributes his success at the tournament to the power he injects into his tricks, achieving great height and completing impressive aerial maneuvers. 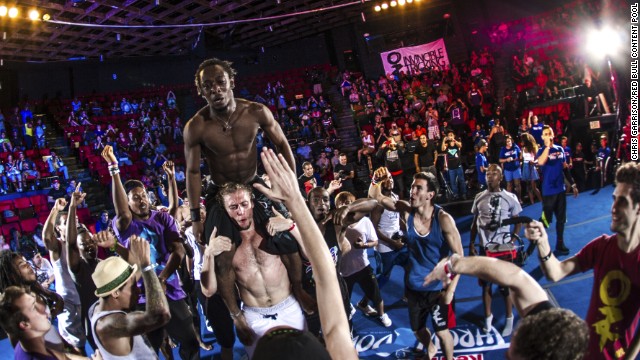 "For me, (tricking) is my way of taking everything that I feel ... and putting it into a physical form," says Coneys. 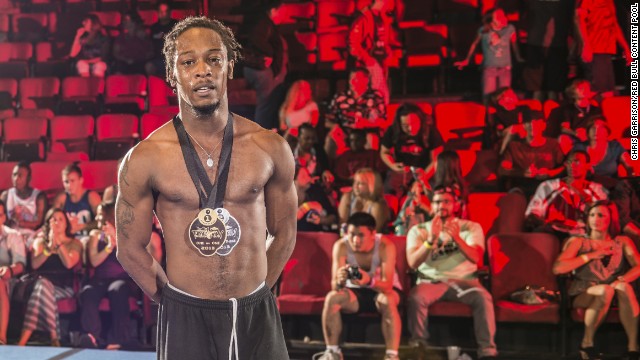 (CNN) -- A bare-chested man bursts athletically across the floor, flipping sideways, striking out a fierce kick, high above the heads of the screaming crowd. His rival hits back -- sliding across the space with a seamless stream of backflips, jump kicks, and aerial rotations, teetering on the corner of the mat, stretching backwards to recover his balance.

We are in warehouse-looking arena in Midtown Atlanta, where the referee is calling 10 seconds remaining in the battle. The shirtless man explodes forward once more, from standing, shooting agressively into the air with final, winning flip.

This is "tricking" -- a lightning-fast mix of martial arts, gymnastics and breakdancing that has spent 20 years quietly spreading across gymnasium floors and internet video sites, but is now set to burst out.

Read this: The street kid who grew into a 'Snake Man'

In the burgeoning world of tricking, 23-year-old Will Coneys is the new hero, the bare-chested, high-kicking victor in the Atlanta battle, and champion of tricking's first international "Throwdown" tournament on 24 August.

Coneys says it all started when he was a child, in Arlington, Virginia. He sat watching wide-eyed as Jackie Chan and the Power Rangers blazed across the TV screen with superheroic stunts and frenzied action sequences.

When he first heard of tricking it was little more than a hobby for likeminded teens with a fondness for impressive acrobatics.

I grab inspiration from just about anything
Will Coneys

Coneys had spent much of his youth studying dance and teaching himself to do gymnastic tumbling moves before taking martial arts lessons aged 16 -- ultimately earning a first degree black belt in taekwondo.

Through taekwondo he met the "trickers," a loose collection martial artists who congregated after karate competitions in dojos or on sprung-floor gym mats to show their most impressive jump kicks.

How do you become a contortionist?

In stark contrast to the restrictive worlds of professional dance and rhythmic gymnastics, Coneys found tricking to be fast and free. He and his fellow trickers showcased their own distinctive styles and gradually absorbed techniques from hip-hop dancing, capoeira, cheerleading and free-running -- and anywhere else their creative interests took them.

"Now I grab inspiration from just about anything," says Coneys. "I'll watch gymnastics, I'll watch martial arts movies or competitions, I'll watch dancing, even drawing and art and other artistic forms of expression.

"I pick up moves from action sports like skateboarding or bmx or motocross, and I'll start to break it down and change it into something I can do, on gymfloor or on grass, and put it in a different format for tricking."

The new champion of the Throwdown

In August, competitors from across the world assembled in Atlanta's Center Stage venue for tricking's inaugural Throwdown competition, arriving from as far away as Russia, Korea and Finland to meet the top athletes from the United States.

Watching a trick battle is like watching fireworks.
Rory Bratter

Rules were drawn up to pit teams of three against three, or individuals in one-on-one bouts, giving trickers just 90 seconds to show off their skills.

In full flow, tricking contests mirror breakdancing battles: turn-based competitions where athletes fire off runs in quick succession in a bid to impress the judges.

Arriving as a wildcard -- only being invited to compete after another contestant was forced to pull out -- Coneys went head-to-head with highly regarded athletes at the competition. Over four battles, the judges scored him highest across the five criteria they assess -- including kicking technique and trick difficulty -- and he stole the individual title.

Coneys believes the key to his success is his explosive technique, which sees him boosting his 5'6" frame incredible heights into the air to throw breathtaking moves.

"Watching a trick battle is like watching fireworks," he says. "These guys are going up in the air and the things they're doing are so explosive and powerful.

"I think the explosiveness of tricking is really what makes it so exciting. That and the competitors feeding off each other and trying to step each other up -- saying 'Oh that's a great move, but watch this!" and doing something even bigger."

For me, it's my way of taking everything that I feel... and putting it into a physical form
Will Coneys

Coneys says the sport "clicked" for him last year, and since then he's learned to use his movement across the gymfloor to express his own personality: "For me, it's my way of taking everything that I feel ... and putting it into a physical form."

At the same time, tricking has reached maturity as a sport. Bratter -- a veteran tricker in his own right, who has been competing since tricking's early days in sport karate tournaments -- says the incredible growth in popularity owes a lot to YouTube, where videos of popular trickers have accumulated hundred of thousands of views.

There is now a calendar full of meet-ups and open gyms where newcomers are encouraged to get involved and experience tricking firsthand. Top trickers are turning up in increasingly high-profile places, recently showing off their skills in movies, music videos, and at the VMAs and Grammy Awards. For Bratter the progress that the sport is making is "incredible."

"I've been in the sport about 20 years, and every year it just gets better and better and more and more crazy," he says. "I mean, these guys are really pushing the limits. The level that we had last year compared to this year is completely night and day.

"I can't even imagine what next year is going to look like."