Madonna to Anderson Cooper: Shedding a new ray of light on art and life

(CNN) -- Madonna wants you to start a revolution.

The superstar spoke to CNN's Anderson Cooper on Thursday about her new project, Art for Freedom. With it, she is inviting fans to submit original video, music, poetry and photography to fight oppression, intolerance and complacency through art.

Through Art for Freedom, she explains, "We have created this platform to give people around the world an opportunity to answer the question: 'What does freedom mean to you?' "

"I'm encouraging other people, whether they're professionals or not, to use their creativity to express themselves, to get a conversation going, to get the party started, really," Madonna told Cooper.

In September, Madonna revealed what was then only known as #secretprojectrevolution in 10 cities, including Los Angeles and New York City. Those in attendance were treated to a "call to action" film the singer created with photographer Steven Klein, in partnership with VICE Media and BitTorrent.

Cooper caught up with a relaxed Madonna, who joked that she was suffering from post-traumatic stress disorder after a grueling workout. But the artist was clearly passionate about the subject and even asked her son Rocco to wait a moment while the interview ran long. 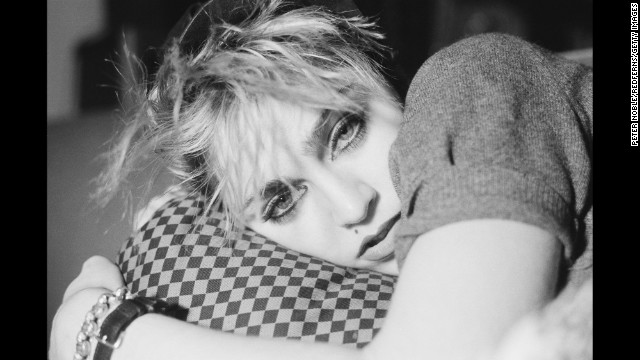 Over her long career, Madonna has been a genius at reinventing herself. Take a look back at how her style has evolved over the years, starting with this shot of her as she was first emerging on the music scene in New York in December 1982. 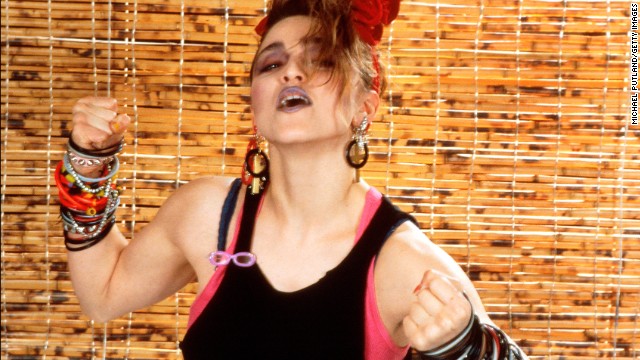 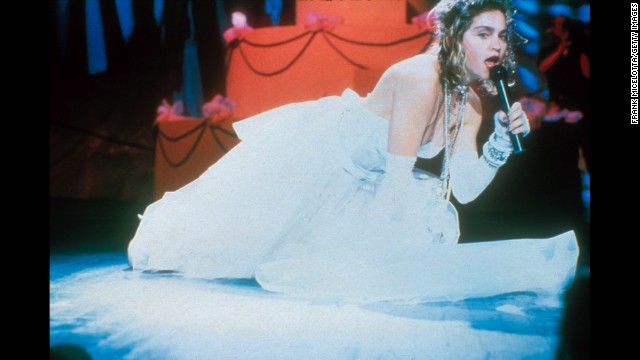 During the first MTV Video Music Awards in 1984, Madonna set the bar with her performance of "Like a Virgin" wearing a low-cut wedding gown. 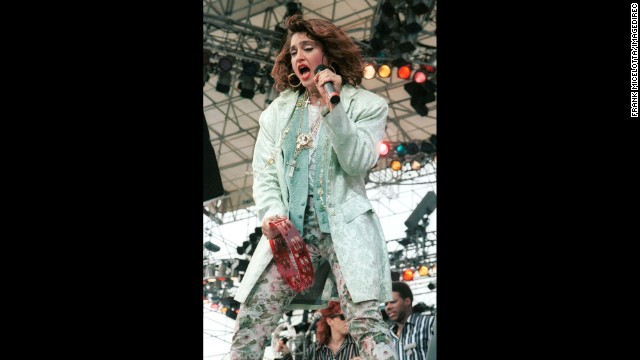 The "Material Girl" performs to a sold-out crowd during the Live Aid concert in Philadelphia on July 13, 1985. 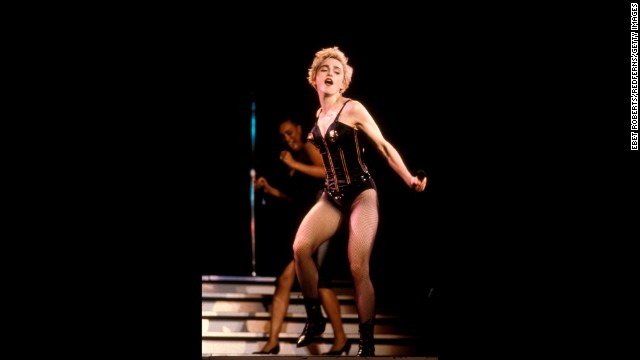 Ever a fan of the bustier, Madonna struts her stuff during the 1987 "Who's That Girl" tour. 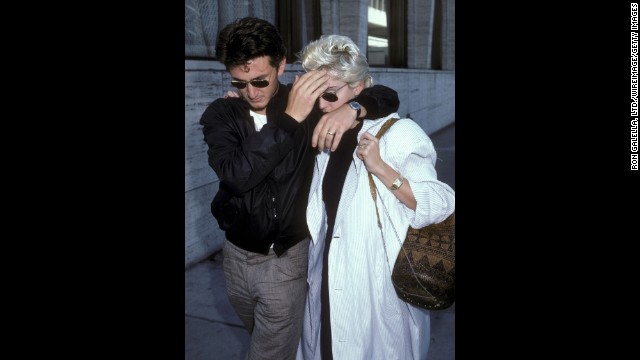 Then-husband Sean Penn shields Madonna from the paparazzi during a lunch break in New York City on August 13, 1986. 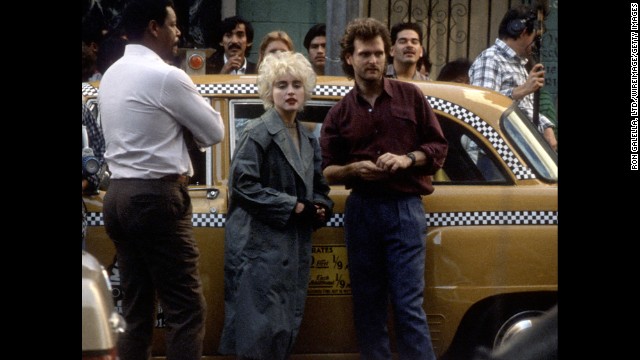 Madonna and director James Foley work on the set of "Who's That Girl" on November 24, 1987, in Los Angeles. 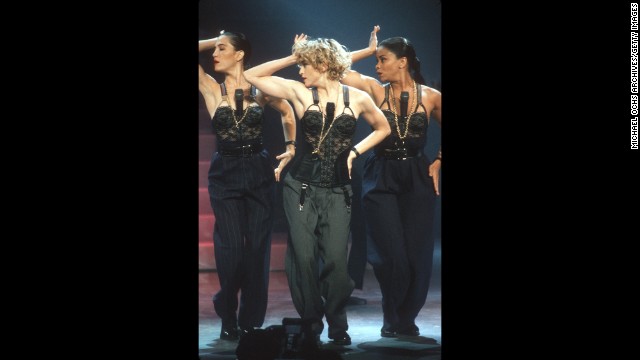 Back to the bustier: Madonna and her backup dancers perform in Los Angeles in September 1989. 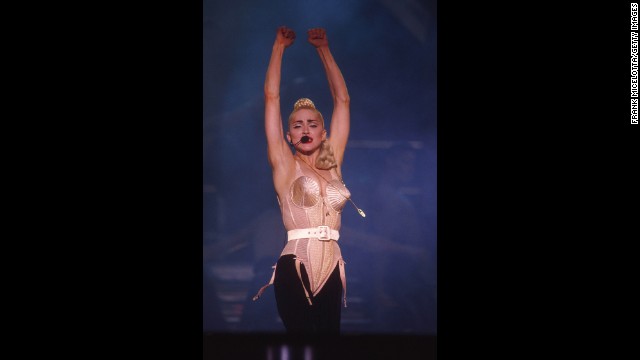 The Blond Ambition Tour took Madonna to Tokyo on April 4, 1990. 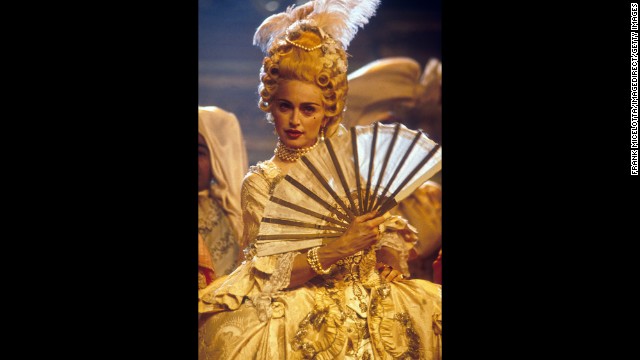 Madonna "strikes a pose" during her performance of "Vogue" on the MTV Video Music Awards in September 1990. 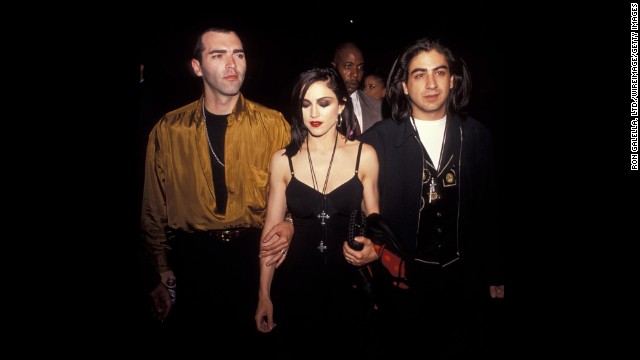 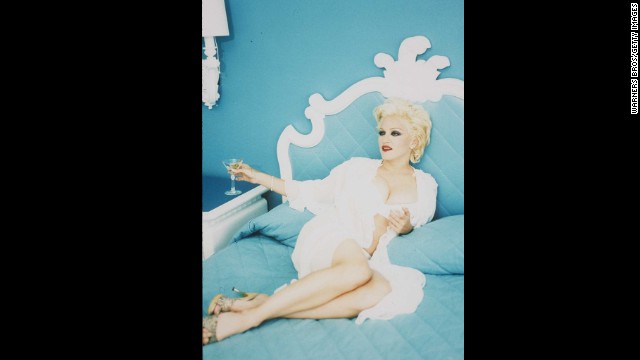 Madonna evokes old-school Hollywood glamor in a publicity still for "Bedtime Stories" in 1994. 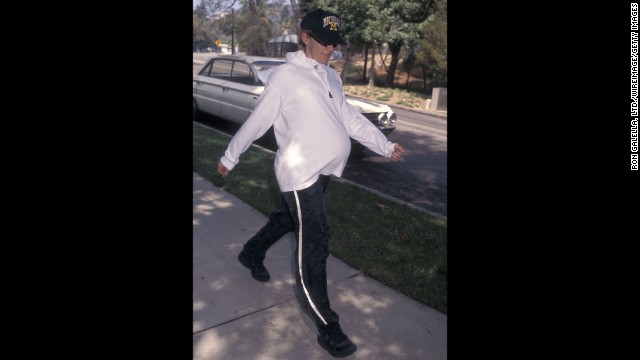 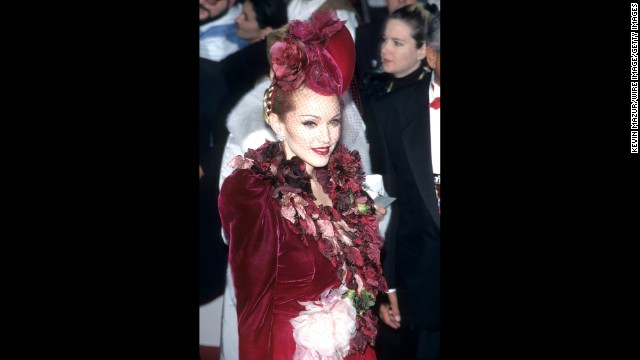 Madonna attends the "Evita" premiere in Los Angeles on December 14, 1996. 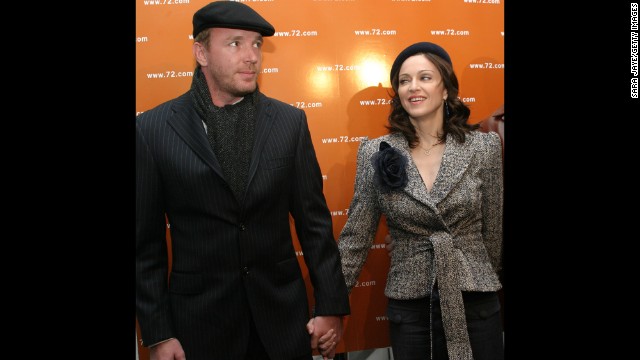 Then-husband Guy Ritchie and Madonna attend the launch party for "The 72 Names of God," a book by Rabbi Yehuda Berg, the co-director of The Kabbalah Center, at the New Museum for Contemporary Art in New York on April 24, 2003. Madonna's interest in Kabbalah, a mystic branch of Judaism, was widely discussed at this time. 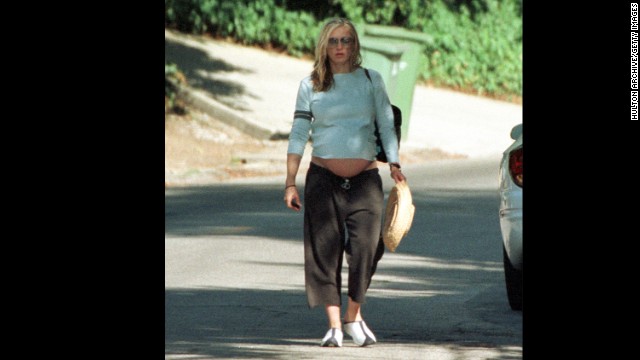 Pregnant with her second child, Rocco, Madonna walks to her car on August 11, 2000, in Hollywood Hills, California. 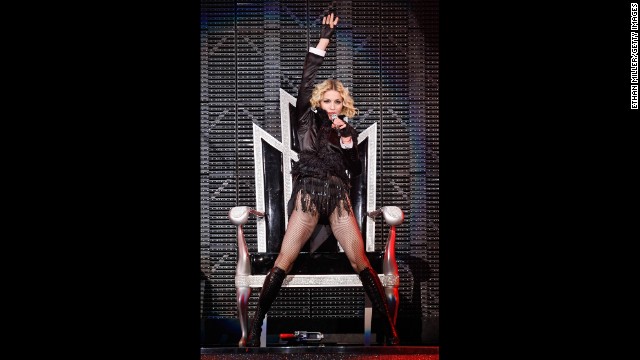 Performing during the "Sticky & Sweet" tour, Madonna sings onstage at the MGM Grand Garden Arena in Las Vegas on November 9, 2008. 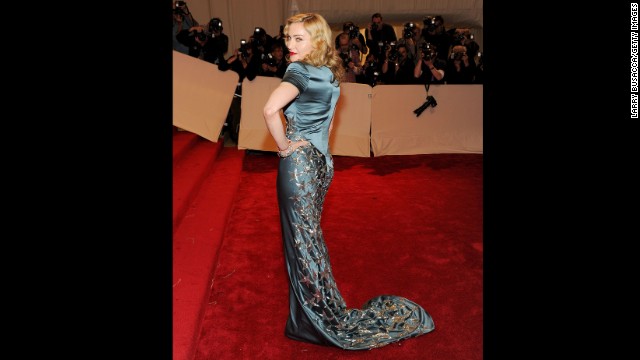 Madonna attends the "Alexander McQueen: Savage Beauty" Costume Institute Gala at The Metropolitan Museum of Art i New York on May 2, 2011. 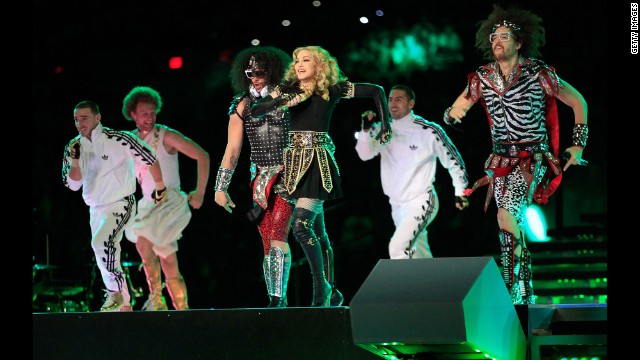 LMFAO and Madonna take the field during the halftime show of Super Bowl XLVI in Indianapolis, Indiana, on February 5, 2012. 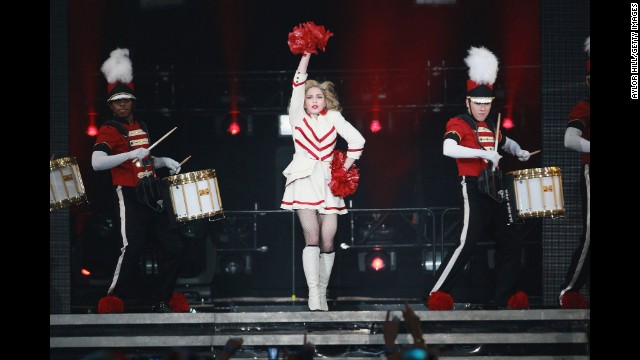 Madonna performs during the "MDNA" tour at Madison Square Garden in New York on November 12, 2012. 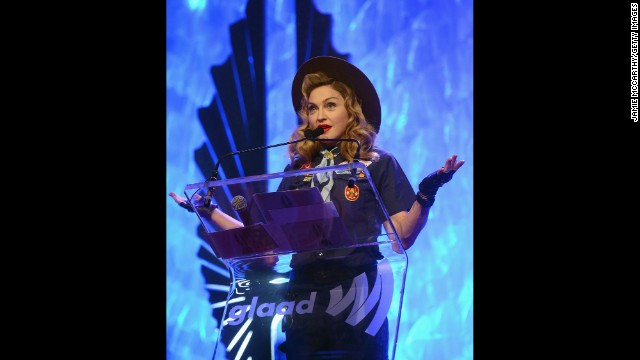 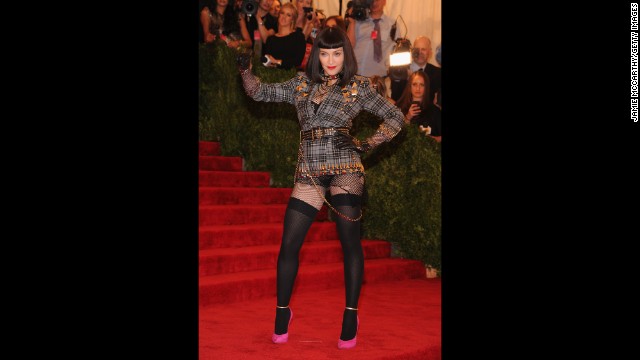 Madonna attends the Costume Institute Gala for the "PUNK: Chaos to Couture" exhibition at the Metropolitan Museum of Art ijn New York on May 6. 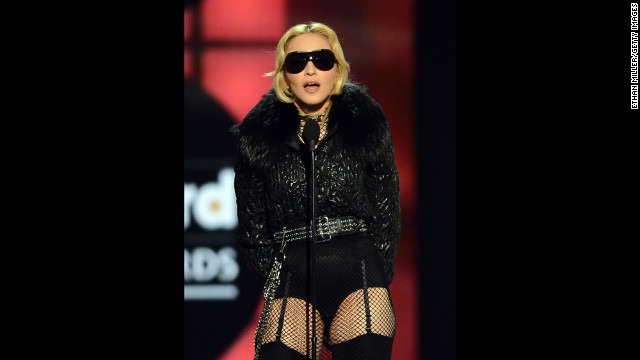 Madonna accepts the award for Touring Artist of the Year onstage during the 2013 Billboard Music Awards at the MGM Grand Garden Arena in Las Vegas on May 19. 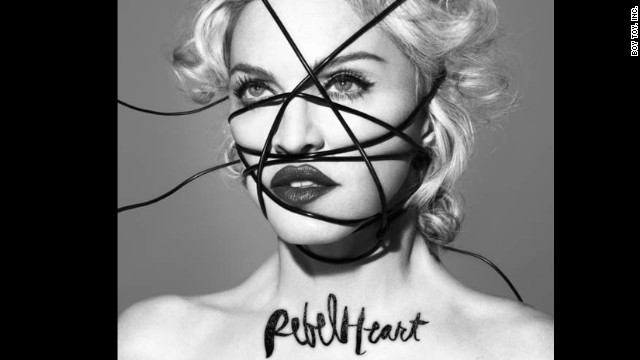 Madonna: Through the years

Cooper and Madonna had a wide-ranging conversation, touching upon her favorite quote from author James Baldwin ("I don't separate the human spirit from the artistic spirit") to what ever happened to that Boy Scout uniform Madonna wore to the GLAAD awards earlier this year. (Each of her kids claimed an article of clothing, but "I kept the combat boots," Madonna said. "I'll need those for my revolution.")

Here are some highlights from the interview:

Anderson Cooper: I've heard you call this project the most important thing you've done, besides raising your children.

Madonna: Yes. Obviously, I feel a great sense of responsibility being a good parent and raising my children. I don't take that job very lightly. Who they are, what they become and what they contribute to the world is very important to me. No slacking in that area, thank god, but the same goes with this film. I've put in I don't know how many man hours, I've poured my own money into it. Steven Klein has done the same.

We've done it for no financial gain, (and) also not to promote any product in particular. The only reason we're doing this is because we want to shed light on subjects that need to have light shed on (them). I do see that the world that we live in is collapsing to a certain extent, and civilization as we know it is caving in on itself.

I believe that we are at a very low level of consciousness, and we do not know how to treat each other as human beings. We are caught up in our own lives, our own needs, our own ego gratification. I feel a strong sense of responsibility in delivering that message.

Madonna: Get the fast facts

Cooper: It seems there is an optimism in what you're doing.

Madonna: Of course. I'm doing it because I believe in the ultimate good of humanity, but a lot of times push has to come to shove. I think you've noticed yourself over the years that, when do people really want to come to the rescue of others?

What I'm trying to say is, why do we have to be pushed to the worst-case scenarios to bring out the best in ourselves to be the best version of ourselves that we can be?

Cooper: I went to the opening of "secretprojectrevolution" in New York and you incorporated some words from James Baldwin. I'm not quoting directly, but he said, only the artist can truly see and describe the human condition.

Madonna: I believe that. And I think that it used to make a much bigger change in people's lives in the days when people were not censored. In the days when branding wasn't in charge. Now, in order for people to get their stuff out there, they have to be associated with a brand and once you start associating with a brand, unfortunately, the brand starts to censor you. And then suddenly it's not your pure vision anymore.

Imagine if someone like John Lennon or Bob Marley, Sid Vicious, Picasso, whomever, were doing their work and some corporation, some CEO, some branding entity was saying to you, well you can do that, but you've got to remove this aspect of your work. There would no longer be that purity anymore. We wouldn't have their gift.

We wouldn't learn from what they had to share with us. I'm all for noncensorship and freedom of expression.

Enjoy Madonna's Instagram video on her interview with Anderson Cooper as she gets a little housework done.