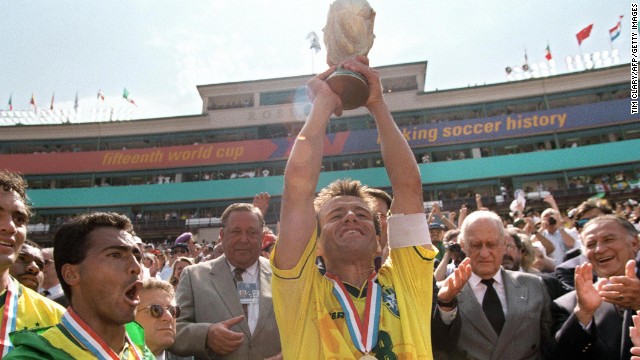 Dunga, who captained Brazil to the World Cup title in 1994, was fired by Internacional.
STORY HIGHLIGHTS

(CNN) -- Dunga, who won the World Cup with Brazil and later managed the national team, was fired by Internacional less than a year after he was appointed.

Internacional, which won the last of its three top-flight Brazilian titles in 1979, sits 10th in the 20-team elite division and has lost four straight in the league.

It trails leader Cruzeiro by 22 points.

The slump comes even with big-name strikers Leandro Damiao -- heavily linked with Tottenham of the English Premier League -- and Diego Forlan on its books.

But both are struggling in front of goal -- Damiao hasn't netted in the league since the end of August while Uruguay star Forlan's drought extends to July. He, however, has been injured.

Internacional, on its website, thanked Dunga "for his services" and congratulated the 49-year-old for leading the team to the state championship. Clemer Melo, coach of the under-20 team, takes over on an interim basis.

Dunga, a former Internacional player, won 26 of his 53 matches in charge, losing nine and drawing 18.

His last managerial job also ended in disappointment, as Dunga was dismissed by Brazil not long after it lost to the Netherlands 2-1 in the quarterfinals of the 2010 World Cup. Brazil led 1-0.

Read: The man who made Brazil cry

Brazil under Dunga was less free flowing and more solid defensively but entered the World Cup on a roll, having won the 2009 Confederations Cup and finishing atop the standings in South American qualifying.

Dunga's approach with the national team wasn't a surprise, given he was a robust defensive midfielder in his playing days.

He started every game at the 1994 World Cup and captained Brazil when it beat Italy on penalties in the final in Los Angeles.

Dunga played in the 1998 World Cup final in France, too, although Brazil lost to the host 3-0.