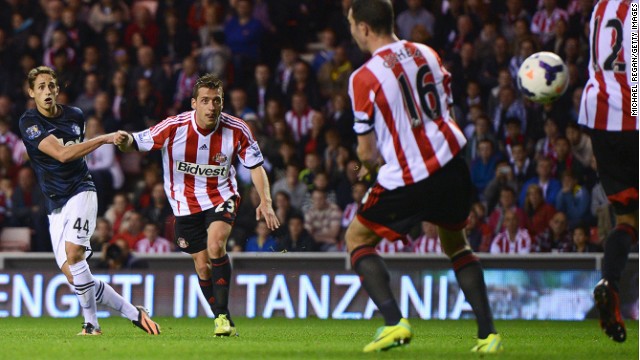 (CNN) -- English football seems to be experiencing something of a time warp. Liverpool and Arsenal jostling for top spot, Manchester United languishing in mid-table.

For 55 minutes of United's match at bottom club Sunderland on Saturday, it appeared that the English Premier League champion's worst start to a season in 24 years would continue.

Before kickoff, Liverpool had welcomed back 1990's title-winning manager Kenny Dalglish to a non-executive board role by beating Crystal Palace 3-1 to regain first place -- at least until Arsenal's trip to West Brom on Sunday.

Sunderland, still without a permanent manager to replace the sacked Paolo Di Canio, then took a shock fifth-minute lead as Craig Gardner capitalized on some inept United defending, with Nemanja Vidic inexplicably giving him the ball inside the penalty area.

For new United manager David Moyes, it raised the prospect of a third successive league defeat -- which last happened to the Red Devils 12 years ago.

But much like his predecessor Alex Ferguson's success in introducing young talent such as David Beckham in the 1990s, Moyes was rescued by an 18-year-old making his first EPL start.

Adnan Januzaj, yet another Belgian starlet to make his mark in England's top flight, first leveled with a cool sidefoot effort 10 minutes after halftime as he burst into the box to collect Patrice Evra's low cross.

The midfielder, born in Brussels to Kosovar-Albanian parents and who has thus far refused all Belgium international call-ups, then volleyed a sublime left-footed winner just after the hour mark.

For Moyes, who gave United striker Wayne Rooney his debut when a 16-year-old at Everton, Januzaj has every chance of joining the club's long line of top stars.

"I remember giving Wayne his debut and Adnan is certainly that quality. He's a top, top player," the Scot said after the match.

"I would have played him two or three weeks ago but it didn't work. We just never quite got the opportunity for different reasons, and I thought today was the right time and it was hard to stop him.

"He's going to be a special talent and he showed he's got goals and ability. We will keep his feet on the ground."

For the Anfield Reds, this is the team's best start to a season since the advent of the EPL in 1992, with five wins from seven games.

Dalglish's second stint as manager -- his first was the last time Liverpool won the title -- ended with the sack 17 months ago in the wake of mixed results and Luis Suarez's eight-match ban for racially abusing Evra.

Brendan Rodgers struggled in his first season as the club legend's replacement, not helped by Suarez's 10-match ban for biting Chelsea's Branislav Ivanovic.

Read: Chomp on a 'Zlatan burger'

That suspension spilled over into this season, but the Uruguayan's subsequent return has not hindered Liverpool's impressive start to the campaign -- indeed he has come back with a bang, adding another goal to last weekend's double against Sunderland.

His partnership with Daniel Sturridge continues to blossom, with the young England forward making it 2-0 against Palace with his sixth in the league and eighth overall.

"The two boys up front are as good as any in the league, so you know you're always going to be in with a chance with them two," Rodgers said.

Veteran Steve Gerrard celebrated his 639th appearance for Liverpool -- putting him seventh on the club's all-time list -- with his 99th EPL goal, netting from the penalty spot before halftime.

Palace boss Ian Holloway was aggrieved by that decision, with Dean Moxey's tug on Raheem Sterling appearing to be on the edge of the area, but had the small consolation of seeing his second-bottom side edge the second half thanks to a late header by record signing Dwight Gayle.

Manchester City bounced back from the midweek Champions League lesson against Bayern Munich by moving up to third place with victory by the same 3-1 scoreline against Everton.

On-loan Belgium striker Romelu Lukaku gave the home fans a sense of déjà vu as he put Everton ahead, with England goalkeeper Joe Hart again in question -- as he had twice been against European champion Bayern.

But Spain striker Alvaro Negredo leveled and Sergio Aguero made it 2-1 on halftime, before the Argentine's 69th-minute penalty hit the post and cruelly bounced into the net off the head of goalkeeper Tim Howard.

Aston Villa beat City last weekend, but this time could only draw 0-0 at promoted Hull in a result that left both sides comfortably mid-table.

Fulham moved out of the bottom three with a 1-0 win at Stoke thanks to a second-half goal from former Villa striker Darren Bent, who came on to replace the injured Dimitar Berbatov.

Newcastle joined Villa and Manchester United on 10 points after winning 2-1 at promoted Cardiff, with both goals from on-loan French striker Loic Remy.