Helicopters versus drones: The cost of the war on rhinos

"There's no question we're fighting a counter insurgency war here," he said. "As much as we increase the risk, all it will do is it will drive up the price of the horns, it will raise the stakes, the poachers will become more organized and better prepared to fight."

It's a problem across South Africa, but despite investment and innovation, unmanned drones, sniffer dogs and increased security have all failed to halt the rising tide of rhino slaughters, as poachers hunt the herbivores for their horns.

Decimated by illegal poaching, the endangered rhino has increasingly come under attack in recent years. In South Africa alone, the government is estimating 1,000 killings for 2013, while last year there were 668 slaughters. 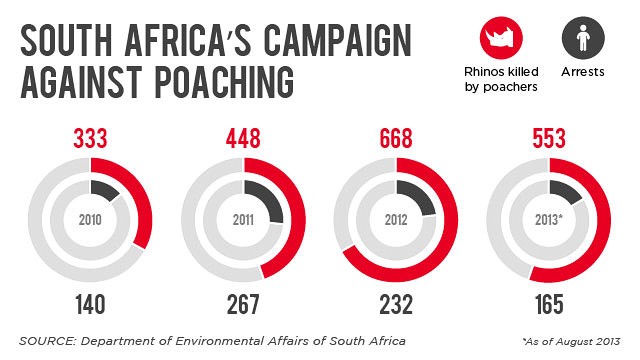 But poaching rhino horn is a lucrative industry with much of the loot sold on to the affluent classes in Asia, particularly China and Vietnam, where it is believed by some that the horns can cure cancer and boost virility.

With a kilogram fetching up to $20,000, a single horn weighs around 10kg, according to a report by Moses Montesh, a professor in criminology at the University of South Africa.

However, exact prices are hard to measure with some saying a kilogram is more valuable than gold by weight.

Montesh told CNN that some of the crime syndicates, getting rich off their relentless poaching, even include former army and police officers.

He said: "In some instances evidence suggests that private game operators are involved in rhino poaching. These guys are very familiar with all military and poaching techniques."

Montesh suggested that the South African armed forces could have a role to play in deterring poachers.

He added: "Currently our defense force is not involved in any military operation. I think this is an opportunity to keep our army active. The use of military drones can be handy."

But Julian Rademayer, author of "Killing for Profit," told CNN the crime syndicates, based in Mozambique and operating across the border in South Africa, are out of reach of the authorities.

You've got poachers being recruited in very impoverished communities in Mozambique and they're cannon fodder to the syndicates
Julian Rademayer, author "Killing for Profit,"

"You've got two levels, the syndicate crime that is untouchable," he said, "and then you've got poachers being recruited in very impoverished communities in Mozambique and they're cannon fodder to the syndicates."

In July, the government, led by President Jacob Zuma, openly backed a plan for a legal one-off sale of part of its billion-dollar stockpile of rhino horns in an effort to cripple the market.

The government's thinking was that it could flood the market by selling stockpiled horn and regulating trade. The move, advocates say, would send the current sky-high prices tumbling, thus remove the incentives for poaching, and ultimately help prevent further mass killings of the species.

But Kelvin Alie, director of wildlife crime and consumer awareness at the International Fund for Animal Awareness, told CNN legalizing the rhino horn trade could be "disastrous."

"A failed experiment such as this could result in the decimation of rhino populations," Alie said. "We should not even consider talking about satisfying demand, and especially not about flooding markets, when we have no idea of what demand is, particularly given recent rises in consumption."

Alie called on governments to make illegal rhino horn trading a priority in order to protect the animal.

He added: "An integrated enforcement strategy among police, wildlife, military, judges and custom officials is needed to effectively combat the trade."

Brent Swails contributed to this report.