'Half of a Yellow Sun': Thandie Newton, typhoid and a tale of civil war

London (CNN) -- One of the most eagerly awaited films to come out of Africa in recent years, starring Thandie Newton and Chiwetel Ejiofor, is hitting the big screen.

"Half of a Yellow Sun" recently premiered at Toronto's International Film Festival. The British-Nigerian production is about the Nigerian civil war -- the Biafran war -- that tore up the country between 1967 and 1970, and is an adaptation of Chimamanda Ngozi Adichie's bestselling novel of the same name. "It is essentially a love story set in the war," the film's Nigerian-born director Biyi Bandele told CNN.

CNN met with the UK-based playwright and director just before the screening of "Half of a Yellow Sun" at the London Film Festival. Sporting his dreadlocks in a hair band, the 45-year-old talked about Thandie Newton, typhoid and turning an award-winning book into a film.

"The book is an epic book," Bandele said. "It's about 500 pages long, and I had to make a movie that works under two hours. So I had to make some difficult choices when I was writing the script and it took me quite a few years actually to get the script right."

Read this: The movie they tried to ban

The romantic drama spans over a decade, starting with Nigeria's newly found freedom from the British rule in 1960, and continuing until the end of the fighting. It follows the fate of four people who become entangled in both their relationships and the civil war. It focuses on two wealthy sisters, Olanna (Thandie Newton) and Kainene (Anika Noni Rose), who, upon returning from their UK education, choose two completely different lives.

Newton's Olanna gives up her social status to live with the radical academic Odenigbo (Ejiofor), whilst Rose's Kainene becomes a successful businesswoman who falls in love with an English writer. Betrayals threaten to tear the sisters apart but soon they are both in the middle of the civil war turbulence.

A pioneer for Nigerian writers

Adichie's novel came out in 2006, and Bandele immediately started working on the script. He knew from the start that he wanted Newton to play the part of Olanna.

"I just felt she would be perfect. And it took me quite a few years to finally persuade her to accept the role," Bandele said. "(But) once we decided to shoot I was actually glad it took that long, because I was ready and I had the perfect cast. I mean, Chiwetel Ejiofor was just again another actor at the top of his game."

Part of the funding for the movie came from Britain, but it was all shot in Calabar and Creek Town in Nigeria. Originally, Bandele said, they had an eight-week schedule, but the tight budget meant cutting it short to five weeks instead. As if that wasn't enough, the shoot itself proved challenging to both the director and his crew.

Newton, born to a Zimbabwean mother and a British father, has described Olanna as the "most sophisticated, modern woman" she's ever played and critics have praised her performance as the highlight of her career so far. "It was a really tough shoot and Thandie was just always a member of the team and it was great," Bandele said of working with Newton. 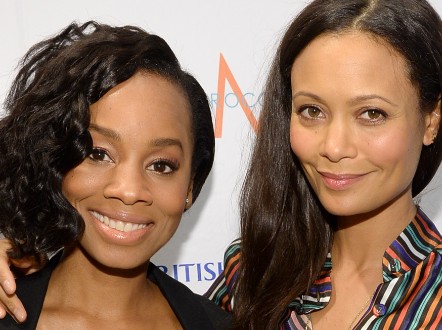 Anika Noni Rose and Thandie Newton
Michael Buckner/Getty Images
The budget we had and my mission were not completely compatible, but somehow we managed to pull it off.
Biyi Bandele

"The budget we had and my mission were not completely compatible, but somehow we managed to pull it off and I think we did because I had a great cast, an amazing crew and the support of the people of Calabar."

Read this: 'Star Wars' town disappearing into the desert

Bandele said he even had the support of the book's author, Chimamanda Ngozi Adichie, but that he was anxious to find out what she thought of his adaptation. "The day she came to see it, during the end of post-production, I didn't go into the production room because I was so nervous," he said.

"I also wanted her to respond however she wanted to respond, and when I heard that Chimamanda loved it I just sighed with relief."

"Half of a Yellow Sun" -- said to be the most expensive Nigerian movie to date, with a reported budget of $8 million -- is a milestone in Nigerian film. Nigeria is the second-largest producer of films in the world, after India, with around 50 movies per week.

To Bandele this is just the beginning. He is currently working on an online series called "Shuga" and has high hopes for the country's movie industry. "The future of Nigerian film is very good," he said.

"There are many young filmmakers right now out there. Some of them have grown up within the Nollywood tradition, others have gone to film school and you just have this mix of talent (and) lots of voices and I'm really excited."