Spice of life: How saffron could save Greek farmers

Krokos, Greece (CNN) -- It's a meticulous harvest which forbids the use of a spade, let alone tractors.

Crouched deep within a field full of purple crocuses, groups of villagers come together every year for a back-breaking fortnight, harvesting saffron.

With great precision, and grubby fingernails, flowers containing the rare, precious spice are snapped away from the stems and dropped inside white buckets.

Read more: Europe would have suffered without single currency

Within the purple petals lie two or three strands of saffron. These red threads are helping the villagers survive Greece's economic calamity.

When CNN joined them on the final day of a two week harvest the sun was out, with the November heat bearing down on the pickers' backs in the fields around Krokos, a small town in the north of the country.

Read more: Maastricht: The birthplace of the euro 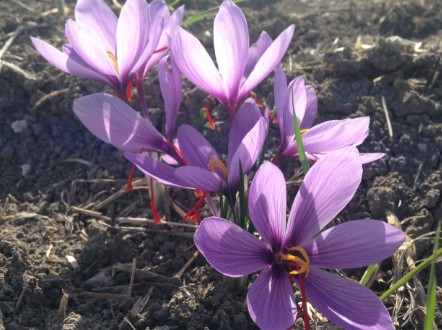 A Greek Saffron plant in bloom.
PHOTO: CNN
I was hoping to live in Athens but now with the whole economic crisis it's really hard to find a job
Zisis Kirow, student

Among them were young men and women who'd previously left the village in search of jobs in Athens which did not materialize.

One of them was Zisis Kirow, a young man in his 20s with two degrees.

"I was hoping to live in Athens but now with the whole economic crisis it's really hard to find a job that covers your needs," he said.

Read more: Spain turning back the clock on siestas

"I was studying civil engineering.. but whether you want it or not, you have to come back to your family."

By late afternoon, the local coffee shop became the center of attention as it slowly filled. The harvest was almost done.

Tourism a lifeline for Greece

Retirees with gray-stubbled, weathered faces burst into loud debate. They struggled to hear themselves above the booming TV mounted on the wall.

Read more: A history of defaulting on debt

On the local news was the respected president of the local cooperative, Nikolaos Patsiouras. He's an outgoing, gray-haired Greek who turned his back on taking a corporate approach to business.

"We have never tried to work as a multinational corporate business," he said.

"We have a board of 50 people and whatever we produce - we package them and we sell them. We keep 10% for the coop expenses and the rest we give to the producer. Our main aim is not to get high benefits."

This year's harvest has not been huge. It takes 150,000 plants to produce a kilo of saffron. Dry weather left the co-op with 1.5 tonnes this year- that's tiny compared to the global annual production of 200 tonnes.

They're competing with produce from Iran and Spain, but many chefs regard Greek saffron among the best in the world, providing the villagers with some financial stability.

"For some people this is their main business and way to get money. For others, it is an extra activity," Patsiouras said.

"Young people have to take this seriously and treat saffron harvest and production as a real job.

"If they cannot find work, they can at least have some money to get by, thanks to saffron."

As Greece enters a new economic phase of optimism with a stockmarket rebound, it has yet to translate into more jobs, especially among the young.

But as the saffron farmers of Krokos export their wares to the rest of the European Union, the U.S. and beyond, it seems they have found golden opportunities in difficult times.